Birmingham Royal Ballet’s new Nutcracker streaming is very much about investing in company and student dancers at the most difficult of times for the performing arts.

Just before Christmas last year, Birmingham Royal Ballet and The Birmingham Repertory Theatre joined forces, to live stream a performance of an adapted version of Sir Peter Wright’s The Nutcracker, specially revised and staged by Carlos Acosta and Sean Foley. As a result of the ongoing restrictions of the pandemic, there was no physical audience present in the auditorium, but it was enjoyed nevertheless by over 9,000 households worldwide. They are about to repeat the streaming with a different cast (15 – 24 February 2021).

As Birmingham Royal Ballet’s Artistic Director, Carlos Acosta must surely still be chomping at the bit with frustration and the challenges that were presented to him during his first year in the post. But if he is feeling that the rug is constantly being pulled from under him, his determination proves indefatigable. He is one of the few directors of a top ballet company to risk commissioning a new work: the hugely successful Lazuli Sky by Will Tuckett, and to see that work performed live to socially distanced audiences, albeit briefly, at The REP and at London’s Sadler’s Wells.

However, one of the ongoing issues for all professional dancers in the current climate, is the disruption that isolation, training on Zoom and the lack of live performances, has dumped on them in what is generally a short career anyway. Through necessity, it is possible that streaming has changed the perception of what audiences can access. Yet whilst it has reached a wider audience, it has not replaced the thrill of live theatre. And for the artists themselves, the loss of performing and the uncertainties of the future have been a devastating experience.

Acosta recently said in an interview that he feared for those dancers who are nearing their peak. But the brevity of the career means that every year counts – missing a season (or two) can alter the hoped for and expected route. In every company that was previously able to schedule multiple performances of a single programme, there was the prospect of many opportunities for casts/dancers at all stages of their careers, changing roles, increasing their repertoire. There were dancers regularly being offered new, perhaps solo or principal, parts that they may not have tackled before. This is how a company builds its artists and the future of the art form.

With that in mind, Acosta is also focused on those in their final years of training, and on giving them opportunities. Every student needs stage experience, and The Nutcracker, prior to Covid-19, gave budding dancers and students in productions all over the world, a taster of what might lie ahead for them. In 2020, with bubbles and masks and no physical contact, The Nutcracker, in whatever shape or form, became an operation of military precision.

Birmingham Royal Ballet’s Nutcracker, alongside its sister company The Royal Ballet which also performs a production by Peter Wright, has always been a vehicle for children and students to flex their dancing feet from a very early age. Dame Ninette de Valois, founder of both the companies and The Royal Ballet School, always said, “Respect the past, herald the future, but concentrate on the present.” How apt these words are today, resonating in all quarters of the Arts. It’s hard to believe that the school was founded as long ago as 1926, and with the Royal Charter in 1955/56, became The Royal Ballet School. De Valois too, was intent upon nurturing the young talent of the day, deeming it essential that students are tested within the context of professional performances in order to make the most of every opportunity for development. Because of the pandemic, opportunities must be grasped and held tight.

In Birmingham Royal Ballet’s upcoming streaming, three of The Royal Ballet School’s graduate year students, Amir Khan, Louis Dobbs and Thomas Gerhardt, have been given the chance to perform with the Company in featured roles, (in the Arabian and Russian dances) alongside the professionals. As well as this, students from Birmingham-based Elmhurst Ballet School perform the whole of the Snowflake scene.  Elmhurst is very much part of the West Midlands hub of the arts, with a powerful focus on the dance community. Since its relocation to Birmingham in 2004, the school has maintained an ongoing and beneficial association with the Company.

In Alan Yentob’s recent (and excellent) BBC programme Imagine… We’ll Be Back?, which relates the dilemmas and plights faced by many arts organisations, Birmingham Royal Ballet and Acosta feature in a positive light. There are moments when Acosta hints that motivation is difficult when training from a kitchen or living room. But in almost every case, a passion for one’s chosen art form began in early childhood, sometimes obsessively. To dim the bright lights of the future, for any aspiring dancer, is a nearly impossible task, as the desire is stronger than ever. Who would wish to give up hope, when this is all they have known?

If anyone has the ability, the tenacity and an abundance of inspirational qualities, to bring the Company through these testing times, it is Carlos Acosta. His candid handling of the many interviews he has given, makes this even more certain. He is honest and realistic about what can be done; has a track record of thriving in the face of adversity, and has already proved that there is no hurdle too high or too great – even in times like this. Indeed, he is giving us much to look forward to, of which this newly cast Nutcracker is the latest example. A final word from Carlos himself:

“Joining a professional company like Birmingham Royal Ballet in live performance helps polish the learning of young dance students. The pandemic has shrunk those vital opportunities for students to develop their artistry as they prepare for professional life themselves. When you join us online from your homes for The Nutcracker, please do applaud particularly loudly for these remarkable young dancers, and celebrate their drive and commitment – the future of the art form in this country” 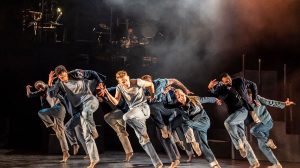