The problem with dance responses to “our unprecedented times” is that too much is in flux for such a work to seem anything other than inchoate. This was demonstrated with the first offering in Sadler’s Wells’ final programme of excerpts for its Dancing Nation streamed extravaganza. Anthony and Kel Matsena’s Shades of Blue encompassed Covid-19 and the Black Lives Matter movement, starting with its six dancers pinned down by the spotlights from a fast-descending lighting rig. This dramatic opening was followed by muscular hip-hop movement imbued with twitching anger, the dancers isolated or among the frenetic buzz of a demonstration being broken up by police. Hands were held up in surrender, held behind their backs as though they were handcuffed, formed into guns; placards were waved. A female dancer as police officer repeatedly stood on a prostrate male dancer’s back; each time he rose up further, finally standing with her on his shoulders. Kel Matsena offered a heartfelt spoken-word piece to an empty auditorium – then turned to face a bank of blue flashing lights, dry ice and shadowy approaching figures, heavy on the “alien encounter” vibes. So, plenty of urgency and some striking images, but not much to hold it together and little reflection.

Kenneth Tindall’s modern ballet piece States of Mind fared better for keeping things more abstract. First performed in October for Northern Ballet’s Contemporary Cuts mixed bill, this comprised three movements, linked by a portentous Hugh Bonneville voiceover, that took on the emotional experience of the pandemic. For the first, the dancers moved with frantic limbs to a Bach violin sonata, working apart or in confrontational duets, where one half was circling and demanding, like dark thoughts of anxiety and anger, the other attempting to keep them at bay. The mood changed for the second part, built on a Yo-Yo Ma cello solo, as five isolated female dancers performed a lament for their separation and loneliness, full of yearning extensions and downcast gazes. Finally, a ray of hope: “The answer is in giving love,” we were told (do be quiet, Hugh) and three couples proceeded to show through Tindall’s lovely choreography of caught falls and tender balances how heartwarming it is to see two people supporting each other.

Shobana Jeyasingh’s Contagion is not another panicked response to the news – it was created in 2018 as her contribution to the World War One commemorations, remembering the devastating Spanish flu epidemic that followed hard on the heels of the conflict. Even though this was just an excerpt of the 30-minute piece, and the advantages of its original site-specific staging were stripped away, its considered power was evident. It has resonance now because it is, fundamentally, an excellent piece of work. Eight female dancers moved among white boxes – coffins, tombs, sickbeds – as we heard diary extracts of the horrors people lived through, and descriptions of the influenza’s terrible effects on the body. From a beseeching line of mourners, the women morphed into the virus itself, twisting, flexing, juddering, never still, like something from a horror movie; then writhing victims with stretched mouths. Finally, as solarized animations of patients were projected on to the sides of the boxes, they became the caregivers, offering serenity, soft movement, stillness and dignity.

To end this final programme, we got the climax of Rambert’s Rouge, a piece created for the company in 2019 by the French choreographer Marion Motin. Seven dancers, some down to their undies, bathed in red light and strafed by strobes, produced a prolonged sequence of attitude-drenched, flash-mob-style synchronised movement to a pounding score by Micka Luna, supplemented by an onstage guitarist. When I watched it from the Sadler’s Wells stalls in 2019, it seemed to add up to a whole lot of nothing – now, the mere suggestion of a rave is enough to leave me breathless with excitement, so it felt like a fitting bang to go out on. 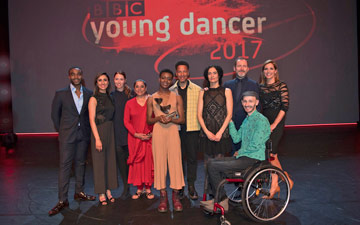