As always, it’s a pleasure to see the Joffrey Ballet, especially since 2007 when artistic director Ashley Wheater assumed his post and began a terrific revival of the company following lean times under Gerald Arpino. An even greater pleasure is to see that two of the evening’s works were commissioned from San Francisco Ballet choreographers Val Caniparoli and Yuri Possokhov, as part of Wheater’s plan to expand the company’s repertoire.

Caniparoli, while not a household name outside the dance world, has a list of works as long as your arm (written in 12 pt font), created for dozens of companies across the continent. He covers just about all styles – modern, ethnic, jazz, even ice skating – overlaying them on a classical ballet base. His Incantations, premiered in 2012, perfectly showcases this company’s dancers. Employing an other-worldly chime-filled score of the same name by Alexandre Rabinovitch-Barakovsky, Caniparoli gives them an impressive range of movement textures from fleet-footed to languorous, all relying on their focused energy and esprit de corps. While nothing (choreography, costumes, set design) stands out as wildly innovative, Caniparoli is a master craftsman who knows how to use all the elements together to make a satisfying ballet. In fact, of the dozen or so of his pieces I have seen on local companies (Smuin, Diablo, San Francisco Ballets and Imagery) I have yet to see anything less than well-composed ballet, with an organic flow to the steps, logical development of movement motifs and musicality.

Stanton Welch, artistic director of Houston Ballet, is no stranger to the Bay Area either, having mounted four pieces on San Francisco Ballet, with mixed results. Son of Chamber Symphony is the title of both the dance and the music by John Adams, yet while the moniker seems to hint at a Hollywood horror movie, the ballet deserves a name of its own. I make it a practice not to read program notes before seeing a performance and I always hope that the choreographer will successfully convey all stated intentions through the movement instead of relying on the written word to accomplish the task. For me Welch wasn’t able to live up to his own words. Dance is non-verbal communication that requires translation from idea to stage by a different, often mysterious, channel. Welch says, “so much of ballet is about hiding the the difficulties and seeking to attain seamless movement. Here I want to show the seams.” Instead, to my eyes, his work appears as generic modern ballet with obvious nods to traditional classical ballet variations, outright snippets in fact. There is no apparent rhyme or reason for this except in a program note in which Welch says he “wants the audience to feel familiar with what they are seeing, but it is not important for them to know exactly why.” So in that sense, he does succeed. At least the dancers bring their verve to the task and prove yet again that a great performance can counter so-so choreography.

Eleven minutes of heaven. Twice. By that I mean seeing Possokhov’s Bells pas de deux, first at the SF Ballet Gala and now at the Joffrey Ballet, and on both occasions it is the best piece of the evening. Watching two very different casts is akin to listening to two actors recite the same Shakespeare sonnet. The steps remain the same, but the interpretation reveals so many different facets that it’s almost as if they were to two distinct dances. Poetry of the highest order, and I choose that term deliberately because this brief piece, set to the second movement of the Rachmaninoff Piano Sonata no. 2, has that intense distillation of meaning and imagery that a poem yields, in contrast to the more rambling and elusive quality of prose or a twenty-five-minute ballet.

Bells was created in 2011 on Joffrey dancers Victoria Jaiani and Temur Suluashvili, who danced at this performance. Every gesture is coloured with delicate nuance, authentic feeling, or even overwhelming emotion, all of which mask the underlying technical strength and precision these two bring to this exquisite choreography. Possokhov gives this W.H. Auden quote in the program: “Each lover has a theory of his own, about the difference between the ache of being with his love and being alone.” It isn’t necessary to read it; it is imbedded in the piece itself.

Swedish choreographer Alexander Ekman’s Episode 31 is a great way to close the evening, largely because it is so unlike the first two ballets and reflects a European sensibility. It opens with a mini-documentary showing the company in rehearsal for the piece as well as performing portions of it on the street and on the El (elevated train) in Chicago. While not necessary to the ballet itself, it offers an insight into how the dancers work together to create a tight camaraderie.

Despite obvious influences – a handful of Forsythe with repeat curtain risings and fallings, a dash of Nederlands Dans Theater with dark moody lighting, and even a tip of the hat to butoh as a man in a suit very slowly circumambulates the periphery of the stage during the entire performance – Ekman is very adept at instilling a visceral flock instinct in the dancers, where they move as one body, motivated by the same set of stimuli, and the effect is enthralling. He also has a broad palette of movement from the sharp gutsy rapid-fire to thoughtful delicate and tender, which he arranges in a constant flux. Even the costumes mimic this as they are always changing, with the addition or removal of jackets, shirts, pants, shoes. Best of all, the choreographer gets dancers who can rise to his expectations and the excellent dancers get the choreography they deserve.

It is my hope that presenter Cal Performances will find a way to bring the Joffrey Ballet back every year, as they do the Mark Morris and Alvin Ailey companies, and give them a full week so they can show off more of their repertoire. 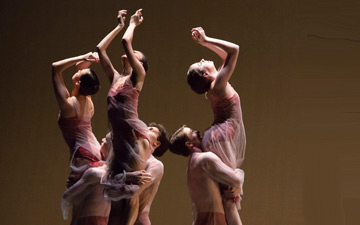 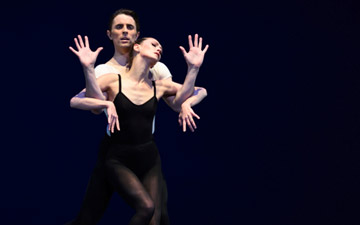