I have often puzzled over the logic of how San Francisco Ballet chooses the ballets on each of the mixed bills in one season. This means first deciding the fifteen to eighteen pieces to present, then putting them in groups of three, and finally figuring out the order of the three on each program. The conductor of an orchestra must wrestle with the same sorts of choices and I believe there is an art to doing this well. The process involves weighing historic and stylistic breadth, challenging the performers and appealing to the audience. Program 7, which I saw Tuesday and Wednesday evenings, made me think a lot about this tricky issue because this program is a weird sandwich made with a delectable gourmet filling between slices of bland Wonder bread.

Tuesday evening opens with a revival of Criss-Cross, Helgi Tomasson’s neo-classical work from 1997. The ballet is in two parts with casts of five couples and a principal pair on each side of the divide. The first portion is set to a mish-mash of Scarlatti (one movement from each of three concerti and two movements from a fourth) arranged by Charles Avision. The choreography is equally disjunct, utilising short phrases that often consist of the same step repeated three times. These phrases are then mixed up and repeated again and again with no development or embellishment. In the right hands simplicity can be a virtue, but here the simpleness and repetition makes for a Gertrude Steinesque ballet – a step is a step is a step.

The second half fares a bit better, being accompanied by Arnold Schoenberg’s Concerto for String Quartet and Orchestra No. 6 in D (after Handel’s Concerto Grosso, Op 6, No. 7.) The dancers would benefit from getting to perform a more complex work instead of one that seems made for a school graduation showcase. All the lead couples, Vanessa Zahorian and Davit Karapetyan with Yuan Yuan Tan and Vito Mazzeo on Tuesday, and Maria Kochetkova and Taras Domitro with Dores Andre and Vitor Luiz on Wednesday, danced admirably, given the limitations.

When Yuri Possokhov’s Francesca da Rimini premiered last season, I was swept away by its intensity. Dante’s tale of illicit love and terrifying revenge is powerfully present in Tchaikovsky’s score and Possokhov has matched his organic movement phrases to it perfectly – there isn’t a false step anywhere. This season it is even better. Tonight the three principal roles, Francesca, Paolo and Giovanni, are danced by the original cast – Maria Kochetkova, Joan Boada, and Taras Domitro respectively. I can never say enough good things about the Kochetkova and Boada partnership. Last August I interviewed her before the London tour and asked her about their working together. She confirmed what is evident on stage: as if by magic, they simultaneously inhabit the identical time and space and are working toward the same artistic goal. Here they reveal passionate love overlaid with desperation, ecstasy on the verge of devastation. That their superb musicality underlies every gaze, step and gesture only makes the end more wrenching as perfect harmony is destroyed. Domitro’s chillingly profound evil, by contrast, makes the tragedy even darker. Holding a jeté à la seconde, for an impossibly long time, high in the air, he’s like a sword about to slash, and in a lunge facing the adulterous couple, with his wrists crossed on his knee, he becomes a cobra waiting to strike. The five Court Ladies in red and the three Guardians of the Inferno are all excellent. As soon as the curtain comes down the crowd is up on its feet, cheering and clapping enthusiastically.

The next night, even with a different cast, the audience again gives a standing ovation. These dancers deliver very commendable performances: Frances Chung, as Francesca, is still finding her way emotionally. She is an exceptionally precise dancer but could sacrifice some perfection for expression. Carlos Quendit’s Paolo is ardent and it would be interesting to see him matched with a partner more in tune with his sensibilities. Vito Mazzeo shows a more complex Giovanni, one who allows his feelings of injured pride to slip through his mask of jealousy and hatred.

Balanchine’s Symphony in Three Movements is a marvel of both intricacy and simple bold design. Now we see how much Tomasson was inspired by his former director, even if he didn’t come close to the master’s level of accomplishment. The opening diagonal line, sixteen women in white leotards, reaches all the way from the left downstage corner to the right upstage one. Stravinsky’s initial percussive blasts of brass and the windmilling limbs of the women command immediate attention. The power of this unison is only slightly diminished by the varying angles of the arms in the deep lunge those all need to point in the same direction. But, in general, the corps de ballet goes on to stay in synch most of the time. Jaime Garcia Castillo catapults onto stage in a soaring jump and continues to impress with his elegant line and fluid movement, so much so that he unintentionally overshadows his partner, Sasha De Sola. The other two principal pairs – Sarah Van Patten and Carlos Quendit, and Clara Blanco and Lonnie Weeks – are better matched to each other and create true partnerships of mutual interaction.

The second movement pas de deux is very satisfying as Van Patten shows a playful side and Quendit reciprocates. The third movement fills the stage with all thirty-two dancers for a finale that, while choreographically complex, seems oddly without driving energy: no bang, just suddenly, it’s over.

Wednesday night’s cast has some performances that stand out: Dana Genshaft and Hansuke Yamamoto sharply define their steps and their interplay. Yamamoto repeatedly shows the best form of any of the men in the signature jump – knees tight together, tucked up so he’s almost sitting on his heels in the air.

Yuan Yuan Tan proves once again how well she does Balanchine. She has a purity that I find refreshing when compared to the often affected manner of many New York City Ballet dancers. And her partner, Vito Mazzeo, has me running out of superlative adjectives. He knows how to fill the spaces both small and large, from the ones he creates with Tan to the ones that encompass the stage. Unfortunately, the good dancing isn’t enough to buoy up the whole ballet and the evening finishes hanging limply in the air. 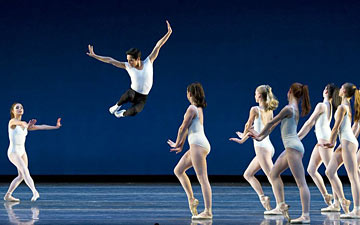 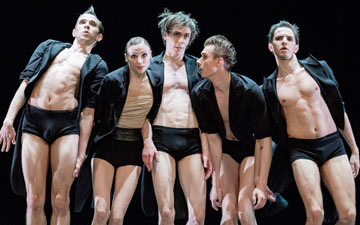