It’s hard to imagine people walking out of the theatre after seeing La Fille mal Gardée without smiles on their faces. As performed by the Paris Opéra Ballet, Fille is a delight from the beginning of the overture through to the last curtain call by way of chickens, clogging and most of all crisp, eloquent, choreography.

Central to the enjoyment are the legendary Osbert Lancaster designs in bright and enchantingly vivid colours — in such a happy ballet, it can’t be a coincidence so many characters end up wearing bright yellow. The costumes and his impeccably detailed sets take us, convincingly, from Lise’s courtyard, through the French countryside, into the harvest fields, and home to the Widow’s. The music, beautifully played by the Paris Opera orchestra, was buoyant, and the corps uniformly excellent. I had the sense everyone involved in the production was happy to be there.

As Lise, Muriel Zusperreguy was strong, and saucy, unafraid to go after what she wanted. When she pulled her mother’s cap over her face, she did so with a vengeance; she attacked her steps with vigour and seemed strong and secure throughout. Both her first act pas de deux with Colas, with their tricky ribbon work, were no problem for her. She sailed through the mime in act two, convincing everyone of her daydream: having a family of her own.

Florian Magnenet seemed very comfortable in the character of Colas, attractive, charismatic, and believable in his love for Lise. While he struggled with his turns at the end of the ballet, he showed off his long legs beautifully in his act one solos. Magnenet also displayed excellent comic timing, emerging from the stack of hay bales at exactly the right moment, surprising Zusperreguy’s Lise, and made convincing fun of attempting to hide when the Widow Simone returned home.

Zusperreguy and Magnenet seemed genuinely attached. Their secure partnership was particularly evident in the short scene when Colas, locked out of the Widow’s home, reaches through a high window to partner Lise down below. Even separated by her mother, they’re able to dance together, completing turns, lifts, and promenades… and sneaking kisses.

A highlight in any production must be the clog dance, led here with great alacrity by Aurélien Houette as the Widow. Houette slipped and slid, full of pleasure at being the centre of attention, and seemed reluctant to relinquish it for the rest of the ballet. As Alain, Allister Madin was heartbreakingly serious, valiant and awkward in his attempts to partner Lise. He made small moments, such as the one when he removes the wedding ring from his finger in act two, full of pathos. He was the awkward boy everyone makes fun of and nobody likes—it was a good thing he had a father who loved him (Alexandre Carniato) and made even stroking his son’s hair into a set-piece of hilarious timing.

Earlier in the run, I saw another marvellous cast. Simon Valastro, as Alain, was completely committed and broadly funny, trying his best to steal the show. That’s hard to do, though, when Myriam Ould-Braham and Josua Hoffalt play Lise and Colas: the roles fit them like second skins. Ould-Braham had just been made étoile (check out the video above and this official and nicely longer video on the Paris Opera website) and her performance seemed, to me, buoyed by an extra layer of joy and happiness. Hoffalt was completely at ease in both technique and characterization. When they celebrated their wedding onstage, the audience went crazy.

Yet while Fille’s final scene is a wonderful, uplifting celebration of Lise and Colas’s love, it’s got one terrible aspect: seeing it means the ballet is about to end. And who wants that? Even though it shows us a rainstorm, Fille is full of sunshine and delight.

Rachel Mann originally studied ballet and dance at the University of Utah before switching from performance to academics. She received a doctorate writing about the connections between nineteenth-century ballets and novels. She is currently a freelance writer/editor living in Paris where she continues to see much dance and is now starting to write for DanceTabs. 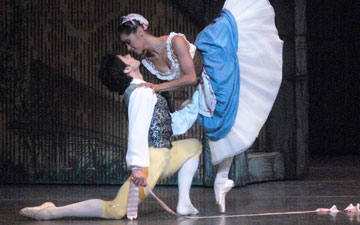