San Francisco’s second programme was better balanced than the first, with contrasting works created for the company within the past two years. The pick-up orchestra, conducted by SFB’s music director Martin West, was less exposed than on the opening night (in Mozart’s Divertimento No 15 in B flat major). All three ballets were framed by backdrops instead of relying solely on lighting.

Helgi Tomasson’s Trio (2011) is set against an Italianate background appropriate for the choice of music, Tchaikovsky’s Souvenir de Florence string sextet. Each movement has inspired a separate chamber ballet, with some casts reappearing in different costumes.

The opening ensemble, in formal plum-coloured outfits, dance like decorous courtiers at a festive gathering. They escort the glamorous central couple, Vanessa Zahorian and Joan Boada. He promenades her gallantly and enables her long legs to flare upwards in lifts. He displays his prowess in virtuoso manèges.

Tchaikovsky’s plangent second movement becomes a ‘Death and the Maiden’ triad. Sarah Van Patten is the doomed girl, curling lovingly into Tiit Helimets’s arms and swooning into deep backbends. Vito Mazzeo enters to claim her, stern and sinister, as the music surges. Helimets does his best to look bereft as she is taken from him, Mazzeo’s hand over her eyes, recalling the same gesture in Balanchine’s Serenade.

Maria Kochetkova, with Gennadi Nedvigin, leads the Russian folk-dance-themed final section, dressed in shades of brown. Proud and seductive, Kochetkova has a vivid presence that commands the stage. Nedvigin comes out of her shadow to lead a lively band of five men. Joined by their partners, they reprise the courtiers’ dance of the opening movement, uniting the triptych of mini-ballets.

Christopher Wheeldon’s Ghosts (2010) takes the company beyond Tomasson’s enjoyable but predictable realm into a disquieting afterlife. His 18 dancers are a community of spectral souls who cluster together in the moonlight – as balletic spirits do. The atmospheric score was composed for Wheeldon’s piece by C.F. Kip Winger, a versatile musician with his own rock band. Slithering strings with a dying fall galvanise ghostly bodies into humped shapes progressing across the stage. Impelled upright, they spin and leap, agile and awkward, then huddle in distress, sighing audibly.

The women wear long silver-grey dresses with diaphanous skirts that are matched by the men’s semi-transparent shirts. Sleek hairstyles give these lost souls a period look, revenants from the past. A Giselle-like woman, Yuan Yuan Tan, is lovingly partnered by Damian Smith in a gorgeous melancholy pas de deux to plaintive piano and strings. As she is lifted across his body from backbends into plunging arabesques penchées, she flourishes her arms and wrists like whisps of vapour. Motifs are repeated to be savoured again, culminating in Tan’s flexed-foot assisted walk in Smith’s hands. She’s too precious to touch the ground.

Sylviane Sylve, red hair startling in the pallid moonlight, is attended by two men, Tiit Helimets and Shane Wuerthner. She’s a troubled spirit, darting in swift changes of direction before being swept away by her partners. The corps assemble in disciplined formations (as Wilis do), celebrating a rite. They fall prone as the curtain descends, the spell cast by Wheeldon and Winger over until they rise again another night. A half-hour piece, with echoes of so many other ballets, it passes as quickly as a dream.

Ashley Page’s Guide to Strange Places ends the programme in urban angst, to John Adams’s music of the same name. Created for SFB’s dancers earlier this year, the ballet’s style is familiar to ballet-goers who remember Page’s Fearful Symmetries (1995), also to a throbbing Adams score. Though there’s pointe work and pirouettes, the choreography isn’t bound by classical ballet principles, as Wheeldon’s is. Aggressive battements, flying jetés and flailing arms don’t  spring from a secure centre; lines are jagged, canon effects splintered. The driving force in this Guide is a series of varied pas de deux for the company’s principal dancers, costumed by Jon Morrell in glowing shades of amethyst, ruby, emerald and cobalt blue.

The first couples appear before a painted backdrop of a bleak highway leading to darkness. The scrim lifts to reveal a satellite map of grid shapes and rounded contours: recognisable to Californians, perhaps, but strange enough to be mysterious. Vanessa Zahorian is tantalisingly sensual with Jaime Garcia Castilla, both in dark green; Maria Kochetkova, in red, stays self-possessed with Gennadi Nedvigin as her eager suitor; the tricky relationship between Sarah Van Patten and Carlos Quenedit, paired in blue, has him in thrall to her push-me-pull-you tactics.

The busy, busy colour-coded corps halt for group poses when the strident music suddenly pauses. All four couples (Frances Chung and Pascal Molat in purple come and go between the others’ duets) assemble for the finale. Whether they’ve reached their destination remains ambiguous – as always with Page. It’s been a roller-coaster ride without a conclusion. 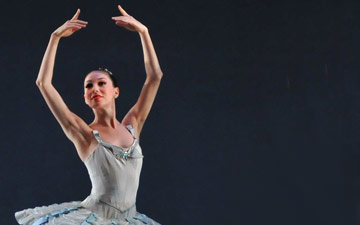 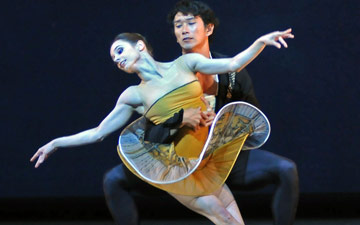 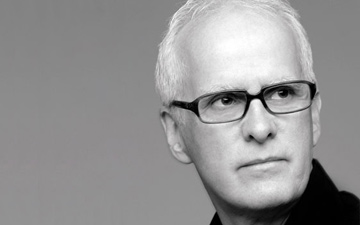