Tickets for Birmingham Hippodrome: www.birminghamhippodrome.com or 0844 338 5000

Celebrating the UK premiere performances of Aladdin, Birmingham Royal Ballet brings the tale of love, trickery and triumph to the Birmingham Hippodrome stage from Friday 15 February to Saturday 23 February 2013. Created for the National Ballet of Japan in 2008, Aladdin boasts choreography by BRB Director David Bintley, the creator of the Company’s award-winning Cinderella and music by Carl Davis, composer of the Company’s Cyrano and numerous well-known television scores including Pride and Prejudice, Cranford, The World at Warand Up Pompeii.

This production boasts a stellar creative team. Choreography is by David Bintley and adds another full-length ballet to Bintley’s incredible career and history of dance making. Full length ballets choreographed by Bintley, the award-winning Director of BRB, include Hobson’s Choice, Edward II, Far from the Madding Crowd, Cinderella and The Prince of the Pagodas which will receive its UK premiere at Birmingham Hippodrome as part of the Britten Centenary Celebrations in February 2014.

Music for Aladdin is by the celebrated composer Carl Davis and was specially-commissioned for the world premiere in Tokyo in 2008. Davis has written numerous ballets, TV and film scores including The French Lieutenant’s Woman in 1981, for which he won the BAFTA Award for Best Film Music.

Costumes are by Sue Blane. Blane studied costume design at Wolverhampton College of Art and Central School of Art and Design. She is best known for her costume designs for the iconic The Rocky Horror Show and The Rocky Horror Picture Show by Richard O’Brien. Blane was nominated for a 1997 Laurence Olivier Award for Outstanding Achievement in Dance for her design of English National Ballet’s Alice in Wonderland and a BAFTA nomination for Peter Greenaway’s The Draughtsman’s Contract.

Lighting is by Mark Jonathan who has previously created designs for BRB productions of Cyrano, Beauty and the Beast, Far from the Madding Crowd, Sylvia, The Protecting Veil, Giselle and The Seasons.

The ballet begins with Aladdin’s run-in with Palace guards that leads the young tearaway into a whirlwind of adventure and romance, involving unbelievable riches, love at first sight, treachery, and of course a magic lamp. Duped into helping an evil Maghrib, Aladdin finds himself trapped in a cave for three days and nights, with no light and nothing to eat. But it is only when he attempts to light the old lamp he’s found, that his real adventure begins!

Birmingham Royal Ballet continues to encourage families to attend its performances and is delighted to offer family-friendly show times during the Aladdin Birmingham Hippodrome run. The schedule includes a 1pm performance on Sunday 17 February and a 6.30pm performance on Friday 22 February.

Aladdin is a co-production with Houston Ballet Foundation, establishing further links between Birmingham Royal Ballet and the international dance arena. Aladdin is supported (2013) by The John Ellerman Foundation, the estate of Margery Bremner and the estate of Pamela Green. 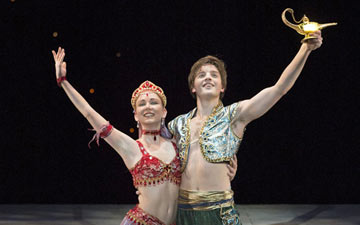 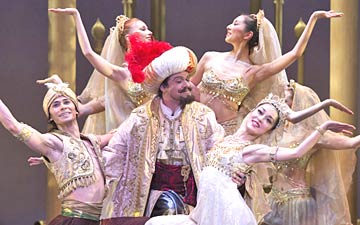 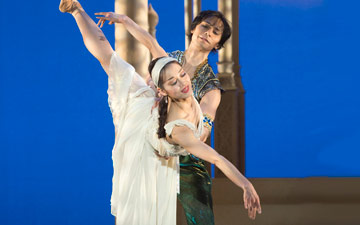