After nearly four years of absence San Francisco Ballet was back in Washington D.C. in November. During its week-long engagement at the Kennedy Center Opera House the company presented two programs: a quadruple bill of contemporary ballets and Helgi Tomasson’s production of Prokofiev’s Romeo and Juliet.

The mixed bill proved once again that San Francisco Ballet is a dedicated promoter of new work – three out of four dances on the program were created last year. The well-balanced program made for an ideal showcase of the company’s wealth of talent. On opening night, there was a remarkable level of excellence in all ranks. From the principals to the corps de ballet, the company’s dancing was superlative – refined in technique, unified in style, dazzling in speed, and expressive in phrasing.

The evening opened with Trio – a triptych of unrelated miniature ballets set to Tchaikovsky’s Souvenir de Florence. Created by the company’s artistic director and principal choreographer Helgi Tomasson, this abstract work offered an inspiring exploration of the enduring romanticism of Tchaikovsky. It proved to be the program’s strongest, most effective piece, rich in visual imagery and emotion – a handsome showpiece for the company’s dancers.

In the ballet’s first part, Vanessa Zahorian and Vitor Luiz seized the vigor and élan of the music in their effortless stride through time and space amidst the five couples of the corps de ballet, all dressed in attractive formal attire in shades of burgundy. Delivering each step with equal elegance and aplomb, the glamorous-looking Zahorian was virtuosity personified whether she was whirling through quicksilver pirouettes or soaring in breathtaking leaps.

The middle Adagio brought a change of mood and pace to the ballet. It began as a lyrical pas de duex danced by Sarah Van Patten and Tiit Helimets. The supple and graceful Van Patten looked lovely, yet vulnerable, as she melted into her partner’s arms, her movements delicately nuanced and fully phrased. Their intimate dialog, however, was interrupted by a lone wanderer (Vito Mazzeo) and the romantic twosome eventually expanded into a cryptic, agonized trio. When the stranger (a death figure?) finally lured the girl away from her loved one, she didn’t resist. With quiet resignation, she walked away with him into the abyss as if accepting her destiny.

The aura of joy and excitement was restored as Frances Chung and Davit Karapetyan led the ensemble of ten dancers in the vivacious finale, in which the choreography and the music paid homage to the exuberant folk dances of Russia.

The program’s second piece, RAkU, offered a different take on the tragic love triangle, framing the theme of doomed love and loss in the style of Noh Theater. Created by the company’s choreographer-in-residence, Yuri Possokhov, it is a story-driven ballet – an oriental melodrama set to a percussive score by Shinji Eshima.

The ballet’s narrative was inspired by real life events which took place inKyotoin 1950, when a Zen monk burned one of the most gorgeous temples inJapan– Kinkaku-ji – to the ground. But the ballet’s story wasn’t about the ashes of the sacred temple; it revolved instead around three main characters: a princess, her husband and a monk. And it was the ashes of her late husband who perished in combat that the princess mourned in the end. Having been brutally violated by the monk, she died of grief and shame.

During the course of this 35-minute piece, one scene gave way to another in quick succession: the princess bidding farewell to her husband; the samurai wielding their swords in a military-like exercise; the princes viciously attacked by the crazed monk; the princess scattering over herself the ashes of her dead husband. But for all the drama, which boasted enough pathos for a feature movie, it all felt heavy and far-fetched. When expressing human emotions through movement, Possokhov resorted to extremes rather than subtlety. As a result, the ballet felt unsettling rather than moving.

The sensational Yuan Yuan Tan embraced the role of the tormented heroine with all her heart. Her dramatically intense performance was RAkU’s biggest asset.

As a little pick-me-upper, next on the bill was a 5-minute ballet titled Voices of Spring by Frederic Ashton – a fleeting pas de deux created for a 1977 staging of the Johann Strauss opera “Die Fledermaus.” It was an odd choice for a program of newly minted dances, yet this whimsical duet brought a sunny atmosphere back to the theater and gave the audience a chance to admire the effervescent Maria Kochetkova floating in the arms of her partner, Joan Boada. The rose petals covered the stage and the sounds of the indestructible Frühlingsstimmen Walzer filled the theater.Vienna! Strauss! What’s not to like?

There is something about Michael Torke’s Ash (1989) – a short musical piece in the style of minimalism – that over the years has attracted various choreographers and thus inspired nearly 13 dances, most notably Peter Martins’ ballet of the same title created for the New York City Ballet in 1991. The composer himself thinks that it is the music’s rhythmic profile or “a gripping momentum,” that intrinsically appeals to the dance-makers. He has a point – Ash unfolds in a wave-like fashion: the melodic tension steadily building up and coming down, building up again and gradually coming back. The score, with its punctuated rhythm and driving pulse, is uplifting and innately danceable.

In Number Nine, the culminating dance of the program, Christopher Wheeldon channeled the intoxicating energy of Ash to a spectacular effect. Dressed in sporty, brightly-colored costumes, the dancers – four principal couples and an ensemble of eight supporting couples – looked like awe-inspiring athletes. The choreographer aptly matched the music’s power with steps that were invigorating and fresh. The ballet unfolded in one continuous, exhilarating flow of movement – an inspired mix of athleticism and visual excitement. The dancers’ groupings and patterns were constantly changing and one could only marvel at the imaginative geometry of Wheeldon’s choreographic formations. The technical brilliance of the dancers was evident at all levels, but you couldn’t take your eyes off the leads. Among them, Sofiane Sylve, Sarah Van Patten, Gennadi Nedvigin and Carlos Quenedit were particularly impressive. 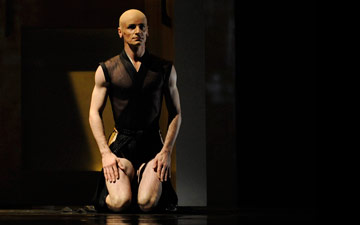 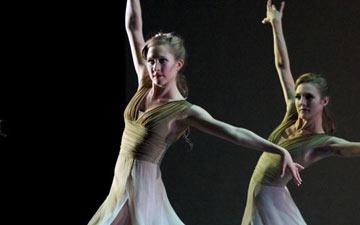