The Contortions of Contemporary Ballet, Put to Use – Arthur Pita’s Metamorphosis

So much contemporary ballet – the British choreographer Wayne McGregor comes to mind – consists of finding new and exciting ways to twist and bend dancers’ bodies, as if the point of dance were to test the limits of the human form. How wide can the legs be split open, how far can the back be arched, how violently can an arm be twisted before it pops out of its socket? More than once, I’ve felt uncomfortable watching a contortion that seemed to go too far beyond the natural range of human motion. Beautiful? Certainly not. Intriguing, perhaps.

One of the more intriguing aspects of The Metamorphosis, the tour-de-force dance-theatre piece created by the choreographer Arthur Pita for the Royal Ballet dancer Edward Watson – now playing at the Joyce – is that it places these physical distortions in a context, puts them to use in the service of a story. As most of us remember from high school, the protagonist of Kafka’s novella, Gregor Samsa, wakes up one morning to find himself transformed into a repulsive bug who has trouble rolling over and whose body oozes a sticky goo. Pita’s extreme choreography for Watson – legs twisted over arms, knees bent to extreme angles, chest arched, weird finger-like toes twitching revoltingly – effectively turns him into a kind of fascinating monster. This is doubly true once Watson’s lean, serpentine frame is slathered in a black, slimy substance (made up mostly of molasses, I’m told). For most of the ninety minutes of the show, he ceases to really appear human – his commitment to the part, and to its extreme physical requirements, is quite astonishing.

But does Pita’s Metamorphosis, originally commissioned by the Royal Opera House for its smaller Linbury Studio Theatre, work as a whole? Not really. The beginning is promising and the cast is strong, especially young Corey Annand as Gregor’s younger sister Grete. (Several cast members play multiple roles.) The set is remarkably effective in its simplicity. Two white rooms: the neat, mid-century kitchen – in which Gregor’s family congregates for meals and various activities – and Gregor’s room, an increasingly disheveled and gooey hell. The mother cooks the family’s meals and does Soviet-style stretches while watching TV. The father reads the paper. Grete scampers about, dressed like a young pioneer, and shows off her latest ballet moves (in the book, she plays the violin). Then the unthinkable happens and Gregor wakes up as a weird mess of elbows, knees, and prehensile toes.

As in the book, the most affecting (and complicated) relation in Pita’s work is that between brother and sister. (I was also taken with the matter-of fact housekeeper, played by the convincingly down-to-earth Bettina Carpi.) At first, young Grete tries to help him; she purées the family’s trash for Gregor’s dinner, tries to straighten his hopelessly twisted limbs. In what is probably the most touching moment in the show, she plays a bossa nova record on the hi-fi and leaves the door open so that they can listen to it together. When she falls asleep, her body echoes some of Gregor’s twisted shapes, a nice metaphor for her empathy.

If the piece ended here, it would be a success, but there’s still a long way to go. One of the problems with turning Kafka into a wordless piece of dance-theatre is that it is practically impossible to physicalize the complexities of Gregor Samsa’s state of mind, which is, of course, the very meat of the story. Watson can only contort his body and show torment in so many ways. After a while it becomes necessary to pad the story with extraneous horrors. Men in black slimy bodysuits invade his bedroom and coat him with an extra layer of goo as the music – an intriguing score of violin glissandi, percussion and vocalizations by Frank Moon, half pre-recorded, half live – grows into a deafening crescendo. Grete does dance exercises in the kitchen, now en pointe, with an emphasis on the unnatural, splayed extremes of ballet technique. (The idea seems to be that these poses reveal something slightly monstrous about her nature, and maybe also about the nature of ballet.) Three bearded men – lodgers the family has been forced to take in now that Gregor is no longer bringing home the bacon – do a line dance to Klezmer music. Most of these activities are only mildly interesting. Meanwhile, Watson, in the room on the left, continues to bend himself into knots. A good half of the piece feels like more of the same. By the time Gregor dies our initial horror at his state has begun to fade. In a sense, it’s a version of the same problem that haunts other pieces that rely excessively on extreme technique. Our eye eventually takes the contortions in stride. Gradually they begin to look less monstrous. In the end, the heart goes numb. 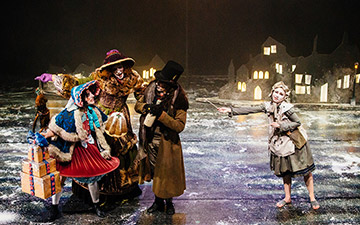