After a week of mixed bills (including a large number of new works), San Francisco Ballet completed its New York run with several performances of its new evening-length Cinderella by Christopher Wheeldon, a co-production with the Dutch National Ballet. The staging is lavish, with beautiful and often imaginative designs by Julian Crouch augmented by magical puppetry effects by Basil Twist. Throughout, the San Franciscans danced with full-bodied attack, freshness, and an appealing sense of esprit de corps. They’re virtuosic without being showy. Wheeldon’s choreography in Cinderella seems to acknowledge this, creating multiple opportunities for the dancers to shine in small solos, as well as in the larger ensemble numbers. In fact, some of the most pleasing choreography is given to the corps de ballet in the ballroom scene. Lines cross, dancers are lifted on the diagonal, arms and hands breathe.

And yet, the ballet only intermittently takes wing. It is gorgeous to look at, tastefully paced, and clearly laid out from beginning to end, but emotionally remote. The funny parts aren’t funny enough, and Prokofiev’s soaring, romantic passages fail to blossom through the steps. The two most affecting moments are not even part of the original story: a new prologue added by Wheeldon and his collaborator, the playwright Craig Lucas, in which we see a scene from Cinderella’s happy childhood before her mother’s death; and a courtship scene between the prince’s friend (Benjamin) and Cinderella’s stepsister (Clementine). The first gives us an insight into the love that Cinderella has lost and that has made her who she is. The second, danced by Hansuke Yamamoto and Clara Blanco (both excellent), lends a touching humanity to otherwise paper-thin characters.

Prokofiev’s score is a tough nut to crack. Like his earlier Romeo and Juliet, it contains descriptive set pieces and soaring melodies. But, with the exception of the fantastically off-kilter waltzes in the ballroom scene, the music lacks that ballet’s cinematic sweep and fluid transitions. It’s episodic, and the repeated motifs spin their wheels instead of deepening the plot. The comic bits come across as forced. Wheeldon’s ideas keep getting stuck in the spokes of the music. But more importantly, he seems unwilling to go all the way in his characterizations. The scenes for Cinderella’s bumbling stepsisters have little verve, and as a result aren’t very funny. The passages for the wood sprites who take part in the preparations for Cinderella’s coming-out are extremely pretty – Wheeldon is a great craftsman and finds subtle ways to color the steps – but fail to illustrate the individual qualities that each fairy is meant to represent. (Wheeldon has dispensed with the Fairy Godmother.) Only the colors of the costumes allow us to distinguish one group of wood-nymphs from the next. Particular praise goes to Francisco Mungamba and Lonnie Weeks as the sprites of generosity and mystery, for their crisp, buoyant jumps and silent, perfectly-placed landings.

The three pas de deux for Cinderella and Prince Guillaume (Vanessa Zahorian and Davit Karapetyan) have a similarly abstract feel; they don’t quite tap into the emotional currents in the music. Nothing in Wheeldon’s choreography helps us to understand the sudden attraction between them, or the surprise they must feel at finding each other. The first duet, which is continually interrupted by the corps, is dominated by elegant, small lifts. The second, set to one of Prokofiev’s great swooning melodies, has Cinderella cartwheeling onto the prince’s shoulder, flipped over his back, held upside-down, lowered to the floor. But the emotion gets lost in the mechanics. (Tellingly, the chemistry between Cinderella and her Prince is less strong than that between Guillaume and his sidekick Benjamin.) Zahorian and Karapetyan are lovely on their own (though Zahorian was slightly cautious), but unaffecting when they’re together.

The great coups de théâtre in the production are provided by the puppeteer Basil Twist. A master of illusion, his greatest contribution is a tree that grows out of Cinderella’s mother’s grave, whose branches pulse with life and vibrate with color. It becomes a powerful metaphor of a mother’s love, embracing and protecting her daughter from beyond the grave. Under its canopy Cinderella is transformed into a glamorous beauty before the ball; in its shade she is married. Twist, who has a magic touch for materials, also builds a chariot, apparently out of thin air. The billowing train of Cinderella’s dress becomes the body of the carriage, and spinning mushrooms become its wheels; masked figures pull it forward. And suddenly there it is. Pure magic.

There are other illusions as well. Four masked figures hover near Cinderella, becoming almost extensions of her body. They help her to swoop and glide weightlessly through the air, as if she were only half human. It’s a nice effect, and merges well with Wheeldon’s sinuous, silky style. No-one handles port-de bras with more sophistication than he; the dancers’ arms breathe, their hands and fingers are sensitive and alive. The texture of the movement is deeply lovely, but Wheeldon seems less assured when it comes to plumbing the depths of the story. His Cinderella is handsome and well-crafted, but it doesn’t elicit much empathy for its heroine, or bubble over with elation when she finally finds happiness. And isn’t that what one really wants, in the end? 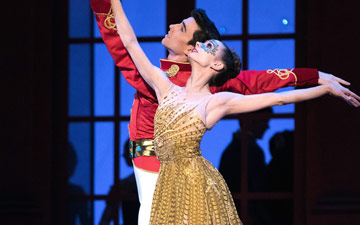