The gulf between commercial dance – the kind one sees in TV ads, music videos, and on shows like So You Think You Can Dance – and theatrical dance is disconcerting. In pop culture, dance is clearly having a moment. It’s everywhere. The technical level of dancers is universally high; as with sport, training has become a science that produces a seemingly inexhaustible supply of professionals. Which explains why the field has become so inhumanly competitive. Dance, when placed in the context of a game show or a car commercial, has a clear purpose: look good, grab attention, sell the product, win the competition. As recent Academy Award ceremonies have proved, a dance number or two can really jazz up an evening.

But dance for its own sake is a different matter; its wordless, physical language is both its most powerful asset and the greatest hurdle to comprehension. Music doesn’t need dance. So the question inevitably arises – what, exactly, is the dance trying to say? Some choreography helps us hear the music more clearly (Balanchine, Mark Morris). Some is so thrillingly complex that we forget about the music altogether (Merce Cunningham). Some, like the work of Lucinda Childs or Anne Teresa De Keersmaeker, has an incantatory quality born of precision and repetition. Or, in the case of someone like Trisha Brown, dance can reveal the mechanics of movement itself.

These questions come to mind as one watches Susan Marshall’s new evening-length dance, Play/Pause, which continues its run at BAM’s new black-box theatre (the Fishman Space) through Nov. 23. The piece is seventy-five minutes long – the standard length for most single-concept dance works in New York these days. Long enough for an idea to be developed, but not so long that one starts to measure the number of seats to the exits with desperation if the thing doesn’t work. In Play/Pause, Marshall, who in the past has created works filled with surprising metaphors for life’s complexities, explores the gestures and attitudes of rock-and-roll. Her piece is like a theme-and-variations built on the hip-swaying, arm-swinging, foot-swiveling moves we’ve seen rock stars and their back-up dancers perform a million times. (Marshall has put together some of them for this video, a companion-piece to the show.)

The music, by the post-minimalist composer, David Lang, is a kind of ersatz rock-and-roll, with twanging electric guitars and a strong beat. Occasionally, a drawling vocal line is laid on top. The musicians, Taylor Levine, Michael McCurdy and Gyan Riley – members of a group called Dither and Mantra Percussion – sit in a space above the stage, from which they survey the dancers, taking and giving cues. Like Marshall’s choreography, Lang’s music feels like a commentary on rock attitude. The evening is knowing and smart, well-paced, intercut with black-outs. As the title suggests, it feels as if someone were intermittently hitting “play” or “pause.” Marshall’s six attractive dancers pivot on one bent leg, swing their arms with cool precision, tap their fists against their chest (as if to say “I feel you, man”) and snap their fingers in a controlled, neat version of “rocking out”. All the while, they stare out at us with deadpan – or, in the case of the slightly older Peter Simpson, slightly bemused – expressions, a variation on the rock-and-roll moue. Simpson, especially, oozes a kind of tired rockstar irony as he mumbles disconnected phrases into the mike: “this is for you,” “it’s not a perfect plan,” “what the hell am I doing here?” In one long sequence, he stands behind a square pane of glass, breathing heavily, fogging up the glass. There is some audience participation, a ritualized re-enactment of the rock concert call-and-response routine.

Marshall hints at something deeper, a hint of distress, though its cause never becomes clear. Repeatedly – one might say compulsively – the petite, fierce-looking Ching-I Chang rubs a microphone against strips of masking tape placed on a wall by another dancer. The rubbing creates a loud scraping sound. Another dancer, usually one of the men, removes the strips one by one, or stops her hand with his own. Dancers fall, their bodies bobbing limply against another dancer’s calf or thigh. A brief tango-like duet, all swinging bodies and intercutting legs, suggests a human connection, quickly suspended by a voice calling out “stop” – yet another interruption. Lights, manipulated by the dancers, create pools of intimacy and rock-star silhouettes.

But no single image resonates, nothing accumulates. The piece stays on the surface, encumbered by rock-and-roll’s solemnity, but lacking its raw, adolescent energy. One can’t help thinking that not much is at stake. And because of this, Play/Pause ends up feeling like an exercise, a stylish meditation on style, a Gap ad with nothing to sell. 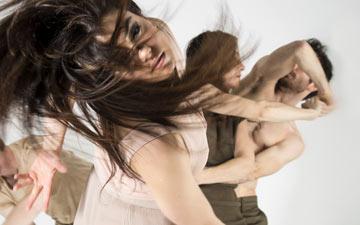 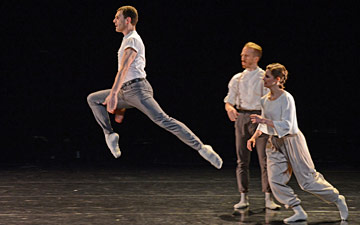 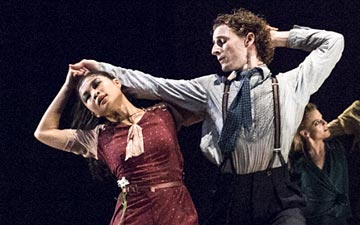