It seemed a brave move for a modern company to bring to the birthplace of Russian ballet not only cut-down Tchaikovsky scores but a pick-and-mix of moments from three of Petipa’s beloved masterpieces. But bravery is obviously part of the make-up of Malandain Ballet. Hailing from Biarritz, it’s one of only a handful of ballet companies that still exists today in France, or that hasn’t been taken over by modern dance. The company, formed sixteen years ago by Thierry Malandain, produces one premiere a year and gives 100 performance of that production. The work chosen for Dance Open was created in 2009 and is called Magifique, a combination of the words magique and magnifique and harps back to Thierry’s own childhood fantasies. So audience expectancy was for something mystical, and to set the scene several panels of mirrors were used. Standing at the back of the stage, the dancers used them to pop behind, sneak in and out of, and sometimes to lie with heads out one end and someone else’s legs sticking out the other. The mirrors were also wheeled around, laid flat or tilted – the glass catching the spotlights and gleaming brightly. The only other props were three ballet barres which were cleverly used and slickly moved for different moods – as a gym bar to climb over and tumble from, to stand on like a tightrope and, when placed upright, as a pseudo lamp-post to clamber up.

The dancers wore skin-coloured patterned lacy body shorts and there were moments in the bright lights when they looked naked. The only other costumes were those of the mirror turners. These wore black spiky outfits and caps and they cavorted malevolently like Carabosse’s entourage as they pushed and pulled.

The ballet was a symbolic dream-like take on Petipa’s most popular works – Sleeping Beauty, Swan Lake and The Nutcracker (though, unlike Peter Schaufuss’s trilogy, they were all completely unconnected.) The transition from one ballet to another – for there were no intervals in this 80-minute non-stop presentation – were the sounds of crackly, crowded wave-lengths through which could be heard dissonant snippets of the ballet’s music.

First came Sleeping Beauty – well, brief moments from it, such as the Rose Adagio, in which a ‘ballerina’ with flexed feet, was manhandled roughly by four men, who certainly had no romantic intents. Then there was the Puss in Boots music from the final act, where a sashaying man and a girl swung on barres and jumped a lot. The Garland Waltz made great use of the mirrors, dancing in and around them, or gliding them across the stage. There were two male dancers who played principal parts – presumable the child figure and the hero of each story – though it was a bit of a mystery (as also were the names of the dancers since the 20-member company was listed alphabetically in the programme. My own deduction from their website leads me to believe that the small dancer was Jacob Hernandes Martin, while the taller dancer could have been Frederik Deberdt. But I could easily be wrong.) Anyway, the small one, whom I thought was the prince figure, lost out all the time to the tall one, who seemed at one point to pop up, during the Panorama music, as possibly being the Lilac Fairy too! (“Don’t try to analyse’, recommended a wise colleague to me. ”Accept it as a fantastical dream. It’s all a magical haze – there is no story.”) And there was no recognizable ending either.

After more distorted music came Swan Lake, everyone still looking the same. The girls made effective swan-like actions with their arms and the Odette figure leaped into upturned mirrors – now a lake – and showed some graceful moves in the ‘water’, while Deberdt (?) pseudo-dived into the lake after her.

Malandain has injected many moments of humour into this work, and the funniest scene of the evening was the quartet of little swans. This was executed by four large men, who lay behind the ‘lake’, throwing up feet, legs, bottoms and hands at different moments during a speedy, slick all-too-short interpretation of the dance and had the audience laughing out loud. The three ‘big’ swans were uniformly good and danced attractively with sensitive actions, leaping with flexed feet and puffed chests. As in Beauty, Jacob (?) did more walking backwards on his hands, as well as several cartwheels. A couple danced the Czardas with aplomb and added salsa style, and the Mazurka saw elements of Scottish reel partnering.

More scratchy noise announced the final change of ballets. This time it was The Nutcracker with backwards marching by the mass of company members to the children’s party dance music, and ending with the girls strutting forward, presenting themselves one by one as in an American beauty pageant.

Deberdt now took centre stage and, though physically, more solid than other dancers, showed himself a nifty and light-footed jumper and leaper. For those in the audience who had succumbed to a gentle nodding off, they were roused by a sudden burst of ‘singing’ from the dancers, and the finale of Waltz of the Flowers had elements of Busby Berkley’s kaleidoscopic opening and shutting of legs and arms in creative patterns.

As for the connection of scenarios and events, there was none, nor any comprehensive reason for the choice of extracts. However, the work held the attention well, the dancers were strongly unified and disciplined and they showed musicality and good technique. Everyone danced with dedication, and the promised ‘magic’ was there. It was all done with mirrors!

Nothing could have been more different to this than the five selections on view for the Hans van Manen tribute the next night, which was in sharp contrast to the Malandian Ballet. Both companies are very musical – while the French company hits the beats – every beat – Dutch National Ballet draws out the music in clear definitive tones, relishing the opportunity to show the subtleties of the choreography with clarity of movement. Nothing can be hidden here and, while the pace is often somewhat leisurely, the images given are precise, often beautiful, and technically brilliant as executed by the fine team of DNB dancers. However, a whole evening of just one choreographer’s work showed many repetitive moments – but who wouldn’t after creating over120 ballets in a lifetime? Van Manen is not a storyteller but makes his works precise and usually short. He is guided totally by the music and uses the body as an instrument – especially noticeable in the first piece, a ballet, which had had its premiere only a few days before being seen at Dance Open.

In Dances with Harp, which opened the programme, the talented 23-year-old harpist Remy van Kesteren took the spotlight. Rippling his fingers nimbly over the strings, he offered sounds and tempos both unusual and beautiful. The dancers became his instrument, their bodies, especially legs, flying over invisible strings, splicing the air in higher notes, or falling into deep 2nd position plies in lower notes. There was a vast selection of tempos from composer Carlos Micháns, some jazzy, some pizzicate and others lyrical glissandos. The six dancers – Igone de Jongh, Artur Shesterikov, Anna Tsygankova, Josef Varga, Jurita Dronina and Isaac Hernandez – moved elegantly, swiftly and with great control following the music’s demands.

A favourite next – Trois Gnossiennes – which was also nearly upstaged by a musical instrument, this time a grand piano that was swished around the stage at moments by three bare-chested men as the pianist, Olga Khoziainova, played on. The dancers here were the lovely Larissa Lezhnina, who received a very warm welcome from the audience, and Casey Herd.

Solo is in fact three solos with three boys, and here, Rink Sliphorst, Edo Wijnen and Young Gyu Choi joyously danced their own pieces, running in and out. This was followed by Variations for Two Couples, which, while basically abstract, showed each duo – Tsygankova with Matthew Golding and de Jongh with Varga – uncover relationship problems. There was no emotional connection with partners – Tsygankova pawed the ground like a huffy horse one moment and had a face off with Golding the next. Love was not on the agenda.

Nor was it in the next piece, seen in Russia for the first time. Corps, created in 1985, is a macho piece with a recurring homophobic theme. A gang of men in most unflattering shiny black, slit-fronted bibbed and highly cut shorts, stamp, huddle and intimidate any couple who dance together. There are three girls who come in at different times: the first in white, the second, in grey and the third in black, and though the pas de deux were individually beautifully delivered, the piece also conjured up the feeling of animosity from the other men gathering from the background, ready to claim their own back into the ranks of male solidarity. However, as with van Manen’s works, one must cast off any thoughts of story-telling and enjoy the striking bodies of the dancers as they move in unison with the music. 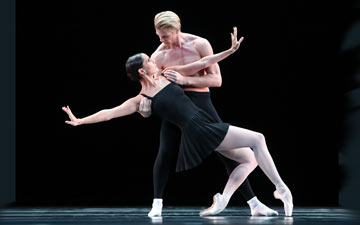 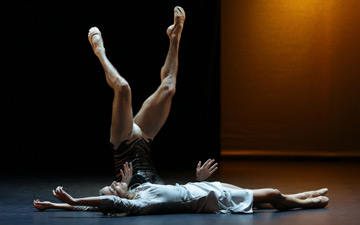 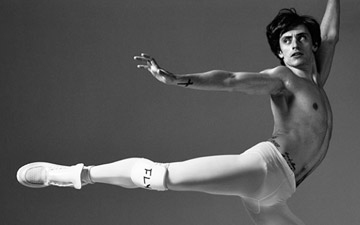