Hans van Manen turned 85 this summer and Dutch National Ballet (DNB) are celebrating with a diverse bill of his works, an event so significant that even the King turned out. Van Manen started dancing in 1952, created his first ballet in 1957 and, 60 years and over 120 works later, he is still active as resident choreographer of Dutch National Ballet, who will be presenting a new work of his in the spring. Ode to the Master is the current bill’s title and it comes with a delicious 15-second silent video of the man himself – confident, cool, sharp, enigmatic and a little bit scary, perhaps. And you see all these qualities in his dances.

But when I think of Hans van Manen I think more “Godfather” than “Master”. Over the last half-century he has dominated dance in Holland but his influence goes well beyond with most of the world’s major ballet companies presenting works by him. And what makes him more astounding is that he is not a ballet choreographer as many understand it – he choreographs dance and ran and/or created works for Nederlands Dans Theater (NDT) between 1961 and 2003. In a ballet world, which so often looks back, his entire 85 years is a testament to the modern and a net cast wide.

The Ode to the Master (Ode aan de Meester) bill consists of four works made between 1977 and 1992 – a particularly fertile time. For the opening night a fifth work, from 2014, was tucked in and interesting it was for being both a recent piece and for being danced by a quartet from Ballett am Rhein who commissioned it. But the evening opened with DNB dancers in 1992’s On the Move, originally created for NDT, and, at 24 minutes, the longest work on the bill. Brevity, thankfully, is a van Manen watchword and he’s never one to outstay his welcome. To a Prokofiev violin concerto, this has ballet formality and duets but without the pointe shoes and in glorious shiny all-in-one costumes, with punctuated slit sides, by Keso Dekker (a regular collaborator). Joop Caboort’s strong down and side-lighting accentuates the thrusting, pushed, lines and shooting legs. The music ranges widely from the quiet of plucked violin to the more sweeping as dancers race on and off. It was a first chance to remind oneself of the joy of his duets with their mix of the formal overlaid by a frisson of excitement and his funny side; as we inspect with interest a cool ‘n hot duet so do the corps of ten dancers. What it also shows is how flexible is van Manen’s response to music, often going with the broad emotional flow of the score and then, just occasionally, responding directly to a few bars with a fluttering flight of fancy, exactly on the beat. It’s so beguiling.

The corps are the star in Symphonieen der Nederlanden (Symphonies of the Netherlands) and it must be an exhilarating nightmare of counting for the 24 of them in constantly moving lines, wheels, circles and clever huddles. The score, by Louis Andriessen, is for 2 brass orchestras and, while exciting, subtlety is not its middle name. For 13 minutes van Manen plays rapid riffs on marching and movement in canon and both you and the dancers are breathless by the end; and again one is pleasantly surprised by Kesso Dekker’s stunning costume designs. 5 Tango’s (5 Tangos is the alternative spelling of some companies), which actually closed out the night, also looks a million dollars in its more traditional Jean-Paul Vroom designs. The most famous work on the bill and in the repertoire of many other companies including the Mariinsky, it’s a piece that does not really speak to me on an emotional level. To Astor Piazzolla its rigorous, bold movement and various clever symmetries I can admire, but this is Tango music which I can’t easily separate from the staccato sharpness and sexiness of the real Argentinean dance. It pleases many but ballet’s take on something else doesn’t work so well in this case, save in one sharply engaging and sexy solo, danced with brio by Daniel Camargo, which the audience, as if waiting for release, applauded mightily.

In what was actually an exceptional night, two pieces, both new to me, particularly jumped out. Ballett am Rhein danced Alltag (Everyday life) to a selection of music including Mahler, Schubert and Bach. You didn’t need to know this was created only 3 years ago to see it was the reflective work of an older mind. Van Manen famously doesn’t do full-evening or classic narrative ballet, but here before us was drama. And this was the drama of real people – no chic costumes here. The work centres on an older man, danced by Martin Schlapfer, the 57 year old director of Ballett am Rhein, and I’m still untangling it. Armed with no information on the night it seems to represent a man looking back on life, at first alone and then with his partner (a fine and sultry Marlucia do Amaral) and then together they both look at a younger couple, doing unencumbered expressive steps – it all feels like what might have been and rather dreamy. Research later shows it to be about the creative process with Schlapfer dancing the moody choreographer and how he interacts with his ideas and the dancers in the studio. Armed with that I’d love to see it again, but regardless, what really pleased me was the movement palette and acting – deeply emotional and I gasped as Schlapfer rolled on the floor morphing between walrus and mermaid as he unlocked his thoughts and laid bare his soul. This was van Manen channelling the space of Kenneth MacMillan and I’d love to see more of it. At just 16 minutes long, for once I cursed such economy. (For pictures of Alltag see this Ballett-Journal article)

Sarcasmen (Sarcasm) is a terrific piece of clever fun and here too there is drama as a pair of of diva-ish dancers try to impress and challenge one another, at first separately and then together. Colluding with them is an onstage pianist (Robert Greuter with a Prokofiev score – both excellent) who gets rather bored and uncooperative at times, mimicking the dancers’ attitude. It’s a tough piece technically but Igone de Jongh and Martin Rademaker made light work of those aspects while delivering cartoonish facial expressions of unimpressed amusement. It’s a piece everybody can get. But for lovers of Balanchine you can’t see Sarcasmen without thinking about his black and white leotard ballets and Agon particularly. Think of all that Balanchine neo-classical seriousness overlaid by a sarcastically bickering couple and the steps subversively taken just a little over the top.

An outstanding bill in showing Hans van Manen’s work for three companies and its rich contemporary diversity – it all looks so fresh and of today. ‘He can still surprise’, it seemed to shout and I look forward to the premiere of his next work in March and the surprises in store then. 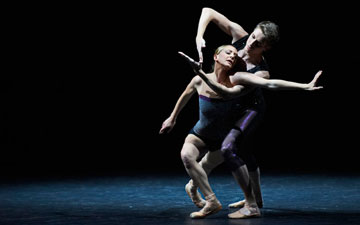