The National Symphony Orchestra is exploring new ways to reach broader audience and to get the younger generation in the door with “NEW MOVES: symphony + dance” – a new festival dedicated to music and dance. During two weeks in May, the NSO three-program event brought to the Kennedy Center Concert Hall a wide assortment of American contemporary music, plus four newly-minted dances, created specifically for the occasion.

The second program of “NEW MOVES” (May 10) offered a perfect mix of the classical and popular traditions and geared towards symphonic music composed with dance in mind.

The concert began with Selections for Orchestra from George Gershwin’s opera Porgy and Bess – a charming medley of the opera’s most memorable jazzy tunes, including the immortal Summertime; followed by Samuel Barber’sSouvenirs, Op. 28 – one of my favorite musical offerings of the program.

Originally, Barber wrote Souvenirs for piano four-hands. In 1952, Lincoln Kirstein, the co-founder of New York City Ballet, commissioned from the composer the orchestral arrangement of the piece, which later was used for a ballet of the same title with choreography by Todd Bolender. In 1998 a young member of the NYCB corps, British-born Christopher Wheeldon, set his first major choreographic attempt to the same score, conjuring an attractive and thoroughly enjoyable Soirée Musicale for a group of ballet students of the School of American Ballet. Then last year, Wheeldon – by this time a major creative force in today’s ballet world – revived and revised his choreographic début for the NYCB dancers. (The company brought his restored and stylishly-costumed Soirée Musicale to the Kennedy Center Opera House last month as part of its mixed-bill program.)

Each movement of Souvenirs (Tempo di walzer, Schottische, Pas de deux, Two-step, Hesitation-tango and Galop) is a sparkling dance with its own distinctive style and atmosphere. It was a real pleasure to experience this picturesque music – an evocation of Chopin and early Rachmaninoff – in a sweeping rendition by the NSO. Conductor Thomas Wilkins drew animated and expressive playing from the orchestra, especially during an impassioned account of Pas de deux.

The NSO’s timpanist, Jauvon Gilliam, demonstrated superb movement skills and virtuosic choreography in its own right as a soloist in Timpani Concerto No. 1. by James Oliverio.

After the intermission the audience was treated to a selection of dance compositions by Duke Ellington.

The opening piece, Giggling Rapids, is a brief passage from The River (1970) – Ellington’s debut as a ballet composer. (The ballet was commissioned by American Ballet Theatre with choreography by Alvin Ailey.) Three Faces of Duke Ellington, which followed next, featured two excerpts from another Ailey ballet, Three Black Kings.

The best came last. For its final section, Harlem, NSO musicians teamed up with the nine dancers of New Ballet Ensemble, a troupe from Memphis, in a stunning, rousing performance which brought the house down and ultimately proved the highest point of the evening.

New Ballet Ensemble is not a typical performing dance company. It’s an arts educational organization – a Creative Youth Development program – which provides professional dance training to students from all social and economic backgrounds in Memphis, Tennessee. It was founded in 2003 by its artistic director and choreographer, Memphis native Katie Smythe. The Ensemble is known in the United States as an exponent of jookin’ – an American dance rooted in improvisation and based on various elements of urban dance such as hip-hop and break dance. Charles “Lil Buck” Riley is an internationally recognized jookin’ dancer and NBE’s most famous alumnus.

When Smythe received an invitation from the Kennedy Center to create a dance for the NEW MOVES festival, she chose “Harlem Suite” for a reason: Ellington’s music as well as his artistic credo ring true with her company’s style and traditions.

In her 15-minute piece for nine dancers, Smythe took as an inspiration and a guiding point Ellington’s own description of Harlem and its cheerful and dressed-to-impress crowd of church-goers, strolling from one neighborhood to another on a bright Sunday morning: “Everybody is in a friendly mood. Greetings are polite and pleasant, and on the opposite side of the street, standing under a street lamp, is a real hip chick. She, too, is in a friendly mood. You may hear a parade go by, or a funeral, or you may recognize the passage of those who are making our Civil Rights demands.”1

Smythe’s Harlem was a riot of imagination, movement and color. The choreography blended together three seemingly unmixable styles of dance – classical ballet, jookin’ and flamenco – to mesmerizing effect. The superb cast of nine dancers set the stage ablaze with their electrifying and inspiring performance, tossing in a series of eye-catching solos and group numbers, one more impressive than the next.  A sense of engaging vitality and boundless ingenuity laced the choreography from the beginning to the end, driving the dance – and the entire program – to a powerful and memorable conclusion.

1. As quoted in “DUKE: A Life of Duke Ellington” by Terry Teachout. 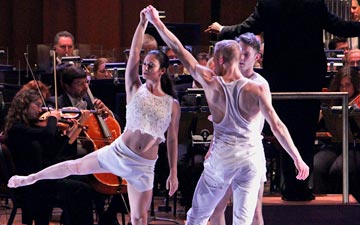 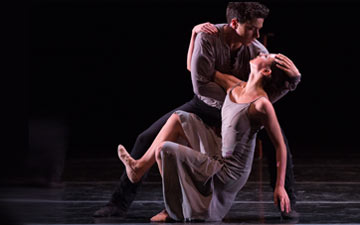