If there’s one thing you can say for Yuri Grigorovich’s 1968 ballet Spartacus, it’s that it gets its point across loud and clear. The role of Spartacus – leader of a first century BC slave uprising – isn’t just heroic, it’s practically superhuman. It’s a wonder anyone can get through all those crazed and gigantic leaps, act after grueling act; one imagines the dancer being carried off on a stretcher afterwards to receive intravenous feeding and intensive physical therapy, while being showered with accolades and fragrant rose-petals. As far as I’m concerned, Mikhail Lobukhin, who danced at the July 27 matinée, deserves a medal.

Nor can one conceive of any other company performing Spartacus with anything like the energy, fervor and sheer brawn exhibited by the Bolshoi. Again and again, the dancers devour the stage in phalanxes, whirling circles and advancing waves. The men stomp, pump their fists in the air and leap with massive force, then leap some more, chests exposed, arms outstretched. The women kick their legs ever so high, run, shimmy their hips, twirl without end. (Grigorovich has even given them a kind of wild hoochie-koochie, complete with pole dance.) And that’s just the ensemble dances. Spartacus is the ultimate balletic show of force, an accumulation of crescendi leading to a series of orgiastic climaxes: folk dances, orgies, duels, battles, and, finally, a horrifying crucifixion on a grid of interlocking spears. (I honestly feared for Mr. Lobukhin’s safety.) Even the mourning that follows is supersized. “Why? Why?!” his devoted wife, Phrygia, seems to cry out, hands reaching toward the audience, eyes raised to the heavens.

Grigorovich created his version of Spartacus – a story that had received two previous treatments – in 1968, as part of the celebrations marking the fiftieth anniversary of the October Revolution. Its theme, driven home with great insistence and clarity of purpose, is the glorification of an unsuccessful but noble revolt orchestrated by an oppressed group of gladiators against a despotic, depraved regime. There is much goose-stepping and Fascist saluting on the part of the Romans, in case there should be any doubt about the message.

The Romans are a savage lot; Aegina, mistress to Crassus, leader of the Roman army, is particularly nasty. (At this performance she was danced with a gleeful mix of vampishness and hauteur by Svetlana Zakharova. She displayed herself to Crassus and, especially, to the audience, as the ultimate glamor object, vulgar but expensive.) Aegina shows off her legs incessantly, running her hand down a thigh, holding one leg up to her head as she turns, or, more obviously, raising her crotch like a weapon while she lies provocatively on the floor. Not much is left to the imagination. From the waist up, though, she’s a lady; her chin is held high and one hand curves artfully before her face as if a cigarette holder dangled perennially between her elegantly tapered fingers. Understandably, Crassus can’t get enough of her.

The ballet places great emphasis on legs and hands; the costumes, for men and women, are cut just above the thighs, the better to show off the shapely and powerful haunches of the dancers. These legs are the force behind the Bolshoi’s famous space-devouring leaps; there’s nothing quite like seeing forty dancers hurl themselves about the stage at once to Khachaturyan’s bombastic, pounding, percussion-and-brass-heavy score. And the pas de deux are no less strenuous. Aegina wraps herself around Crassus like sticky taffy, contorting herself into a donut-like ring, like the Siren in Balanchine’s Prodigal Son (could it be a quotation?).

But the duet for Spartacus and his loving Phrygia (a beautiful but bland Ana Nikulina) takes heroic partnering to new heights, each lift more spectacular than the one before: horizontal across his shoulders, held up by one leg, and finally, triumphantly, supported overhead by one arm, upside down, while Spartacus walks slowly across the stage. (Just when you thought things couldn’t get any better, she slowly lifts her lower leg into a bent position. Take that!) This exaltation of marital bliss is accompanied by Khachaturyan’s soaring love theme, later the basis for the popular Tony Hiller tune “Journey’s End.” The lachrymose melody proves hard to shake after leaving the theatre. (Like the dancers, the orchestra performed with spectacular muscle and sheen.)

Let’s just say that subtlety is not Spartacus’s strong suit. Neither is variety. There are endless repetitions of the same moves: grand jetés on the diagonal; forceful renversés in which one leg arcs back, whipping the rest of the body around with it; big fat turning jumps with one leg pulled up to the opposite knee; and for Crassus (the impressive Alexander Volchkov), a signature jump with the torso and legs curving backward, like a fish whipping its tail as it leaps out of the water. Patterns repeat themselves with similar insistence. By the final act, a certain tedium has inevitably set in, despite several thrilling battles to the death. Then comes the crucifixion.

For all this, it’s perfectly understandable why the company has continued to dance Spartacus over the years, especially on tour. Like Don Quixote, it’s a calling card; it says “we are the Bolshoi,” big, dynamic, explosive, unafraid of the grand gesture or accusations of poor taste. Sure, the act of bringing it to the Lincoln Center Festival is a sign of retrenchment, of a company – or perhaps even a country – in the midst of an identity crisis. In the absence of a compelling vision, the Bolshoi can always rely on Spartacus to whip the audience into a frenzy.

Certainly, it’s hard to imagine a dancer more suited to the role of the pure-hearted revolutionary than Mikhail Lobukhin. Though he spent eight years at the Mariinsky before joining the Bolshoi in 2010, he’s the embodiment of a Bolshoi type: the hero-dancer, in the Vladimir Vasiliev mold. Lobukhin offers himself to the audience with every ounce of energy he possesses, erupting on the stage, hair flying, chest projected forward, muscular arms open, eyes shining with feverish intensity. And he manages to do this while appearing completely natural and true, and not the least bit narcissistic; his dancing emanates selflessness and total belief. And because of him, we believe in it too, if only for a little while. 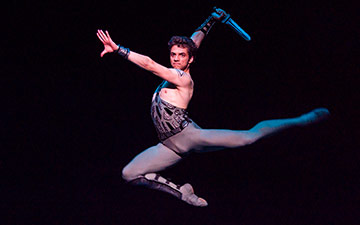 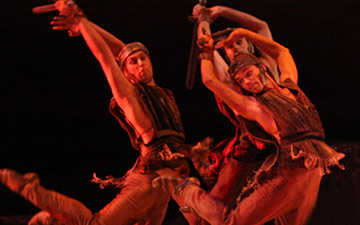