After creating his first piece for New York City Ballet (“Clearing Dawn”) earlier this fall, Troy Schumacher has just brought his own ensemble, BalletCollective, to the Skirball Center. The seven dancers who currently make up this four-year-old group are all friends and colleagues from City Ballet, where Schumacher is in the corps. One, Ashley Laracey, is his wife. There is a strong sense of stylistic cohesiveness; they have the same training, the same Balanchinean attack, the same musical sensitivity. Schumacher puts these qualities to good use, and even manages to find new ones.

In fact, what stood out most in the performance I saw was the feeling that the dancers believe in the world they are creating onstage. They dance for themselves and for each other. Seldom, if ever, do they direct their gaze toward the audience. Their world is complete as it is. We are invited to peek in, as if standing in the wings.

The evening consisted of three works, two of them new, one from last year. All That We See, one of the recent creations, is the most fully realised, with clear structure and a strong line leading from beginning to end. The same is true of the music, by Ellis Ludwig Leone, played with emotive sweep by the ensemble Hotel Elefant. Despite its episodic structure, it has an arc, with motifs that return to remind us of what came before. Then it builds in a great crescendo, setting the stage for an exhilarating finale. The two other ballets end abruptly, as if Schumacher were trying to avoid a fuss.

Perhaps this avoidance of grand final statements is connected to Schumacher’s clear desire to dodge balletic clichés: straight lines, geometric patterns, hierarchies of soloists and ensemble, traditional partnering techniques. And it’s a good thing – it’s part of the reason why his ballets feel so alive. You can’t predict what comes next. But by the same token, the avoidance of classical structure can make the choreography feel choppy. The phrases of movement occur in bursts rather than evolving through their own internal logic. It’s all impulse, without much development.

But passages and images stay with you. In The Impulse Wants Company, Taylor Stanley steps into a lonely arabesque, only to be joined by the rest of the cast, clustering around him in a gesture of solidarity and stillness: “You are not alone.” Later, he skitters across the stage as if dancing on hot coals, his feet barely touching the ground, his body almost electrified. Stanley has never looked more in command – with a combination of precision and abandon – than he does here. The same is true of the others. Claire Kretzschmar, long, lean, supple as taffy, dances with a rapt intensity that reminds me of Wendy Whelan. Her body expands and contracts and vibrates with the music, like the string of a violin.

If All that We See comes across as more complete than the other ballets, it may be because it is the only one that doesn’t draw upon an explicit external narrative. Schumacher’s unique approach involves distilling ideas and images from outside sources, often literary. He uses these sources the way Cunningham used chance procedures, as a way to break out of his own mental habits. Both The Impulse Wants Company and Dear and Blackbirds are loosely inspired by poems written for him by the company’s resident writer, Cynthia Zarin.

The dances feel vaguely narrative. Something is going on but we can’t quite make out what it is. In contrast, in All that We See, the source is more abstract – shapes and colors from a painting by David Salle. As a result, both the music and the choreography are less programmatic, freer. Ludwig Leone uses unexpected orchestral colors: a saxophone, a guitar (or is it a mandolin?), electronics. Schumacher’s response is also fuller, in a dazzling moment reminiscent of Jerome Robbins’ Glass Pieces, each of the five dancers responds to a different line in the music: hopping, walking, gliding, slicing through the air with their arms.

Dear and Blackbirds finds a middle ground. Performed by Laracey – a dancer with an inner glow – and Schumacher, it hints at a storyline. But it’s a pas de deux, and pas de deux always have a story, the story of two people. Schumacher choreographed the male part for Harrison Coll, a dancer with a limpid, gentle tone, but he was injured at the last minute. Schumacher dances it gleefully, as if bursting out of his skin. (Incidentally, he looks great in his own choreography; he should write himself into the dances more often.) There are some fairly literal passages, caresses and tender gazes and funny little outbursts of annoyance. Schumacher isn’t afraid to depict emotion, but he’s not overwrought. The duet unfolds like a conversation. Often, the woman is the instigator. She’s in control of her body and of her awakening erotic interest. It’s a refreshingly human take on the pas de deux, and, in its own quiet way, quite sexy.

Schumacher’s style is still a work in progress, but clearly he has much to say. His restless need to find a new language within the language of ballet is reason enough to pay attention. 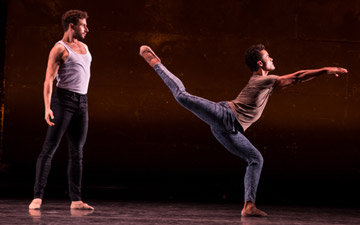 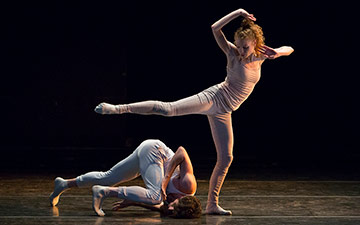