Without hesitation, the rhythm and form of Black Grace takes the breath away. The New Zealand group, founded by Neil Ieremia in 1995, incorporates contemporary dance with traditional Samoan dance styles such as Fa’atoupati (slap dance) and Sasa (seated dance).

When the curtain goes up for Minoi, the light falls on a group of robust golden pecs. Standing in a triangle formation, the shirtless male dancers chant in soothing, hypnotic tones. The downstage dancers move slowly, arcing one arm and then the other while the back row keeps the beat, slapping their thighs. The lyrics change, the dancers mouth numbers, and then they stop. In the still of the theatre the game changes: a rhythmic blur of snapping fingers and clapping fists begins and is quickly broken by a swift, darting diagonal arm gesture – like lightning – creating a yo-yo tug to the heart, a suspension, a millisecond of levitation for the audience. Everyone gasps. The work evolves into a more tribal celebration; the staid choir-like chanting takes a primal turn, and the ensemble breaks out of its en face formation. While there is plenty of noise to be had on stage, the dancers’ jumps (not their foot stomping) are miraculously silent.

Pati Pati, which uses male and female dancers, is an assemblage of excerpts from four of Black Grace’s earlier, full-length works. Where heritage seems at the core of Minoi, Pati Pati has more overt fusion between traditional and contemporary dance forms. Black Grace’s dancers boast a distinctive posture: so upright, so taut, that when their bodies take on arcs, bends, leans and curves the physical geometry stands out, gleaming and crystalline. You see the moon in the curve of their arms, and when they clap their hands, you’d think their hands could flutter away, like so many doves.

Mark Morris Dance Group’s Words is set to excerpts from Felix Mendelsohn’s Songs Without Words. Out of the 48 wordless and rather sweet lieder, Morris chose the less familiar, but no less pleasant melodies.

By the end of Words, you’re in the mood to tumble down the side of a hill, shoeless, and run up the hill and do it again, even if it’s raining. In Morris there is always superb musicality, so superb it appears effortless. Morris and his dancers work very hard, but it never shows. Like many of his other works, Words makes you think of play, of skipping and Maypole dancing, but there’s a lot of Greek there too, all those poses on those vases, the gentle Olympiad, and the Hellenic blouses designed by Maile Okamura don’t hurt either.

Sometimes an artist’s aesthetic is so strong, and the contemporary world so permeated with information, that is impossible to “unsee.” It is rare these days that an artist is fully anonymous, and all it can take is one snippet of a documentary to burn an image into the brain. Morris has an exceptional troupe of intelligent dancers, but it is just as easy to see them all as Morris, dancing all of the moves himself. But his gift for fluid ensemble choreography remains unparalleled, and whether or not he intended it, certain vignettes feel like joyful, jumpy Balanchine parodies, as when the dancers hold hands and weave in and out of each other (ring a ring of roses, a pocket full of posies).

Russell Maliphant’s Two x Two is an expansion on his 1997 solo piece Two, made famous by Sylvie Guillem. Anyone who has seen Guillem perform Two knows how the movement and lighting magnify her surreal form with anatomical precision. If anyone can step into those shoes with aplomb it is Yuan Yuan Tan, performing courtesy of San Francisco Ballet.

For Two x Two Maliphant adds another dancer, here performed by Fang-Yi Sheu, downstage left. Some seats at City Center blocked the double dancer view, and some audience members could only see one or the other dancer – my eyes fell on Tan, whose regality is amplified here where for Guillem the movement could be both elegant and feral. It is a treat to see Tan using her egret-like finery in something else, the choreography – anchoring each dancer beneath a single spotlight – fluid and also unyielding, as if under that spotlight the dancers can only perform these exact moves. Whether Maliphant meant for the two dancers to be out of sync by a beat or two, thus creating a sort of blurry, 3D-but-without-the-glasses duplicity is hard to say. Regardless, Maliphant remains an addictive pleasure, and New York dance fans will undoubtedly await his troupe’s December residency at the Joyce with bated breath.

Hans van Manen’s Variations for Two Couples made its world premiere this January with San Francisco Ballet. Full of postmodern ennui, the work looked dated then and looks dated now, with two couples going through the motions without finding the comfort of compatibility. Vanessa Zahorian and Carlos Quenedit were so angst-ridden it felt like a circle dating a square, the vibes awkward, stilted and sexually unfulfilling – even bitter. Had Zahorian chosen different angles, tilting her chin upward, here eyes more open, could it have been different? More fierce and defiant? Maybe, but maybe not. The male choreography here is largely forgettable. Nevertheless, Sofiane Sylve performs with a possession that some dancers only dream of: she is vamp, assured, flirtatious in the allegro movement, and the thespian of the foursome. 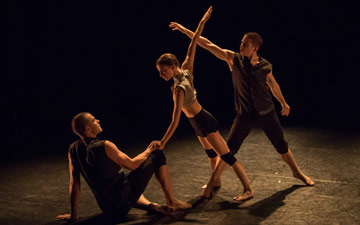