Brazil’s oldest dance company is wearing its years well, judging by this latest double bill. The currently 20-strong Grupo Corpo (Group Body in English), founded in 1975 in Belo Horizonte, is still guided by the Pederneiras family who created it, with Paulo as artistic director, set and lighting designer, and Rodrigo as choreographer.

For this return to Sadler’s Wells (preceding a national tour), they have chosen two pieces with 16 years between them – 2013’s Triz and Parabelo, from 1997 – but which nonetheless seem to share similar preoccupations and similar group choreographic dynamics.

Triz is strikingly designed, with the dancers split lengthways by half-black, half-white body suits so body-con they seem to have been painted on them, and a set comprised of ‘curtains’ of steel cable and strips of light across the floor. ‘Por um triz’ means ‘by a hairbreadth’ in Portuguese, and the ideas of being on the brink of disaster and the sword of Damocles hanging by a hair are apparently the jumping-off points for a piece given jittery propulsion by Lenine’s strings-dominated score.

The yin/yang suggestion of the costumes are most intriguingly explored in the female duet that repeatedly appears and melts away into group work. The pair stay in close, sometimes sensuous proximity; pressing together at the hips as they lean backwards away from each other, then slowly unbending and connecting all the way up; simulating fight moves, with, for instance, the flick of one girl’s hips sending the other forward on to her knees.

Overall, Triz’s trajectory is a little hard to decipher, as its series of varied length sections don’t offer an obvious progression: one is scored by the eerie sound of winding down music boxes; another by the pounding feet and breathless commands of what sounds like a recording of a rehearsal session.

But the dancing throughout is a fascinating blend of classical technique and earthier, popular dance influences. There is a breathtaking precision to the movements, which can then be nonchalantly off-set by a ripple through the body, a gymnast-like hand-flick and thrust-up chin, a cheeky coordinated bouncing back and forth, an exuberant backward bent-leg kick. Crucially, all this movement melds together to suggest a distinctive style rather than looking like a deliberate grab-bag of influences.

And, although Triz feels a little too extended for the ideas it has to work with, its rousing finale is superb, with all the dancers massed on stage as the music reaches its crescendo with a chanting chorus.

Parabelo’s construction is somewhat similar, but the driving force behind this older piece is a representation of Brazil, drawing inspiration from the country’s myth-laden sertão (its dry north-eastern plains) with avant-garde inflected music by Tom Zé and Miguel Wisnik. There are more painted-on body suits (this time with a rather wonderful shot-satin effect), more ensemble work drawing on quite a lot of the same choreographic palette as Triz did. But there are also rather wondrous moments. A low-lit duet where the man holds the woman on his right side the whole time reveals thrilling possibilities of movement in what you’d think was too constricting a scenario, at once classically rigorous and movingly sensual. A scene that resembles a ritual worship, with a keening folk-religious soundtrack and eight women melding prayer gestures and what look like yoga positions – with one on her feet, slowly twisting and gyrating – has a captivating quality. And the boundless energy of the final movement, impelled by dizzyingly fast folkloric music, with the dancers in acid bright red, yellow and orange mixing carnivalesque, liquid samba hip rolls into group work of machine-tooled precision – and beaming in the process – is totally exhilarating. 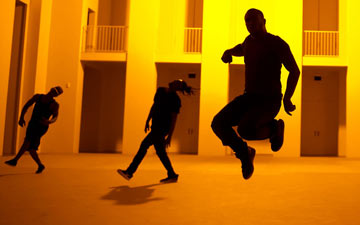