The Washington Ballet hit all the right marks with its 70th anniversary season opening program at the Sidney Harman Hall in October. It was contemporary ballet at its most entertaining, stylish and stylistically diverse in a triple bill that featured 5 Tangos by Hans van Manen, Polyphonia by Christopher Wheeldon and Petite Mort by Jiří Kylián – all three ballets company premiers – and with music by Astor Piazzolla, György Ligeti and Mozart, this program surely satisfied even the most eclectic of musical tastes.

Van Manen’s 5 Tangos brims with a wonderfully feisty energy and is an undeniable crowd-pleaser.  It’s tango with a twist. Here, the choreography has nothing to do with the stereotype of tango as an exotic burlesque with stiletto-wearing ladies desperately clinging to macho-looking men. In this elegant and chic dance for seven couples, the poise and cool formality of classical ballet is effectively merged with the modern dance idiom, all firmly rooted in an ardent tango spirit.

5 Tangos is one of the greatest hits of van Manen, 82, who is widely regarded as one of the pioneers of European contemporary ballet. For more than half of the century he defined and shaped dance in his native Holland, creating a substantial body of work – more than 120 pieces – most of them for the Netherlands Dance Theater and Dutch National Ballet, the two companies with which his career has been most closely intertwined.

He created 5 Tangos in 1977 for Dutch National Ballet as an affectionate homage to Argentine composer Astor Piazzolla, a legendary king of tango nuevo who modernized traditional tango with rhythms of jazz and rock, giving the new tango music its unique, symphonic sound and elevating it from the streets to the concert stage.

More than anything, 5 Tangos displays van Manen’s affinity with formal and clearly-defined geometrical patterns.  While traditional tango encapsulates the power of heedless passion and the despair of shattered dreams, in van Manen’s hands the dance becomes a highly stylized abstraction glossed by the polished elegance of classical ballet.

On Friday night, the superb cast, led by Aurora Dickie and Brooklyn Mack, danced with rhythmic precision and assurance, giving an effective, even if subdued, rendition of the piece. Mack was riveting in a scintillating solo set to the pulsating Vayamos Al Diablo; his fluid movements, spinning turns and exuberant leaps were as breathtaking as ever. But the ballet’s heart belonged to the excellent Aurora Dickie in an arresting septet accompanied by Resurrection del Angel. Seductive and intriguing, she was the Angel of the title, dancing with serene poise and glamour against the ensemble of six men. Clearly, she was their amorous quest, and they looked at her with both adoration and desire while striding onstage in military-like unison. Yet, for all their attention, she seemed utterly detached. With every step and every glance, she declared her inner power and independence, as if opposing the man-leader and woman-follower formula of traditional tango.

In 5 Tangos the music proved a star in its own right. It was Piazzolla’s genius that unearthed the essence of tango, expressing all the emotional intensity of the dance: its theme of thwarted romance and unfulfilled dreams, its air of obsession and sensuality, and its sense of fate and inevitability.

Christopher Wheeldon was 27 years old when New York City Ballet premiered his Polyphonia in January, 2001. At that time he was NYCB’s artist in residence, and this was his fourth ballet created specifically for the company. If anyone had any reservations about Wheeldon’s choreographic gifts, Polyphonia put all doubts to rest.

Wheeldon envisioned this piece as a musical experiment.  He wanted to explore a drastically different type of music, departing from his preferred lyrical compositions. His choice for the soundtrack was ten seemingly unrelated piano excerpts by Hungarian modernist composer György Ligeti, known for his acerbic, dissonant sound and for the convoluted, polyphonic structure of his compositions. Wheeldon’s Polyphonia is a chamber-size piece for eight dancers. The ballet is full of inventive choreographic ideas which to this day look compelling and fresh.

Dressed in practice-style costumes of deep purple, the excellent cast bravely navigated a series of acrobatically elaborate and sinuously fluid duets and ensembles conjured by Wheeldon. It was a pleasure to see the dancers looking so strong in this technically demanding piece. The supple and feather-like Maki Onuki was splendid in the role originated by Wendy Whelan, a recently retired principal dancer of NYCB and Wheeldon’s long-time muse. Onuki was expertly partnered by a very impressive newcomer, Cuban-born Miguel Anaya, a former soloist dancer with Ballet Nacional de Cuba.

Czech-born choreographer Jiří Kylián is an undisputed master of mysterious dance. His choreographic idiom is inventive, quirky and utterly theatrical. With fencing swords, antique ball gowns and a huge billow of silk as the props, his Petite Morte (1991), originally created for the Netherlands Dance Theater, is more than just a dance. The theatricality and dramatic impact of this piece is one of a kind. No wonder even after more than 20 years since its creation, Petite Morte enjoys its ever increasing popularity.

Thanks to the reality show Breaking Pointe, featuring the dancers of the Ballet West, millions of viewers in this country got a pretty good idea about what it takes to bring this ballet onstage, including the treacherous perils of the props. Yet my favorite part of the dance begins when all the props are stored away and the dancers luxuriate in a series of sexy, spidery pas de deux, accompanied by sublime Mozart. 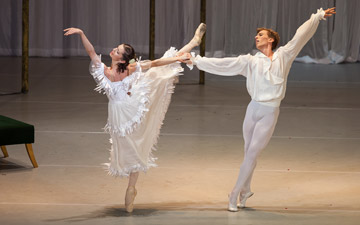 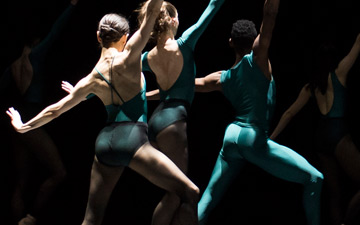