After a successful run of Giselle in March, mixed repertory is what’s on the menu for the rest of Washington Ballet’s 2016/17 season. The first of the three remaining programs offered an assortment of abstract contemporary choreography, featuring two much-loved and well-known works – Jiří Kylián’s Petite Mort and William Forsythe’s In the Middle, Somewhat Elevated (both pieces were performed by the troupe not so long ago) – and a company premier of Justin Peck’s In Creases. In this stimulating and entertaining program, all three ballets had a similar spare packaging (minimal stage décor, unadorned costumes, and simple lighting designs) but were very different in their expressive goals and atmosphere, with the music ranging from a gentle Mozart to a vibrant Philip Glass to a torrent of harsh electronic noise.

Forsythe’s emblematic In the Middle, Somewhat Elevated was created 30 years ago. Still, the ballet retains its explosive spirit and irresistible urgency, as well as its ability to thrill.

The propulsive and astringent metallic score, with its abrasive hisses and crashes of synthesized sound, curtsey of Thom Willems, establishes the ballet’s stark mood and relentless pulse. In response to the score’s sharp edges and its driving momentum, bending the classical ballet vocabulary to its physical extremes, Forsythe creates a fascinating world of fierce energy, erupting dynamics, and off-center movement; and populates it with nine dancers – six women and three men.

Dressed in dark green, dancers negotiate a dimly lit space in what looks like a preparation for combat. Balancing disengaged attitude with perfect articulation of each movement, the dancers compete with each other in accuracy, speed, and determination, their sharply-pointed limbs punctuating and slicing the air with exactitude and abandon. Symmetry and asymmetry collide. The movement never stops – they constantly group and re-group, forming solos, duets, and ensembles in their relentless quest for center stage – a riot of flashing legs, titling bodies, and piercing glances.

The Forsythe is a perfect curtain-closer, but this vigorous and physically punishing work is not for the squeamish. The Washington Ballet dancers stood up to its numerous challenges, proving a good fit for Forsythe’s arduous, no-nonsense virtuosic style. In the leading male role, Brooklyn Mack was marvelously alive and immaculately precise at every turn. An extraordinary athlete and a virtuoso dancer, he was securely at home in such fast and technically-demanding work. The fearless Kateryna Derechyna demonstrated all the tension and detachment her role required, dancing with brio and an astute sense of timing. Perfectly mixing arrogance with remoteness, the vibrant Ayano Kimura delivered each step with polish, precision, and a jolt of youthful energy. From the rest of the cast, standout performances came from Andile Ndlovu, Francesca Dugarte and Nicole Graniero.

If In the Middle, Somewhat Elevated is pure adrenaline, the program’s opening number, Kylián’s Petite Mort, is pure erotica. Created for Nederlands Dans Theater and premiered in 1991, this ballet combines sensual balletic virtuosity with elements of theater to intriguing effect.

I have never cared much about the ballet’s opening part, with its rapier-swinging men and all the razzle-dazzle that involves a billow of silk and cutouts of antique ball gowns. It is the second movement that I find the most absorbing, where the six couples, one by one, take the spotlight in a series of individualized, erotically-charged duets, all accompanied by the luscious, heart-tingling sounds of Mozart.

Dancing with confidence and pleasing lyricism, the excellent cast reveled in this intimate yet highly-effective part of the ballet. The luminous Francesca Dugarte and Jonathan Jordan, and Morgann Rose and Gian Carlo Perez were particularly memorable, their wonderfully-nuanced performances eliciting gasps of admiration from the audience.

Only a few years ago, Justin Peck was considered an up-and-coming choreographer. Today he is a prominent voice to reckon with and resident choreographer with New York City Ballet, the company in which he dances as a soloist. Created in 2012, In Creases was Peck’s first major effort for NYCB.

Set to a selected music from Philip Glass’s “Four Movements for Two Pianos,” In Creases runs and flows like a bright stream down the mountain on its way to the ocean. Eight dancers (four men and four women), all dressed in unassuming white, create onstage a miniature world that feels both poignantly intimate and powerfully communal. Peck’s choreographic patterns and structural designs possess a wonderful sense of musical logic; his unique, unmistakable style feels at once efficient, effortless, touchingly genuine and humorous.

On Saturday matinee, the cast gave a fluid and confident rendition of the piece, unearthing its animated nature and playful vibe. EunWon Lee and Gian Carlo Perez shone in the central roles.

Glass’s invigorating music was performed live – an extra treat for the audience and dancers alike. Playing on two grand pianos situated onstage, Glenn Sales and Eric Himy did a fine job, bringing out the rushing sonorities, multi-layered textures and complex dynamics of the score. 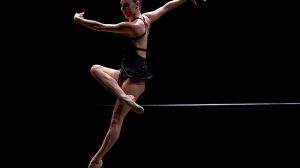 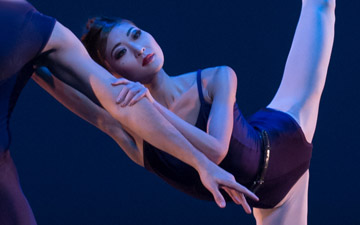