Matthew Bourne’s retelling of Tim Burton’s 1990 film, Edward Scissorhands, has returned to Sadler’s Wells for the festive season, nearly a decade after its premiere there. It’s both an invented gothic fairy tale and an update of Mary Shelley’s Frankenstein. Though it has a downbeat ending, Bourne raises audiences’ spirits with cheerily choreographed curtain calls, a heavenly chorale and drifting snowflakes. Outside, trees in Rosebery Avenue sparkle with lights in the winter darkness.

An ace storyteller, Bourne has no need of a plot synopsis in the programme. The cast list reveals that the ancient crone who launches the prologue is the heroine we have yet to meet, recalling the tragic tale in old age. The opening scene is set in a gloomy mansion in the woods, where a boy is struck by lightning while playing with a pair of garden shears. Cue a Mayerling-like funeral with umbrellas as the name Edward is displayed on a headstone.

The boy’s inventor father is a short-lived Dr Coppélius, who fashions a replacement boy out of pieces of leather, with pruning scissors at the end of his arms. Father is mugged to death by local hoodlums before he can finish the boy’s hands. Orphaned Edward will have to find his way in the world in his incomplete state.  Dominic North is an endearing, stiff-legged humanoid with a gentle, mournful face and twitching blades for fingers.

His plight stirs compassion in the first woman who finds him, Peg Boggs (motherly Etta Murfitt). She takes Edward into the Boggs household in Hope Springs, an American suburb of pastel little boxes.  Six families live there, all with two children, all named in the cast list, not that it matters. Lez Brotherston’s designs, parodies of 1950s suburbia, bring colour into Edward’s grey life and joy to the stage. Misfit Edward is soon accepted into the cosy community, who never stop partying.

Not the sharpest knife in the box, Edward gets by at first by imitating others until he flourishes thanks to his talent for topiary and hairdressing. He becomes a celeb with his own salon and clientele, human and canine. As a ballet hero, he is given a dream sequence in an animated garden, in which he partners his ideal woman, Kim Boggs – Ashley Shaw, as sweet and bouncy as her pony tail. The dancing topiary who accompany their first duet look like the ungainly kids in the school play who have to be trees instead of people.

In the party scenes, Bourne has created a comic showbiz version of Pina Bausch’s ironic ensembles. The characters are stereotypes, dressed in dated outfits for sunbathing, cheerleading or ball-going. There’s the inevitable vamp and cowed husband, the sadistic bully and easily-led youngsters. Unlike Bausch’s people, they dance frenetically, with enviable energy but little individuality. They share the same routines, dance the same steps to Terry Davies’s jazzy score, based on Danny Eifman’s film music. The set-pieces tend to pall because the jollity is relentless, the dancing caricatured.

Dominic North’s Edward has a chance to show his inner grace and would-be elegance in his duets with Kim – one with dream hands, one with icy shards flying from his metal fingers, the last one with tenderly folded blades. The role is far more poignant than the original from 2005, though not as heart-rending as the prince’s fate in Swan Lake, Bourne’s masterpiece. As befits winter, Edward’s tale is a sad one, though we mustn’t mind too much at Christmas time. 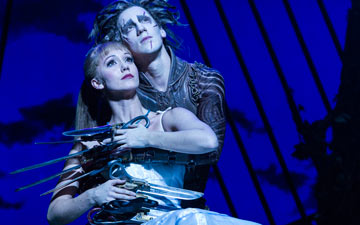