There are dances that grip you from the first moment, and others that get under your skin, little by little, drop by drop. Liz Gerring’s Glacier, which premièred in 2013 at Montclair and is currently playing at the Joyce, is the latter, a work imbued with a preternatural coolness, confident in its own silence and stillness. Its palette is gray and white; the costumes, casual and athletic, are both neutral and flattering to the dancers’ muscular bodies. (Gerring’s dancers have a pleasing heft that adds to the plushness of their movement.) The backdrop, made up of three white panels (by Robert Wierzel), is relaxing to the eye, like sitting in a well-lit room.

So, too, Gerring’s choreography and Michael Schumacher’s score. Schumacher collected sounds during a stay at Glacier Lake in Colorado, then mixed them with electronics, piano, flute, and electric guitar. We hear the boom of thunder, the buzzing of insects, the crackling of fire, but also disconnected passages from the slow movement of Beethoven’s seventh symphony, played on the piano. These wisps of melody come late in the hour-long work, as haunting as sounds drifting through an open window. (One of the dancers whistles to herself, as if to break the spell.) Gerring, who has said that she makes steps independently of the score – at least at first – responds with choreography that feels both abstract and personal, grounded in the earth and in the patterns of natural phenomena, expansive and intimate.

The dancers come and go with the naturalness of tides or weather patterns. One of them (Tony Neidenbach) arrives halfway through the piece, launching into a series of energetic jumps, legs tucked under him. Each dancer supplies a different tonality, a quality of movement, sometimes a new step or shape, which may or may not be picked up by the others. One of the greatest pleasures is Gerring’s use of repetition and echoing. Movements, like a tilted, swooping balance – suggesting a bird in flight–return again and again, echoed by this or that dancer. There are others: swinging elephant-trunk arms, falls that become slides, running, circles. Patterns emerge, then dissolve. Nothing can be predicted.

There are hints of Trisha Brown in the use of momentum and the push-and-pull between bodies, as well as in the free, loose way the dancers move their torsos and arms. The precision and detail of Merce Cunnigham is discernible in Gerring’s use of the legs and feet, though she seems less interested than Cunningham in contrasts of tempo and rhythm. The dancers give off an air of athleticism, directness and a kind of care, particularly in the way they handle each other. One man (Brandin Steffensen) carries another (Benjamin Asriel) on his back as he crawls and rolls; a woman (Adele Nickel) leans on a fellow dancer (Brandon Collwes), then weaves her body into the spaces carved out by his, like a child seeking protection. Though Glacier is not an emotive piece, there is a sense of collective purpose and interconnectedness. I found myself thinking of Edward Hicks’s Peaceable Kingdom, an ideal in which animals, humans and nature live in harmony and balance.

Subtly, gradually, the piece builds, in a slow crescendo. And then, just as quietly as it began, it ends. Glacier is as elegant and understated a dance as you’re likely to see. 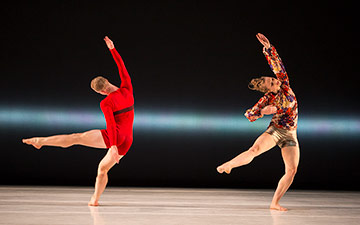 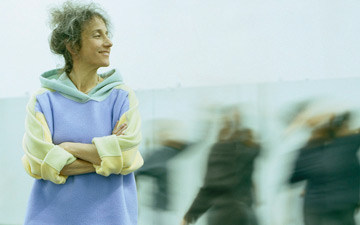