Expecting the unexpected comes with the territory of any production by Tanztheater Wuppertal Pina Bausch and so even unplanned events can seem to be part of the show. When the fire curtain fell near the end of Ahnen, ironically after several, minor, scripted conflagrations on the stage, then refused to rise again; Michael Strecker’s explanation that there was a technical problem was met with such blank disbelief from the audience that he was forced to come back twice, eventually announcing an extra interval, saying plaintively, “there really IS a problem”!

This led to unsurprising conjecture – amongst those milling around waiting for the shortest final act ever to be seen at Sadler’s Wells – that the on-stage flames had inadvertently brought down the fire curtain, which had then carried out its protective function by refusing to budge. In fact, the safety curtain is supposed to fall – a part of Bausch’s deconstruction of the normal stage set – but it stayed put, failing to release the stage for the last few minutes of the performance.

This recalcitrant fire curtain was a perfect metaphor for Ahnen, which is much ado about waiting. In fact, enforcing an additional 20 minute sojourn upon the audience was so relevant to the overall theme of Ahnen that perhaps it should be retained for future performances!

A feeling of desolation is immediately conveyed by the cactus-strewn landscape: an image of heat, dust and permanent siestas, which is emphasised towards the end of Act 1 when rubbish is blown around the set. The cacti also add to the permanent deconstruction of the theatrical experience, since some of Peter Pabst’s monumental, green phallus-shaped plants (complete with thousands of hand-stitched nylon – soft – “spines”) are placed upstage and thus interfere with the transparency of the fourth wall, presenting obstacles behind which some of the action transpires.

Ahnen is also a landscape full of people doing mundane activity to mark time, with no discernible purpose: Julie Anne Stanzak rubs a bar of soap against a board, while caressing her own knees; Jean Laurent Sasportes sits silently amongst the cacti – dressed as an American Indian – doing nothing in particular; a huge walrus lies similarly motionless; and in the far right downstage area a house is partially constructed from bricks. Like everything in Ahnen, it is destined to remain unfinished.

More than once I found myself reflecting on Ahnen as a reality game show of the “Big Brother…Castaway…Get me Out of Here” genre. A bunch of people with nothing in common have been left in a desert landscape with nothing to do but wait to see who outlasts the others. The unexplained presence of the walrus might be more in keeping with the absurd plot of Lost than Big Brother but my money would be on the hairy, long-toothed sea mammal to win!

As in all works by Bausch – and for the record I should say that Ahnen dates back to 1987, sitting between Viktor and Palermo Palermo in her output of some 40 works (it is, in fact, the 20th completed piece) – there are numerous leitmotifs and moments of stand-alone genius that somehow pull everything together. No less than six of the cast who performed at the premiere are still in the show.

Among the repeated motifs are several examples of darkness and confusion. A woman in a red ball gown (as always, Marion Cito’s costumes for the women are both sexy and glamorous) wanders around the cacti, as if she has somehow got lost in a desolate landscape while on her way to a grand party; another – obviously rich – woman, tended to by Strecker as her butler, reads letters while wearing sunglasses. They must be painful memories because she holds a revolver as if planning to commit suicide but, instead, she fires the bullets into the air; another woman lies comatose in a see-through box while buckets of water are poured into it (on one of these occasions she struggles to reach out to play an adjacent piano from inside her watery coffin).

Lighter moments come with spoken text, dance and music. The “waiting” theme is furthered by an episode in which three men lie on sunloungers; one (Dominique Mercy) sings Carmen’s Habanera, unaccompanied while his “French” friend (Lutz Förster) translates the lyrics sardonically for a “Chinese” man (dressed in traditional clothing and with a long thin moustache) who simply nods. In amongst all the early comings and goings, a woman dances a Highland reel, bouncing from one pointed foot to another, which would have been completely incongruous but for the earlier presence of a kilted punk who seemed to be organising a group photograph of some folk wearing cat masks and another carefully carrying a lettuce. This, of course, made the Scottish dancer no longer incongruous!

The most magical moments came with the repeated intricate dances of arm movements and hat tricks performed by Mercy, front of stage, the latter while Fred Astaire sings Isn’t This A Lovely Day (To be Caught in the Rain) from Top Hat. We hear the sound of rain cascading onto the plastic sheeting protecting the building site (a sound one assumes Bausch felt to be beautiful; and – in a simple way – so it is).

The introduction of Carmen’s aria gives another clue to the bedrock of the work. These people washed up in a desolate place are all searching for love; perhaps already, like the suicidal rich woman, impacted by love’s unpredictability. Associated with this are many images of people seeking security, making a place for themselves: building a house, making a bed of straw, ironing pillows, cooking food, even sinking into that transparent box full of water.

None of this provides a solution. Even the moments of humour are only an oasis of momentary relief in this desolate, windswept place. Ahnen ends inconclusively, with the women still aimlessly powdering soap and rolling balls of string. The Sadler’s Wells fire curtain made an anarchic ending even more chaotic. By refusing to budge for 20 minutes, just chilling out on the stage, it was just another walrus. Life goes on, and we wait. 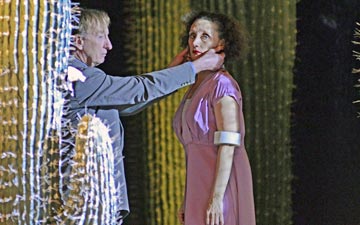 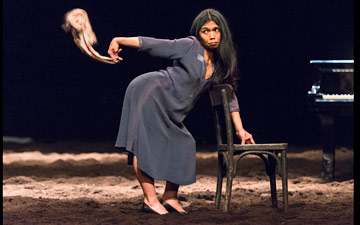