Pina Bausch’s 1984 work, Auf dem Gebirge hat man ein Geschrei gehort, opens with a panic-stricken community of soberly-clad people running from the stage into the auditorium. The only sound is their gasping breath and urgent footfalls, until they return to the earth-laden stage. We never learn what kind of disaster threatens them, though the title is taken from the German wording of a St Matthew Passion chorale recounting Herod’s decree ordering the massacre of the innocents.

The piece will develop into a collage of seemingly unrelated incidents contrasting power and helplessness, cruelty and tenderness, childish pleasures and bitter experience, counterpointed by an ironic use of popular music. So far, so familiar, now that a number of Bausch’s Tanztheater pieces have finally been seen here, thanks to Sadler’s Wells and the Edinburgh Festival. Auf dem Gebirge comes from her gloomy period, when she was more concerned with the imagery her performers could dig out of themselves than with their abilities as dancers.

Bausch’s characters, based on their original casts, are never anonymous. In Auf dem Gebirge, the dominant figure is a grotesque strongman who spends the first half of the evening in red bathing trunks, swimming cap and goggles. He wantonly destroys innocent hopes and pleasures, bullies women and men and cannot be challenged. Michael Strecker (in the role created by Jan Minarik) retains his overweening self-assurance throughout, even when his nose is squashed by a string round his head. He could be a caricature of any authoritarian monster – Herod, Hitler, Big Brother, Gaddafi.

The balloons he blows up until they burst or he sits on them reappear later on as a motif of fragility. His lack of compassion is counterbalanced by Dominique Mercy, who takes care of Lutz Förster (company veteran, like Mercy, now artistic director). Förster’s gaunt aquiline character appears to be blind, escorted by Mercy into retracing a joint dance routine like two old music-hall hoofers, as Fred Astaire’s voice sings ‘Maybe I love you too much’.

Love cannot be forced, though the crowd gang up on two of their own, a man and woman, dragging and pushing them into a reluctant embrace. The group is inclined to hysteria as they hurtle in circles like a pack of animals to Mendelssohn’s rousing ‘March of the Priests’. Each burst of mass activity is followed by a calmer scene for one or two people: an Oriental duo of women in girlish frocks simper at the audience before turning cartwheels; a tall man wearing a feminine black velvet leotard demands to know why we’re looking at him while a small woman gestures behind his back.

With exceptions – stroppy gruff-voiced Nazareth Panadero – the women seem to live in a dream world of their own, putting up with brutal treatment from the men. Their sisterly solidarity is savaged by a man trying to make them ‘say uncle’, yelling in frustration that he wants to rape and kill. Strecker appears to flay the back of a subservient woman in a black petticoat, who repeatedly allows him to do so instead of escaping. Two men yank at women’s hair, as screaming, the frightened females clutch dresses in front of their semi-naked bodies. The stage has filled with billowing smoke that could come from burning corpses or ghettoes. Or maybe it’s just mist, transforming the earthen floor into moorland.

A mournful aria ends the first half as tiny, sad Ditta Miranda Jasjifi stands alone, covered in grey powder as though she has aged with grief. She is still there when the interval ends, mutely suffering while a man crouches at a tiny piano, playing (badly) ‘Cry Me a River’ in between stripping to his underwear. A forest of fir trees is brought on, amongst which a woman turns somersaults and another beds down as if on a grave, to ‘Parlez-moi d’amour’. A woman in a pink ball gown appears slashed with red lipstick as though bleeding. She is bandaged up to resemble an Egyptian mummy as mist hangs prettily above the group in action – yet another outbreak of odd behaviour in formal outfits for a cocktail party.

Then comes, for me, the sequence that redeems the arbitrariness of the second half. A group of elderly musicians assemble calmly beneath the curlicues of mist. As they play thé dansant tunes, sweet, beautiful Thusnelda Mercy listens solemnly. Her attention is distracted by having to slap insects biting her arms and face. Fantasy takes over as four men lift her into the air as though she’s flying or swimming to the music. Happiness, like youth, is fleeting. An old crone totters past (Dominique Mercy? her father.) A younger man leaves white traces of his presence on the earth, soon to be erased.

The piece ends much as it began, with frantic, hunted people running and falling on the soil, getting grubbier and grubbier as they repeat the ritual of forcing an exhausted couple to kiss. Mendelssohn’s triumphal martial music blares out once again. As darkness falls, there’s a gleam of light – a promise or a final extinction? After two and a half hours, drained of emotional energy, we’re almost beyond caring. 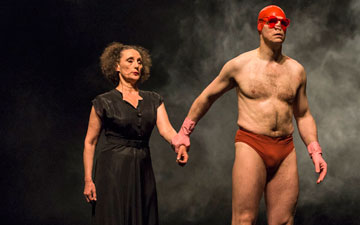 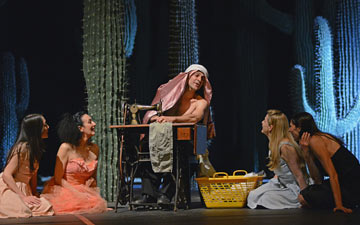