Halfway through American Ballet Theatre’s fall season at the Koch, it is beginning to feel like two weeks are really not enough. The dancers look thoroughly refreshed by the opportunity to dance mixed bill after mixed bill without having to play courtiers or peasants. So far I’ve caught Valse Fantaisie, Le Spectre de la Rose, The Green Table, Monotones, Brahms-Haydn Variations, Company B and a truly infectious new Mark Morris, After You, that gets better with each viewing. Spectre is the only ballet that hasn’t taken flight; maybe this Fokine fantasy, with its Art Nouveau curlicues and floppy wrists, it is just too far removed from the inner world of the current generation of dancers.

One of the chief pleasures of ensemble works like After You, The Green Table, and Company B is seeing corps dancers and soloists hold their own next to seasoned principals. It’s like an injection of energy for the whole company. Both casts of the new Morris—an ode to civility and comradeship—were superb. At the Oct. 24 matinee, Gillian Murphy’s role was danced by Isabella Boylston. Where Murphy was confident and a little cheeky, Boylston was more lyrical and pliant, her lilt perfectly suited to the flute part in the score. Calvin Royal III’s burst of jetés, limpid and soaring, was replaced by Roman Zhurbin’s less explosive but more open-hearted leaps. Morris has given the company a work in which every dancer has an opportunity to shine with equal brightness. The final movement, in which they trade off a little phrase made up of kicks (accompanied by heavy chords) followed by bouncy ballonnés (a descending scale) and finished off with a casual pas de bourré (woodwinds), is a marvel of simplicity and musicality. Hummel’s Septet in C Major, with its clear phrasing, dynamic contrasts and Mozartian melodies, rewards second and third hearings.

A highlight of the season is the return of Kurt Jooss’s The Green Table, made in 1932. This meditation on the folly of war in eight scenes has lost none of its punch. Set to jazzy, silent-movie-ish music for two pianos by F. A. Cohen—dramatically played in the pit by David LaMarche and Daniel Waite—the ballet proceeds with a frightening efficacy. It begins with a stylish tango, as a roomful of men in frock coats and grotesque masks strike poses and pound on a table covered in green felt. This charade of diplomacy ends in a declaration of war. The men draw pistols. Then, as crashing chords pound away on the piano, a terrifying death figure appears. The dancer’s face is painted to look like a skull. Wearing a Roman helmet, leather straps, and boots, he marches mechanically, slicing the air with his arms as if clutching an invisible scythe. In the scenes that follow, soldiers march off to war, women abandon a burning town, a young woman is lured to a brothel by a war profiteer, and the woman resistance fighter is shot after carrying out an act of sabotage. Always, death is there, ready to pick them off one by one.

What makes The Green Table so effective is the precision and restraint of Jooss’s dance language. The steps are plain; as a result, the scenes they denote feel all the more harrowing. (This time around, as I watched the refugee scene, I couldn’t help thinking of the people fleeing the violence in Syria.) The death character shows glimpses of humanity, even gentleness. Some go to him willingly. Death isn’t evil, Jooss shows us, it just is, terrifying and inexorable. It’s a difficult role to pull off, relentless in its intensity. The last time The Green Table came around at ABT, David Hallberg—tall, fair, princely—mustered a darkness no-one knew he had in him. This season, it’s being performed by Marcelo Gomes and Roman Zhurbin. So far I’ve seen Zhurbin (Oct. 24), one of the company’s most effective actors; he uses his eyes particularly well, staring out like a reptile from behind his monstrous mask.

Spectre didn’t come off nearly as well. Herman Cornejo (Oct. 23) dances it with gorgeous musicality and just a whiff of Art-Nouveau decadence, but his virile approach is slightly at odds with the curling, vine-like fussiness of Fokine’s choreography. (The ballet is about a young girl who falls asleep after a ball and dreams that the rose she carries in her hand has come to life in the form of a man wearing pink from head to toe.) At the Oct. 24 matinée, Daniil Simkin was more sprite-like, at least until he slipped on a slick spot on the stage, as dramatically as if he had stepped on a banana peel. But he recovered to give a spirited, if stylistically flat, rendition. Of the two dancers in the role of the girl, Cassandra Trenary was the most convincing in her depiction of a girl dancing in her sleep, limp arms and lolling head concealing all effort.

On both programs, Spectre was followed by Valse Fantaisie, a windswept pas de deux by George Balanchine set to a waltz by Glinka. Neither cast danced it with the urgency and sense of perpetual motion I saw at this year’s School of American Ballet Workshop performance, but the Oct. 24 cast came closest. On Oct. 23, a cast led by Hee Seo was terminally languid: she started behind the beat and never caught up. The ballet is filled with piqués, a step in which the foot stabs the floor, Balanchine uses them to show us the accents in the music but neither Seo nor the four-woman ensemble seemed able to find the accents with their pointes. (James Whiteside, Seo’s partner, was more energetic.) On the 24th, Devon Teuscher rode the wave of the music, and the four women followed suit. The ballet went from insipid to taut in an instant. Her cavalier, Joseph Gorak, danced with his usual impeccable form, and with more vigor than usual. He may be coming out of his shell at last.

At the Oct. 24 matinée, The Green Table was replaced by Paul Taylor’s Company B, an ABT favorite. Like the Jooss, it’s a dance about war and death, but Taylor masks his subject beneath a friendly demeanor. The Andrews Sisters songs to which it is set may be cheerful, but, as the hints of darkness accumulate, the cheerfulness rings more and more hollow. There is no innocence, no eternal love, no happiness in Taylor’s world. Sterling Baca and Skyler Brandt galumphed winningly through the “Pennsylvania Polka” as a line of soldiers marched off to war behind them, in slow motion. Misty Copeland brought a seductive mix of demureness and sex appeal to “Rum and Coca-Cola,” a calypso about girls “working for the Yankee dollar” for the boys on leave in the tropics. Gorak was polished, relaxed and poster-boy-handsome in “Boogie Woogie Bugle Boy.” The company wears Company B like a second skin. It’s become almost too familiar. Today’s performance was not the most incisive I’ve seen. But with dancing like this, one can’t really complain. 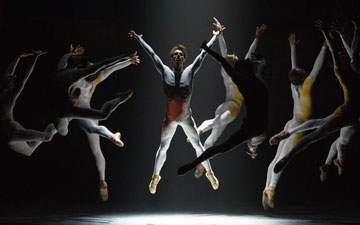