One has a basic idea of what to expect from a Lines Ballet performance – gyroscoping torsos, tendril limbs unfurling in all directions, balances that defy physics and whipping turns that blur before disbelieving eyes. These are the choreographic building blocks that Alonzo King stacks in different ways to create his high-concept works, based on themes like architecture and nature. King’s exquisite taste in musical collaborators, from tenor-sax master Pharoah Sanders to tabla virtuoso Zakir Hussain, embeds his movement in rich contexts.

Nonetheless, for all their ambitious artistry and the magnificent physicality, King’s works can feel repetitive. But his new work, The Propelled Heart, reveals the true purpose of that repetition: it is a mantra on movement, a rhythmic communion between artists and audience, a channel for the energy we summon together in a darkened theater. And in The Propelled Heart, King and his collaborators turned San Francisco’s Yerba Buena Center for the Arts into a tabernacle.

The high priestess in this ritual is singer Lisa Fischer. Many people first heard of Fischer in 20 Feet from Stardom, an Academy Award‒winning documentary on backing singers, and that’s when they realize they’ve been listening to her for a lifetime – her heartrending wail is the soul of “Gimme Shelter” and she has spent decades touring with the Rolling Stones, Luther Vandross and Tina Turner. Fischer and French composer JC Maillard collaborated on the score for The Propelled Heart, which combines original songs, covers from Fischer’s oeuvre and Maillard playing live on strings, flutes and percussion, mixed with sound samples.

Dressed in a crinkled silk cloak trimmed with ostrich feathers, Fischer sings into two microphones that create different vocal effects as she wails, croons and testifies; a man in the house spoke for everyone when he shouted “Sing it, Lisa!” during her rendition of Bertha Gober’s civil-rights song “We’ll Never Turn Back.” With a range from resonant lows to crystalline high notes, she gives voice to the dancers’ primal movement, and from time to time they respond to her with guttural grunts, spoken word and choral echoes. Fischer also performs her own choreography in the dancers’ midst, and though she has told interviewers that she is “not a dancer,” she is a master at sharing the stage with other artists.

The twelve dancers flood with intense, immediate physicality that leaves one spent just from watching. Fischer is their match – matching musical wits with the likes of Mick Jagger must have been ideal preparation for the virago that is Lines Ballet. At times she even directs them, taking their hands or lifting the men by their hair to raise them from a fetal crouch, only to see them crumble back to the ground.

In sixteen sections that blur together over ninety minutes, King delves more deeply into themes he touched on in his immediately previous work, Biophony – origins of life, the essence of energy, emergence from the primordial ooze. The extensive floor work has the dancers writhe and arch, squat and crawl like spiders and splay their legs into rotating splits, infusing refinement into the raw urgency of birth. Their partnering evokes the interdependence of all life – enveloped by Shuaib Elhassan, tiny Laura O’Malley achieves balances and extensions otherwise not possible on a planet defined by gravity, and one senses her total trust as she arches forward, head raised to the ceiling and falling blindly out to the ends of his outstretched arms.

Madeline DeVries and Michael Montgomery’s pas de deux was echoed by Kara Wilkes with Babatunji, who danced their own phrases on the other side of the stage. Intimate and entwined, the partners functioned more as avatars of one soul than as separate beings. Yujin Kim, in a slow solo across the stage, drew the company’s fractal energy into herself and provided a welcome moment of calm before the next storm of motion.

In spite of its numerous solos and duets, The Propelled Heart is an ensemble work. If any one dancer were removed from the piece, it might topple, and no single performance would be as potent outside the completed work. All of them deserve mention – Courtney Henry and Adji Cissoko with their magnificent extensions, Jeffrey Van Sciver’s lightning pirouettes with arms alternating up and down, Brett Conway and Robb Beresford in spasmodic solos, each battling to emerge from some spiritual chrysalis.

Only section VII, immediately before intermission, wants revisiting – and badly. Two couples dance sentimental pas de deux to “How Can I Ease the Pain.” It’s a fine song, and Fischer’s recording won the 1992 Grammy Award for Best Female R&B Vocal Performance. But it’s far too mainstream for The Propelled Heart. The heavy schmaltz brings us crashing down from on high.

Robert Rosenwasser’s diaphanous costumes, with multiple changes for each dancer throughout, stoke the momentum of this work. In lieu of sets, Axel Morgenthaler creates a world within a world using exquisitely suggestive lighting and a billowing fabric panel on the back wall.

The Propelled Heart is a full-immersion experience, a wading into the waters of dance as a spiritual practice. The run continues through 15 November, but is completely sold out. Believers, pilgrims and would-be converts will have to wait for its second coming. 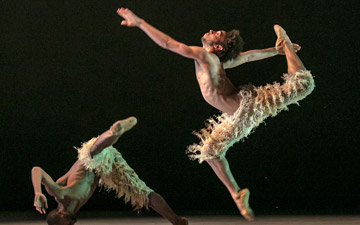