San Francisco choreographer Alonzo King is as famous for his collaborations as for his distinctive choreography. But while the movement he creates for his namesake Lines Ballet is immediately recognizable for its undulations, whirling speed and off-center gravity, his musical and visual partnerships are often surprising: name another choreographer who has found artistic communion with Coltrane sax man Pharaoh Sanders, Indian vocalist Rita Sahai, architect Christopher Haas and Academy Award–winning effects artist Jim Doyle.

Never has that been truer than in the Lines spring season that opened Friday, April 3, at Yerba Buena Center for the Arts Theater: for the world premiere of Biophony, King collaborated with the entire natural world. Inspired by the work of bioacoustician Bernie Krause, Biophony features a score of animal and habitat sounds from Krause’s recordings of 15,000 species, minimally accented by percussion, strings and winds by avant-garde London composer Richard Blackford.

Biophony’s nine segments comprise an ecotour narrated by crickets in the American Southwest and forest elephants in the Central African Republic (“Consilience”), oceans of killer whales, parrotfish and croakers (“Mare Nostrum”), Kenyan pigs and Egyptian geese (“Still Life at the Equator”). The squinty suspicion that it’s a children’s educational recording soon gives way to a keening poignancy at hearing voices that humanity is crowding off the planet.

That sense was foremost in my mind as I watched King’s dancers, each one a beautiful creature at the peak of youth and power. Though none has been with the company farther back than 2011, all are finely tuned to King’s sensuous, athletic intensity. In “Winds,” petite Laura O’Malley took the guise of a bird, flitting in tiny hops and prances, then opening a leg from bent and flexed to a full extension that rippled all the way through her pliant foot. Behind her, a flock of dancers crossed one leg over the other, folded at the torso and flung their arms up, wrists bent.

In “Mare,” a spotlit Kara Wilkes and Robb Beresford slowly touched, turned and wrapped around one another like sea creatures, drifting from stage left to stage right as though carried on an ocean current. Accompanying them were whale songs and dancers who swam across the floor and crossed upstage through Axel Morgenthaler’s kelp-green lighting and Robert Rosenwasser’s stage fog, an effect remarkably like the long-distance view of a scuba diver. A change from pale camouflage leotards to black latex unitards took the dancers from land to water; costumes changed frequently to complement the current biosphere.

Newcomer Adji Cissoko and company star Courtney Henry gave solos that were less animalistic than balletic, highlighting their long legs and diaphanous tunics. King’s origins in ballet also echoed through Jeffrey Van Sciver’s pirouettes; yet in Biophany King explored a deeper groundedness than is usual in his work, with Babatunji pausing midway through elbow cartwheels to flick one foot in midair, Michael Montgomery propelling himself in low walkovers, Shuaie Elhassan looping his ribbon legs into a natarajasana pose.

Biophany’s power is in these moments, when it seems to reunite the tame and wild worlds. Where it falters is when it does so too literally. While the filtered light of “Tempestas” lures us under the rain forest canopy, a shade other than bright green would have lent more nuance to “The Frog Who Desired Moonlight.” Similarly, whirling ensemble choreography dulled the zing of “A Gift of Bees” when other sections evoked more emotion through abstraction. And while the piece opens and closes with clarity as O’Malley writhes across the stage, the arc in between is less a progression than a meandering.

That may explain the silence after the curtain fell. The audience sat still for a good ten seconds, perhaps wondering whether Biophony was over or unsure how they felt about it. They acknowledged the dancers’ first bows with mellow applause. Slowly but surely, though, they rose to their feet and crescendoed into roars, hoots, hollers and whistles, an ecstatic biophony of their own.

King’s version is weighty where Balanchine’s was delicate, earthy where it was ephemeral, muscular where the original strove to appear effortless. Flexed bare feet replace extended pointes, and bodies are exposed bare-legged in midnight-blue velvet leotards and shorts rather than draped in demure white ballet skirts and tights. Both pieces weave through the music with syncopated movements and layered counterpoint; lithe and intense, Madeline DeVries especially embodied Concerto’s musicality.

The Philharmonia Baroque Chamber Players, a subset of the San Francisco’s renowned Philharmonia Baroque Orchestra, played the music live. Most unfortunately, poor miking made them sound like a muddy recording. Hopefully the theater fixed the problem in time for the rest of the eight-performance run. 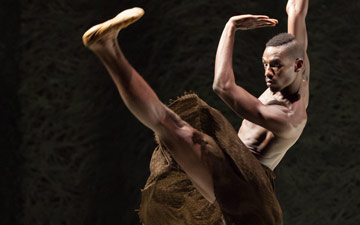 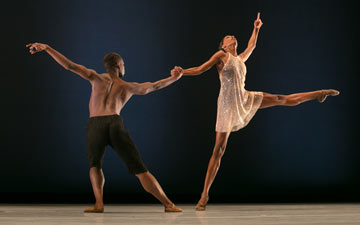