With the onslaught of cases of unarmed black men being killed by the police, the comforting illusion that racism in America was on the wane has been shattered. More and more statistics reveal disturbing disparities, from rates of incarceration to the scarcity of non-white ballerinas at major ballet companies. In this context, Donald Byrd has created an updated version of a work that originally premiered in 1991, The Minstrel Show (now The Minstrel Show Revisited).

The central conceit is unchanged; Byrd riffs on the format of the minstrel show, a revue-style entertainment that predated vaudeville and included dancing, low comedy, variety acts. White actors performed in blackface, creating broad parodies of what they perceived as African American archetypes – like the lazy, dimwitted, high-stepping bumpkin or the folksy, kerchief-wearing “mammy”. Minstrel shows were wildly popular in the early twentieth century, and not only among whites. There were minstrel shows in which blacks wore blackface and, in essence, mocked themselves. The past is often difficult to understand.

Like their predecessors, the performers in The Minstrel Show Revisited wear thick black face paint with white circles at the mouth and eyes, big woolly wigs, and white gloves. (Byrd’s company, Spectrum Dance Theater, is based in Seattle.) They dance with exaggerated cheerfulness and faux innocence, do splits, wag their backsides and do high kicks, smiling all the while. The idea is to elicit discomfort. As Byrd writes: “It is difficult because we are asked to stare into the face of the minstrel ‘black-face’ mask and it stares back at us.” The audience’s reaction is part of the show.

This is particularly true in a prolonged section in which Byrd comes onstage and, in a professorial tone, elicits racist jokes from the audience. Eventually six people agree to play along, each introducing his story with the line “well, Mr. Jonson,” pronounced – as he has instructed – in an exaggerated southern drawl. Curiously, on the night I attended, most of the jokes poked fun at Jews and Asians. Predictably, they weren’t very funny. And this turns out to be the principal problem with The Minstrel Show: the minstrelsy act is neither funny enough nor pointed enough to elicit much discomfort at all. The cakewalks, soft-shoes and burlesque are well-danced but generic, the stereotypes too far removed from the very real issues of racism to sting. One line out of Donald Trump’s mouth is more shocking than anything in the first half of the show.

Fortunately the second half, which includes most of the new material, is much stronger. (The whole evening could lose at least half an hour: almost every skit goes on too long.) A parody of Gone With the Wind includes several couples gliding across the stage in hoop skirts. They gaze out at the horizon as a recording plays “My Old Kentucky Home,” a melancholy ballad by Stephen Foster that includes lines like this one: “’Tis summer, the darkies are gay, the corn top’s ripe and the meadow’s in the bloom.” (The message is further complicated by the fact that Foster wrote the song while under the influence of Harriet Beecher Stowe’s abolitionist novel Uncle Tom’s Cabin, for which he was praised by Frederick Douglass.) While the couples promenade, a black man (Davione Gordon) attempts to flee, his wrists bound. The shadow of lynchings hangs over the whole scene. Nostalgia for the antebellum South – still very much with us – reveals its ugly underbelly. Later, a dance for four men dressed in “Mammy” costumes sends them gliding across the stage in their hoop skirts, wagging their backsides as they scrub the floor. It’s more imaginative than anything in the first act, and for that reason twice as effective. Then come the discussions of Trayvon Martin and Michael Brown.

The tone shifts dramatically. The performers are no longer in blackface. The stories are told simply, starkly, with the aid of official transcripts. Two people read while the others strike tambourines or act out stylized versions of the killings. No-one is smiling anymore, and that’s as it should be. 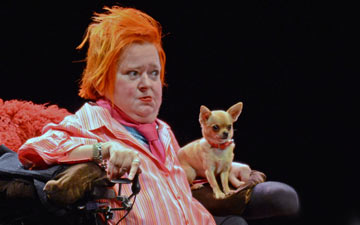 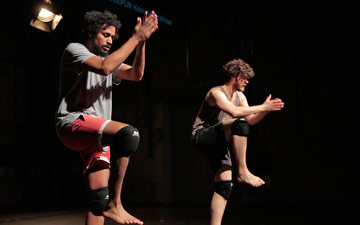 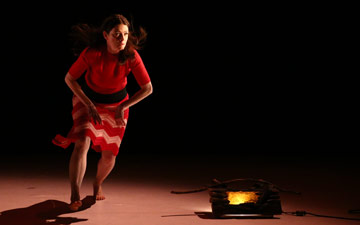 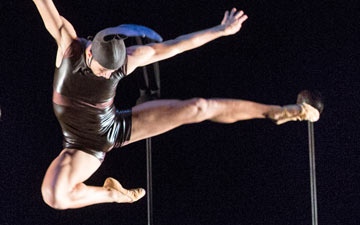