Gallery of pictures by Foteini Christofilopoulou (of the 2014 show in London)
whitelightfestival.org
www.nycitycenter.org

It’s near impossible to find anything bad written about British composer Thomas Adès. Conductors, critics, festival producers and choreographers love him. As part of Lincoln Center’s White Light Festival this year, an entire Adès program, which premiered at Sadler’s Wells last year, was transplanted to New York for a brief weekend.

Adès himself was involved in all four pieces, either playing the piano or conducting St. Luke’s Orchestra in the tiny, shadowy pit at City Center, looking quite thrilled to be here.

The four hot names on the bill were Karole Armitage, Wayne McGregor, Crystal Pite and Alexander Whitley. While this is a generalization, it’s safe to say the most hotly anticipated work of the night was Pite’s Polaris, set to Adès’ work of the same name.

A mob of headless bodies – limbs knotted together, heads down – works its way downstage at the start of Polaris. Clad in charcoal, techno-fabric, swat team jumpsuits, the mob fills the theater with swishing sounds, as if an insect swarm is headed for the orchestra pit. The costume’s deflated hunchback bubble at the top of the spine rings with a faint memory of H.R. Giger’s “Alien” aesthetic.

Polaris, as a musical entity, works its way through all 12 pitches before arriving at A, the piece’s guiding light, its North Star. Pite’s embodiment of the work is both post-apocalyptic and primordial. Even with the occasional shining light that pours down from the rafters, Polaris is consumed by shadow. Humans associate darkness with an ending – blackouts make us worry the end is near, black is the color of mourning, darkness is what we finally imagine happens behind our eyes when the lights go out. But in some origin stories, such as Genesis, darkness existed before the light. Darkness can mean a beginning as much as an ending, and Polaris churns within this ambiguity.

Pite’s synchronized choreography – there are lots of roll offs – is hypnotic, and a somewhat atypical use of en masse synchronicity within the realm of contemporary dance, which often exhorts the ethics of minimalism over maximalism. The sheer number of bodies onstage – there are 66 – is enough to make most people gasp, but the roiling mass they create when moving together is mesmerizing, terrifying and dehumanizing. It is a Broadway-like, Busby Berkeley spectacle turned on its head and applied to a genre which doesn’t often capitalize on this kind of spectacle (though Batsheva does in Minus 16, especially in an expanded anniversary performance). Individuals do not exist but a copycat collective does – an army of ants, of beetles, of some crepuscular creature.

Dancers kneel and curl their bodies forward, close their fingers together and bend their elbows sharply, like insects. Pite’s piece packs the punch or wow factor, and when she gives her dancers individual movement, they are astonishing – fleet, precise – their bodies bursting with an unprecedented sense of energy and power. Polaris is an intellectual exercise in minimalist maximalism: a limited movement vocabulary, aesthetic and color palette combined and multiplied to the nines. The lingering memory in the mind is more of a singular, moving sculpture than a work of dance. It is a form of pageantry likely to be copied by others, but Pite is too savvy to do it herself, and creatively has probably already moved on.

Much of the movement in The Grit in the Oyster, a recent work by young British choreographer Alexander Whitley, is led by the head and the top of the spine. Bodies are yanked around either sideways or in nosediving spirals as led by the top of the body. Natalie Allen is particularly good at this, with a continuous line of energy visible from the initial momentum all the way to her fingertips. Whitley’s choreography looks decidedly different on her than on Antonette Dayrit, whose back remains straighter and whose moves are more linear. Wayne Parsons, the third member of this trio, feels more like an accessory than a key player in this work, set to Adès’ “Piano Concerto.”

Wayne McGregor’s Outlier is a brisk affair, with dancers from Wayne McGregor | Random Dance whirling through unrelenting choreography. Set to Adès’ “Concentric Paths,” Outlier is busy and hyper-restless. Both men and women are forced into a variety of contortions, but there are frequent limitations pressed on the female dancers: hands around their throats, heads pushed down and forward by a man’s hand at the back of her spine, hands covering her face, etc. Balanchine frequently choreographed man-moving-woman but McGregor’s take has a rougher hand, but both choreographers occasionally apply a phantom, external armature to the female body. The pas de deux for two men is the highlight, in particular a spiraling lift of a dancer in parallel – a brief moment of visual respite in the piece. Adès’s conducting was sensitive and sensual to this rather brutal work.

The only humor in the evening came from Karole Armitage’s Life Story. Dating from 1999, Armitage’s work for two dancers is set to a piece by Adès for piano and soprano-singing of Tennessee Williams’ eponymous poem about the ubiquitous one-night stand. Ruka Hatua-Saar performed with a rather (perhaps over) animated Emily Wagner while Anna Dennis sang the words from Williams’ darkly comic, cynical and too true poem. Adès gives the soprano role some epically shrill notes, which transforms Williams’ poem into something out of “Sex in the City,” wherein someone, in this case a woman, loudly flaunts their sexual escapades and complains about them. It is jarring for anyone already familiar with Williams’ poem who perhaps had read it differently (lower muffled voices, chuckles, asides), but perhaps Adès is giving Williams a whiff of 21st century modernity. 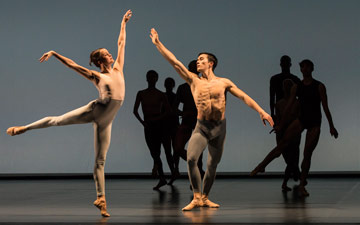 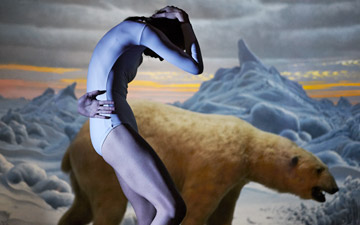