It seems an age (well 4 years) since NDT2 were last touring the UK and I’ve missed them. They might be the young company of Nederlands Dans Theater (aged 18-23) but they put on a fine show, always looking well rehearsed and sharp – this year was no different. Their European/Kylian-inspired repertoire I usually find refreshing too, as it tingles my eyeballs in ways they don’t get much tingled in. Kelly Apter has a piece in the program under the title “Emotion in Motion” and it’s a good badge for what NDT2 are about – there is nearly always something going on beyond ‘just’ movement.

Their tour opened in Woking, which is where I saw them, and takes in 11 theatres, including London’s Sadler’s Wells, where the tour ends on the 20 May. Much of the tour contains the 4 works I saw, but there are some variations in places so check on the tour website for specifics elsewhere (www.ndt2tour.co.uk). Overall it was a well balanced programme with works by 3 choreographers we’ve seen before and a new piece by Edward Clug – not so well known here but creating a stir in Europe, it seems.

The evening opened with Johan Inger’s delightful I New Then to a medley of Van Morrison songs. Mumbly and evocative by turns, the songs reflect the teenage confusion of the 4 girls and 5 boys on stage as they strive to be individuals, fit in with the group and discover their bodies. It’s only 28 minutes long but fits in a load of funny and endearing scenes and characters overlaid by quicksilver quirky movement that feels human and lovable. My hit of the night, and I hope it gets taken on by other companies.

Edward Clug’s mutual comfort, for 2 couples, was the new-to-the-UK work and the programme volunteers little information other than Clug saying its about grown-ups. To a driving piano work by Milko Lazar, this is dance as hard work – fast, fidgety and difficult to get a handle on. Almost a Cubist painting of a piece that some might find satisfaction in unlocking. All that sharpness and tension certainly displays the dancers’ technical chops but hard to appreciate beyond that, if it has the merit of being a short 11 minutes. Clug needs more helpful programme notes, I think. Hans van Manen’s Solo needs no programme notes. To 7 minutes of a Bach Partita, for 3 boys, it grows into a dazzling technical display of music and dance. Exhilarating work and such clarity of movement, this is contemporary bravura from a choreographer who so effortlessly straddles the worlds of ballet and dance. I always wish we saw more van Manen in the UK.

The evening closed with Alexander Ekman’s Cacti – effectively the headline piece of the tour and you must have been living on Planet Zarg to have missed pictures of it, with a stage full of dancers posing with a selection of large cacti. Ekman’s a maverick – he recently did a Swan Lake where he created a real lake on a flooded stage. Cacti is in the repertoire of many, many, companies around the world and Valerie Lawson recently interviewed him for us in Sydney – a good read about a piece of dance that actually is a riposte to some dance writers who annoyed him.

It’s the first time I’ve seen Cacti and it comes as something of a shock to see that the cacti only appear relatively late in the work’s 27 subversive minutes. It starts with dancers on white plinths of various shallow heights, noddling interestingly, sometimes separately, sometimes in stunning unison. Then they shuffle the plinths around to give different perspectives and after a while the pretentious and windy words of an anonymous critic are heard, and of course it’s hard to reconcile the movement and the affected voice-over. At other points it’s like a Mr Universe display, an argument between partners splitting up (who gets the cat?) and a physical workout. The dancers eventually, and very reverently, bring out the cacti – playing amongst themselves and with us – what on earth is going on here, almost like a weird Escher world. It closes with the dancers slowly advancing towards us, smiling manically as if about to pass on a cactus so we too can gain the gift of eternal happiness. Bonkers fun and I consider myself well chastised… 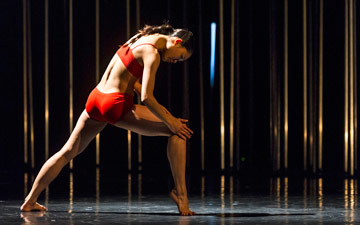 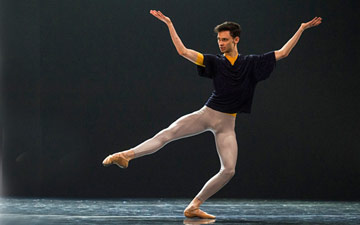 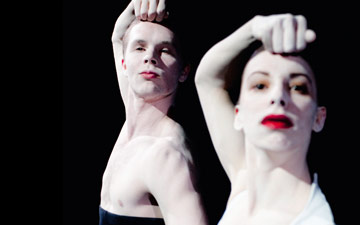