This is the first time I’ve gone to Durham for a matinee and I’m glad I did. Jessica Lang’s Wink was only premiered the night before and by the end of its 25 minutes I was raring to see it again. I recall feeling broadly the same way about her first piece for BRB – Lyric Pieces, premiered 4 years ago. And like the earlier work, Wink featured interesting movable sets, good live music and terrific-looking costumes. Nothing grungy here, but nothing really old-fashioned either.

Wink is Jessica Lang’s response to some of Shakespeare’s sonnets – sadly the programme doesn’t list which ones but you hear snatches of them spoken as a preamble to each section of the work. Sometimes the words are accompanied by a solo, most notably at the beginning when a commanding Brandon Lawrence thrills with big expansive contemporary ballet movement, beautifully controlled and moderated. But all of Lang’s movement feels like that: controlled, human, open hearted, quietly exuberant and immaculately executed by the cast of 10. There are no jagged knife-edge steps; if that were the movement of hard diamonds then Lang does pearls – soft, luscious and connected.

Lang is greatly helped by her music – a commissioned piece from Jakub Ciupinski who delivers a classical string score that starts slow and grave, full of emotion, but becomes more minimalistic later for a more empathetic male section where 4 dancers work in unison, their fists punching the air at times. It’s a macho display but not in any nasty way. There is also a section, which seems more clearly narrative-linked than the others, as Brandon Lawrence and Lewis Turner have woman trouble with Delia Mathews splitting them up. She also takes on an Amazonian role, mixing it with 3 of the men and more than holding her own.

I don’t find Wink all plain sailing – the narrated words that split up the various sections are clearly supposed to shed light on what’s happening, but I can’t concentrate on the words and the dancers at the same time – the dance and dancers always win in this first viewing. Normally this situation would frustrate the hell out of me but here the dance is so classy, and also the design, that I was absorbed regardless. Design-wise, ranged around two edges of the stage are 7 sizable panels (3ft high by 5ft wide say) that can rotate to show a black or a white side. The back of the stage can also be made black or white and as the dancers rotate the panels you get another dynamic of play and movement. The set is by Mimi Lien with Elaine Garlick and Suzanne Parkinson responsible for the costumes, which are mainly white with the very merest hint of ‘off’. The females are in flattering dresses that move well and the boys in tights with a loose-fitting diaphanous textured top. For anybody totally fed-up with the “tight trunks, high cut knickers and video projections everywhere” look, this work restores faith in more thoughtful and less follow-the-herd design. All up, while I might not fully understand the context of every section in Wink I didn’t need to know, as my eyes popped at quality movement without any dull moments – a 4 star piece. We need to see more of Lang’s work – at 4 years it’s taken way too long to plot her return to BRB.

If Wink pleased me no end with its movement, the work that closed out the show, Jose Limon’s The Moor’s Pavane, within seconds of opening made me lose the will to live. I’ve seen the ballet, Limon’s 20 minute telling of Othello, a few times over the years, but I normally associate it with dramatic older dancers, blazing eyes and smouldering asides. But BRB are a young company and it feels rather wrong to inflict this work on them. That said, of course, they are a dramatic company and this famous piece is very dramatic and boiled down to characters rather than detailed plot. I saw Cesar Morales as Othello and wished I had seen the first cast Tyrone Singleton with his powerful stage persona. I hope others find much more merit in it then I.

Between the stunning, and the not, came 3 pas de deux – from Ashton’s Dream, MacMillan’s Romeo and Juliet and Cranko’s Taming of the Shrew. The latter, at full length, enters BRB’s repertoire next month. Elisha Willis and Iain Mackay made a jolly good dramatic fist of Shrew but there is a lot of comic timing in the movement, and that takes a while for a partnership to settle into; this tour will usually sharpen that for the main performances. I saw Momoko Hirata and Cesar Morales dance a full Dream in Birmingham 3 months ago and this time Hirata seemed much more at ease as Titania. Morales moves as beautifully as ever but I just don’t see any character there. Best of the short pieces was the famous Romeo and Juliet balcony scene where the innate nobility of Tyrone Singleton acted as a perfect foil for the giddy and girlish intoxication of Celine Gittens. As believable and moving as it gets.

Postscript: Having produced the above I went off to have a quick look for other reviews of Jessica Lang on DanceTabs and came across this splendid quote from Marina Harss: “Her dances may not represent the future of ballet, but they are a satisfying extension of its present and its past.” I think that captures Lang very well at the moment – she is special and in her early 40’s has a load of years yet to do wonderful and thoughtful work that should rightfully impact many. 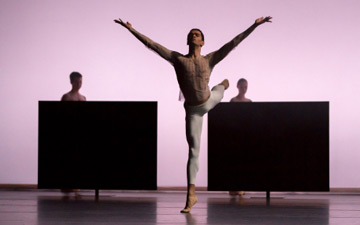 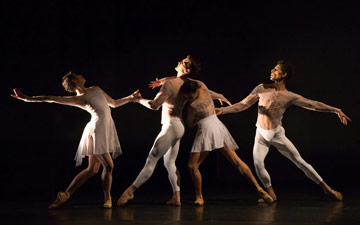 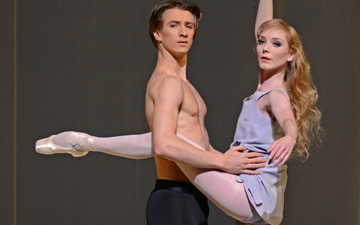