American Ballet Theatre’s spring season has turned into a kind of voyage into the mind of Alexei Ratmansky, its choreographer-in-residence since 2009. Early on, the troupe unveiled his newest work, a sophisticated ensemble-piece inspired by Leonard Bernstein’s musical meditation on Plato’s Symposium. Then followed a retrospective that included his moving exploration of Soviet-era themes, the Shostakovich Trilogy; and his Oz-like Firebird. In a few weeks, the season closes with a Sleeping Beauty, new last year, in which he channeled the delicacy and musicality of an earlier time by studying turn-of-the-century ballet notations from the Russian Imperial Theatre. As it has become increasingly clear, this is a choreographer with diverse passions, for whom ballet is a house with many rooms.

With his Golden Cockerel, which had its company premiere on the evening of 6 June, we see yet another facet of his imagination, not unrelated to the others, but different enough that it may take some getting used to. (The ballet was originally staged for the Royal Danish Ballet in 2012.) Ratmansky has taken this strange, sardonic little tale by Alexander Pushkin and fashioned it into a ballet that is both comic and strangely cutting, in which violence and love are treated lightly, like episodes in a Punch and Judy show.

Ratmansky did not come up with the idea of turning Pushkin’s folktale – about a spoiled czar whose kingdom is protected by a magic bird – into a ballet. Nor did he wholly invent its tone; in this he was helped by the Russian composer Nikolai Rimsky-Korsakov, whose 1907 opera is the basis for the ballet’s score. (The composer and musicologist Yannis Samprovalakis provided the orchestration, with solo instruments replacing the voices.) In the opera, Rimsky-Korsakov riffs on Russian folk tunes and marches and exotic-sounding melodies. The languid, descending chromatic lines illustrate a style that the music historian Richard Taruskin famously defined as “nega,” or, “the lush languor of the orient as viewed through European eyes.” (Think of the “Polovtsian Dances” in Borodin’s Prince Igor or of Rimsky-Korsakov’s own Sheherazade.) Except that here, these decorative arabesques are used to entertain rather than to seduce, with a wink to the audience. They are intentionally cartoonish, playfully tongue-in-cheek. Ratmansky follows suit, weaving Russian and “Persian” characters together in wild and happy dances.

The Golden Cockerel’s history is long and full of twists. Pushkin did not actually invent the story or hear it from one of his rural informants, as he did other folk tales. The inspiration is literary: Washington Irving’s volume of travel writing, the Tales of the Alhambra, which Pushkin read in French shortly after its publication.

Rimsky-Korsakov turned the story into an opera whose main character, Czar Dodon, was a caricature of the reigning Russian monarch, who had just bungled the Russo-Japanese War. But in order to get it past the Imperial censors – and, one assumes, for his own delight – Rimsky-Korsakov made all the characters as cartoonish and silly as possible. This two-dimensional, flat, modernist take on Russianness made the opera an ideal choice for Diaghilev’s Ballets Russes, who staged The Golden Cockerel as a ballet-opera in Paris in 1914. Years later, for an offshoot of that company, the same choreographer/director (Michel Fokine) created a new version. This time, he dispensed with the singers. That 1937 version was Ratmansky’s main inspiration.

The Ballets Russes spirit is very much in evidence in the current production. The sets and costumes, by Richard Hudson, are inspired by the originals (1914 and 1937), which were by Natalia Goncharova, a Russian modernist whose flat, fauvist designs were based on folk art. The Hudson designs are a wonder to behold: bright, full of ruby reds and golden yellows, leafy greens, sapphire blues, screaming fuchsias. There is a Matisse-like roundness of line. The patterns and overlapping colors are completely flat and nearly blinding in their variety: vines set against flowers set against bulbous palaces set against jewel-toned skies. The costumes are equally rich: voluminous and patterned and multi-layered. It all culminates in a fabulous procession filled with fluttering banners, mythological beasts, balalaika-players, kids.

It’s not hard to see that Rimsky Korsakov’s opera paved the way to Igor Stravinsky’s Firebird, composed only a few years later. The two composers and their librettists used the same formula, a mix of pageantry, invented Russian folklore and exotic Eastern magic. The difference lies in the mood. Firebird is more elegiac and mysterious, while Golden Cockerel is detached, closer to puppet theatre than to Russian mysticism. As if to drive this home, Rimsky Korskov’s opera ends with a postlude, recited by an astrologer – the man who had presented the golden cockerel to the czar. In this short coda, he explains that nothing in the opera was real. It was all an illusion.

In the ballet, the astrologer shows each of the characters one last time, except that now they move like puppets. It’s like seeing the Wizard of Oz behind the curtain. This ironic twist must have appealed to Ratmansky. His work often betrays a decidedly ironic bent. In his 2003 ballet The Bright Stream he made gentle fun of the ideals promoted by the Soviet “tractor ballets” – all hail the happy Russian farmworker! – and in his 2013 Shostakovich Trilogy, he satirized the athleticism and heroic outlook of Soviet life. At the same time, he showed great empathy for the characters in these ballets. It’s a very Ratmanskyan mix: affectionate irony.

Similarly, in his Golden Cockerel we see a foolish, fat, sometimes murderous czar who is also child-like and appealing, like a big baby. His housekeeper (Martine Van Hamel) loves him, and tucks him in at night. On opening night, the czar was performed with warmth and humor by the veteran character dancer Gary Chryst. The object of his infatuation, the Queen of Shemakhan, was Veronika Part. She is perfect for this role: sexy and languid and long-limbed enough to make the exotic shapes read clearly. The czar is a mostly pantomimic part, with some partnering and clowning thrown in; the queen dances more. One of the things people may struggle with is the proportion of pantomime to dance, which is heavily weighted toward pantomime and “character,” i.e. non-classical, dance. There are folk dances and acrobatic trios and comic dances, but not a lot of what most people would call “ballet.” It’s best to know this in advance: think of it as musical theatre, in which singing is replaced by pantomime.

Which is not to say that there are not some gorgeous passages of dancing on pointe, including the solo for the queen, set to Rimsky’s dreamy “Hymn to the Sun.” (Despite Samprovalakis’s glistening orchestration, I missed the hyper-virtuosic singing in this and a few other arias.) Dressed in silky pantaloons and a silvery-blue tunic, and crowned with enormous feathers, the Queen spins, with exquisite slowness, in attitude, shakes her shoulders, moves her arms seductively, then backbends to the floor. (She also does a Russian dance with a tambourine.) The czar’s sons, too, dance virtuosic, clownish solos, full of elegant caprioles that devolve into splits and dives.

But the most startling, dazzling dancing is the choreography Ratmansky has devised for the cockerel (Skylar Brandt). Here, he has outdone himself. Her movements are both bird-like and stiff, like those of an automaton: she slides on her pointes and bends 90 degrees at the waist, and then she folds about eight ways to land on her knees on the floor. She kicks her legs up to her nose, while hinging her upper body. She flutters, just a few inches above the stage, her feet moving so quickly you can barely see them. It’s a total tour de force, and looks like a real killer. To the four women performing this role on alternating nights: may you receive many massages.

The show still has some kinks, not surprising given how big and elaborate it is. A couple of cues seemed off, a light came on at an odd time, and at one point a hand could be seen pulling something offstage. The ensembles were not quite together, which matters because, with so much to look at, things need to be as neat and clean as possible. The production will settle over time. But as long as you don’t come expecting Le Corsaire, you’ll have a good time. Bring your kids. 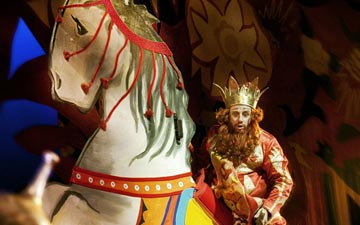