The Golden Cockerel, Alexei Ratmansky’s new work for the Royal Danish Ballet, is above anything else a gorgeous spectacle. Richard Hudson’s designs, a reworking and expansion of those Natalia Goncharova made for the Ballets Russes production in 1914, are a riot of colour and fun: the originals must have been a sensation of almost the same order as Bakst’s Scheherazade  – ‘stupendous’, said C.W.Beaumont, not a man given to exaggeration. Even now you could spend an amusing hour or so just listening to Rimsky Korsakov’s music and watching how the set changes and the Queen’s tent grows in the desert and the Tsar’s horses and the giant camel parade across the stage.

Ratmanksy’s job was to add the human element to this, telling the story – roughly, how a Tsar promised anything to an Astrologer in return for a golden bird which would warn him when danger threatened his country, and how the bird killed him when the price asked turned out to be too high and he reneged on the deal – and bringing it to life through the fresh choreographic approach and the off-beat humour which have become his trademarks in this genre. And as he did both of these things with a fair degree of brilliance, the ballet ought to be a rip-roaring success, but for me it narrowly but crucially misses its mark.

Partly it’s a question of tone: the ‘assumed artlessness’ (Beaumont again) of the designs is matched by a faux-naivety in the action which I didn’t find sat well on the Danes – I kept thinking it would look much more at home in Moscow. (And  it’s interesting that from the comments I’ve read and heard so far, those who know the company best are on the whole the least happy with the ballet.) The more serious problem is the format: the ballet is presented as a two-act piece, played on its own,  and the story just doesn’t have enough substance to make a satisfying evening. It ends with the Tsar’s death but it’s not a tragedy – it’s a cautionary tale (seen at one stage as a political satire): he got what he deserved, nobody in the ballet cares and nor do we. The characters are little more than caricatures and though there’s plenty of comedy, Ratmansky has choreographed it so tightly that there’s hardly any room for the dancers to bring something of their own to their roles, and I quite soon began to feel as if I was watching a children’s cartoon. Which wouldn’t matter if it didn’t go on so long: cut  down to a single act and shown as part of a properly-balanced double or triple bill it could work beautifully, rather than sending me home feeling hungry.

Meanwhile there’s still much to enjoy, especially when Gudrun Bojesen is on stage, having a lot of fun as the Queen of Shemakhan, the object of the Tsar’s doting adoration. The Tsar himself was Thomas Lund: he’s a brilliant comic and he gets his laughs, but the humour is quite conventional and it’s hard not to wish he could have been given something rather deeper for his last new role as a dancer. I was impressed by Cédric Lambrette as the Astrologer – it’s a bigger role than he mostly gets and he brought some real authority to it – and by Lena-Maria Gruber, a small dancer who dances ‘big’, as the  golden bird itself. Ulrik Birkkjær and Gregory Dean were the Tsar’s two sons, neatly contrasted and both of them well cast. They get a lot to do in the first act, with a comedy solo each and some extensive flirting with their girlfriends, but their only appearance after that is as corpses on the battlefield when the curtain goes up on Act 2. (They’ve killed each other, I think.)

Ratmansky’s touch is most obviously and rewardingly to be seen in the dances he’s invented for the ‘boyars, farmers, warriors and oriental ladies’ who fill the background of his story with a swirling kaleidoscope of colour and character, grotesque and funny and sparky by turns or all at once. When he’s good he’s very, very good and I’d really like to see this piece reworked so that the whole thing makes an equally strong impact.

(Admin footnote: though I’m pleased the company has cut the programme book down to a more manageable format, I hope the omission of an English translation of the synopsis is an oversight rather than a permanent change.) 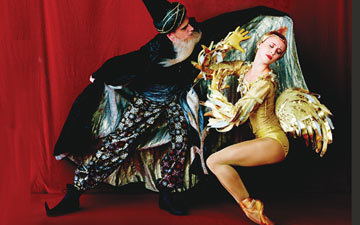