Lauren Lovette has always been a creature of the stage. Her big eyes light up, her face beams, and off she goes, apparently lost in the moment. This was true even when she was a dancer in the corps de ballet, standing on the side of the stage. It always looked as if her heart were about to jump out of her chest.

It’s hard not to feel a bit sad about the fact that this dancer retired, today, from New York City Ballet. She’s only thirty and she has been a principal for just six years. She was particularly suited to the works of Jerome Robbins and Alexei Ratmansky, both of which require a deep imagination. It’s no surprise that she is also a choreographer and American Ballet Theater will perform her ballet La Follia Variations in a few weeks during its fall season.

There was a suggestion of disappointment and unhappiness in an Instagram post she posted earlier in the day. “I am ready to be challenged in fresh ways in a place I feel more valued as an artist and inspired as a ballerina,” she wrote. If the company has somehow failed to keep her, it is truly too bad. She brings a theatricality and warmth to her roles that is rare in this company. One of the most striking things about her is the way she looks at her partners, bringing them into her world, into the illusion being created onstage.

This was true today as well, in both of the ballets she performed, Jerome Robbins’s Opus 19/The Dreamer, and Serenade. (The middle ballet was the new Amaria, a herky-jerky pas de deux for Maria Kowroski and Amar Ramasar by Mauro Bigonzetti.) As always, Lovette was deeply present, swept up in the drama of the music and the choreography. Especially in Opus 19, she seemed to glow from within.

This Robbins ballet, created for Baryshnikov, is a bit of a muddle. But it begins and ends well, with solos for the male lead, the “dreamer” of the title, set to Prokofiev’s gleaming violin melody. Today, the role was danced by Joseph Gordon, stepping in for an injured Taylor Stanley. Gordon has only danced the role a few times; today was my first glimpse. His interpretation is meditative, quiet, almost angelic. He looks as if he were floating in a dream, an inner reality. When he moves his arms, he seems to push the air, as if it were made of liquid. Lovette, gliding toward him, joined him in this netherworld, like a spirit conjured by his imagination. The fact that they are both very beautiful, and well-matched in height, added to the poetic effect. It is a shame that we will not get to see them dance together again.

It was a good choice on Lovette’s part to end her final program with Serenade. This ballet about death and resurrection, about transitions, and about traveling into the unknown, is really the perfect metaphor for an ending that is also a new beginning. Lovette has said she will not stop dancing, and she has already embarked on a choreographic career. This farewell is a moment of passage.

In Serenade, she danced the role of the “waltz girl,” the dancer who arrives late to the opening scene, and who is later consoled by a mysterious man in the “Dark Angel” section of the ballet, set to the “Élégie” from Tchaikovsky’s Serenade for Strings. As she entered, searching for her place on the stage, she looked around her, as if checking the arm position of her fellow dancers. Then, with aching slowness, she brought her hand to her brow, filling every bit of the music. Over the course of the ballet, each scene spelled out a chapter of her career: the euphoria of the waltz, the loss of the élégie, and the transformation of the ending, in which she arches her back, rising toward the light.

Tiler Peck danced the part of the “Russian girl,” full of jumps and whirlwind turns, with her astonishing amplitude and silken ease. Jovani Furlan, débuting as the Dark Angel, made a strong, focused impression, but needs time to ease into the sometimes tricky partnering.

During the bows, Lovette, released from the sweep of the music, looked small and vulnerable, happy but overcome, as the streamers fell and her fellow dancers brought bouquets. The ovation was heartfelt, and went on for a long time. 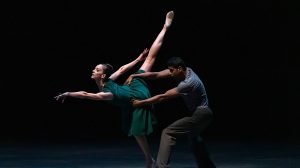