Alvin Ailey American Dance Theater are touring the UK and their first two programmes in London drew many review superlatives. I saw Programme C at Sadler’s Wells and like practically everybody else, have to rave about the dancers. Although the company is no longer exclusively black, it perhaps seems too easy to draw on black racial stereotypes of strength and sense of rhythm when talking about them – but confronted with a company that glistens with controlled power and pleasingly hits every beat, it’s really impossible not to. It’s just so wonderful to be graphically reminded of the joyous physicality of dance. The Ailey dancers are some of the very best instruments you will find.

Picking up on the company’s collective power was Aszure Barton’s Lift. It’s for a cast of nearly 20, led by the tall Jamar Roberts and rather tribal in feeling. It seems to be trying to say something, but goodness only knows what it is – the programme is punctilious to a fault in listing creatives, sponsors and commissioning funds of the various dance pieces but generally omits any mention as to the inspiration behind them. This is not good, if the web can provide some clues later. Gia Kourlas in the New York Times was at the 2013 premiere and covers the less-than-clear happenings within Lift and I rather share her overall sense of disappointment. It’s new work, hurrah, showcases the dancers physicality, hurrah again, but choreographically it doesn’t lead anywhere or tell us anything.

Robert Battle, artistic director of the company, created Awakening last year and it rather feels like his take on Rite of Spring, if to a ‘big’ score by John Mackay rather than Stravinsky. This is the power of a scared group and the movement comes much more to the fore with everybody clad in identical loose-fitting white pyjamas. It packs an awful lot into its 18 minutes (cf Rite is around 35 minutes) and Jamar Roberts is the put-down centre of attention. Even the tallest and most powerful can be as nothing to a group united. I like it that Battle looks to tell a story in 18 minutes and just about succeeds, if the choreography is pretty bombastic. Perhaps it’s too short a piece and something longer would have given room for greater light and shade?

What really came across from this quad bill is how older pieces of Ailey repertory really just sing to the audience and don’t need the support of programme notes that more modern works seem to. Alvin Ailey created Cry in 1971 as a birthday present to his mother and dedicated it to “All black women everywhere”. A 17-minute solo to 3 songs, by Alice Coltrane, Laura Nyro and Voices Of East Harlem (links to YouTube video of each: 1, 2, 3), and dressed in a white leotard top and full flowing skirt, it’s the ultimate test for a female dancer in the company. Although I never saw Judith Jamison in the role (Jamison created it) I think Linda Celeste Sims owned it outright and it’s one of the finest female performances of anything that I’ve seen in quite a while. Cry is an emotional piece, but Sims also performed it with flawless, flowing attention to detail and boundless goodwill especially in the celebratory final section. The choreography might not be stunning but it is wonderfully evocative and effective. It’s choreography that great dancers can make sparkle.

If Linda Celeste Sims in Cry made one thankful to see and celebrate such a world-class dancer then Revelations, as usual, made us all happy to be alive and celebrating the greater force of love and togetherness. All 3 programmes have included Ailey’s Revelations as a closer and its 10 songs zip by as we all rejoice together in the vagaries of life and become honorary Baptists to the closing spiritual “Rocka My Soul in the Bossom of Abraham”. No other company I know carries such baggage as performing a Revelations at most shows. But it’s baggage long may they carry and I’d have it no other way. And argue about the latest repertoire as one easily can, but seeing Alvin Ailey American Dance Theater always remains a unique and memorably uplifting experience. 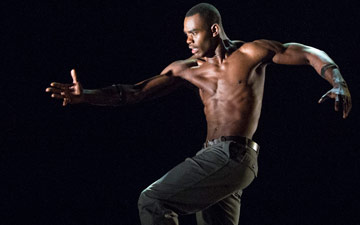 Alvin Ailey American Dance Theater – Programmes A and B – London