Alvin Ailey American Dance Theater gave two new works their West Coast premieres on Tuesday at Zellerbach Hall, the opening night of its annual residency at Cal Performances in Berkeley. Unequal in energy and opposite in effect, the programming reflected the company’s ongoing bifurcation between commercial pleasantries and more thought-provoking fare.

Ronald K. Brown’s 2015 work Open Door starred Linda Celeste Sims and guest artist Matthew Rushing, who is also Ailey’s rehearsal director, as the central couple in a vignette of Afro-Cuban samba. Four other couples enter and exit around them, and solos alternate with rhythmic ensembles and juxtaposed men’s and women’s groupings. Al Crawford’s vibrant light projections evoke an island sunset on the back wall and share their palette with Keiko Voltaire’s appealing costumes.

Open Door’s high kicks, shimmying hips and deep, West African-inspired lunge-steps surely evoke a spontaneous dance-floor samba and rich rhythms of history, while jazzy Horton-esque stag jumps and attitude turns draw a direct line back to Ailey himself. But in spite of recorded, percussion-heavy instrumentals by Luis Demetrio, Arturo O’Farrill and Tito Puente, the work flounders on the shoals of tepid pacing.

Anyone lulled into Open Door’s relaxed mood was likely jolted upright by Awakening, Robert Battle’s first new work for the company since becoming artistic director in 2011 and a Cal Performances co-commission. This futuristic take on Rite of Spring is announced by the blaring fanfare of its commissioned symphonic score by John Mackey, created with Stravinsky’s original in mind. Battle’s choreography follows suit as well, with a dozen dancers in white pounding out rhythms in syncopated lunge steps, arm whirls, hops and gestures, and huddling against a fearsome force that powers dynamic LED lights on the wall behind them.

Neutralized by Jon Taylor’s white, bell-sleeved pajamas, the dancers move as a heaving, dynamic mass. Jamar Roberts, in a role he originated, is the only one courageous enough to attempt to break free of their gravitational pull. A full head taller than the rest, he is a natural candidate for rebellion. Arching backward, curled on the ground, twitching and kicking, he ripples with emotional resonance that is hidden by the fluttering fabric, yet is palpable and potent.

Judith Jamison, Battle’s predecessor, choreographed A Case of You in 2004. The romantic adagio duet hews to Joni Mitchell’s lyrics, as sung by the smoky-voiced Diana Krall; Jamar Roberts and Jacqueline Green, both all legs and heart and loveliness, tease out the modicum of resonance that can be found in it.

As Ailey programs almost always do, this one finished with Revelations – I say almost because one of the three programs the company is presenting substitutes Rushing’s Odetta, a similar music-box suite that investigates a time and place in African-American history.

The company’s power, speed and dramatic abilities continue to dazzle, from “I Been ’Buked” to “Rocka My Soul.” Rushing made compelling casting in “I Wanna Be Ready,” about making peace with mortality. Performed by an older dancer – his is in his mid-40s – the piece becomes affectingly bittersweet.

But this performance of Revelations, a work deeply informed by Horton technique, called attention to seeming lapses in the dancers’ mastery of the style. In particular, transitions into Horton’s planar arabesques were held briefly, if at all – the effect was of casual flowing-through rather than exquisite pause. The difference may seem fractional, but these refinements make the technique, and Revelations, more dazzling – and the weight they carry is as much emotional as physical. 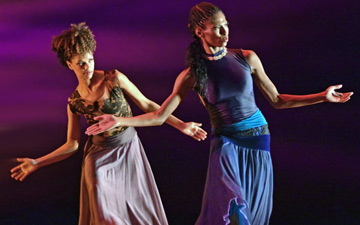