Every fall, just after Thanksgiving, Alvin Ailey American Dance Theater sets up shop at City Center, as sure a sign of the season as Christmas carols at the grocery store. And as always, Ailey’s Revelations holds pride of place. A celebration of the religiosity and community of Ailey’s childhood, it is one of those great works that simply never get old. A good performance leaves you feeling elated. Even a middling one can buoy the spirit. Tonight’s performance, accompanied by live music (hallelujah!) was one of the really good ones. The presence of real, flesh-and-blood musicians and singers makes all the difference. Jeffery Lesley and Ella Mitchell led a performance that was as sonorous and joy-filled in the pit as it was vibrant onstage. Next time, the singers should be invited to take their bows alongside the cast.

Predictably, the dancers looked more attuned to the words and spirit of the songs. (The singers’ clear diction helped, too.) In Wade in the Water, Linda Celeste Sims became a maelstrom, rolling her hips and shoulders voluptuously as she received communion in the waters of the river, represented by two ribbons of fabric in contrasting shades of blue. And in the touching pas de deux Fix Me Jesus, Sarah Daley displayed a touching fragility rendered even more eloquent by the beauty of her line. Her high extensions and limpid balances caused smatterings of applause.

But the evening was also about the new. Since taking the reins at Ailey in 2011, Robert Battle had not yet made a new work for the company, preferring to focus on expanding the repertoire with the dances of other choreographers. This season he has corrected this omission with the creation of Awakening, a dance for twelve set to two musical pieces by the American composer John Mackey (“Turning” and “The Attentions of Souls”). The score, dominated by brass and percussion, is blaring and dissonant. One crescendo builds upon the last, bringing to mind the collision of tectonic plates or the machinery of war. It’s exciting music, but at the same time, it rather forces the choreographer’s hand.

Battle’s choreography reflects the music’s feverish atmosphere. The dancers stream out, arms tautly held before them, pivoting on one leg midway across the stage to return from whence they came. Dressed uniformly in white, the men and women form lines and circles or gather together into tight clumps as if cowering from danger. Out of this mayhem emerges a leader. This part fell, as it often does, to Jamar Roberts, whose imposing size and power—and the articulateness with which he deploys them—have made him the most compelling male dancer in the company besides Matthew Rushing. Roberts has the extraordinary ability to appear simultaneously commanding and deeply vulnerable, both hero and innocent.

In the next section, he seemed to suffer a crisis, falling to the floor, shaking violently, only to rise again. A grid of lights appeared behind him, giving the dance a vaguely interstellar atmosphere. The dancers launched into a wild folk dance, forming lines and circles and crashing violently to their knees. The frenzy escalated until, somewhat abruptly, it was all over. Awakening feels like a mishmash of a lot of things: a little bit of Rite of Spring, some Martha Graham, with perhaps a pinch of Ohad Naharin (the splayed fingers and backbends, the ritualistic atmosphere). Moment by moment, it’s exciting, but in the end it leaves you feeling a little empty, wondering what all the fuss was about.

Awakening was the centerpiece of a program that included the Toccata from Talley Beatty’s 1960 work Come and Get the Beauty of it Hot (revived last season) and the pas de deux from Christopher Wheeldon’s After the Rain. Beatty’s jazzy style hasn’t sunk in, and as a result Toccata looks like a collection of undigested stylistic tics: jazz hands, high kicks, bent knees, and big, taut smiles. To be fair, Matthew Rushing sells it pretty well. As for After the Rain, it doesn’t really suit Linda Celeste Sims and Glenn Allen Sims; they power through it, looking invincible rather than vulnerable.

Nothing that a rousing Revelations can’t fix. The season will also include new works by Kyle Abraham and Ronald K. Brown and a reprise of Rennie Harris’s Exodus, from last season. So, still lots to look forward to. 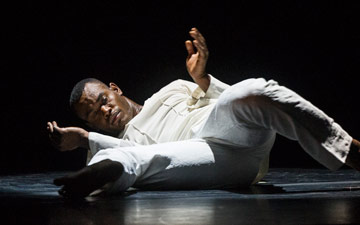