David Bintley’s two-act account of The Tempest opens, as Shakespeare’s play does, with a storm and a shipwreck. But we don’t find out who the stranded survivors are or why Prospero engineered their arrival on his island until the second act. Shakespeare lets his audience know almost at once. Prospero sits his daughter Miranda down and tells her (belatedly) how he was banished from his dukedom by his power-hungry brother with the connivance of the King of Naples. These wrong-doers are now castaways on the island, just as Prospero and his infant daughter were. The time for revenge has come.

The obvious way to impart this back-story in a ballet would be in a prologue, which is what Rudolf Nureyev did in his one-act Tempest for the Royal Ballet in 1982. Bintley, however, trusts that his audience will either know the play or read and remember the lengthy synopsis he provides. His concern is to get on with the present-day action.

The shipwreck scene is spectacular, with the sprite Ariel (Mathias Dingman) orchestrating the storm effects as he flies through the air on wires. One of the survivors, Ferdinand, the King of Naples’ son (Joseph Caley) swims upwards through the waves, also on wires. Washed ashore near Prospero’s cave, he will be the first man, other than her father, that Miranda has ever encountered.

The island’s native inhabitants are nature spirits (the corps de ballet as naiads and dryads), with the exception of Caliban (Tyrone Singleton), the semi-feral offspring of a witch. Prospero enslaves him to stop him molesting Miranda. The relationship between overbearing ruler and primitive inhabitant is a tricky one. Iain Mackay’s imperious Prospero can appear brutal; Singleton’s resentful Caliban is animalistic, easily misled, with just one solo to express his soulful appreciation of ‘his’ island.

Sally Beamish’s descriptive score has motifs for all the principal characters (Caliban’s is mostly grotesque), as well as providing an attractive range of dance genres for lovers and fools, nymphs, goddesses and merry-makers. Together with Clement Rawling’s atmospheric sound effects, the music conjures up a mythical island of ‘sounds and sweet airs that give delight and hurt not … a thousand twangling instruments’ that bemuse the disoriented castaways.

We see the scenes as if from Prospero’s cave, through a framework around the proscenium arch. The magical designs are by Rae Smith of Warhorse fame. Bruno Poet’s lighting suggests different parts of the island, though the basic set of ship’s timbers remains constant throughout. By the end of Act I, we have been introduced to Prospero and his servants, Ariel and Caliban, and seen Miranda fall head-over-heels in love with Ferdinand.  Their first pas de deux is sweetly comical as she discovers how to dance with an adoring partner.

The other lot are still cyphers or stereotypes: the king, his brother, Prospero’s brother and their nit-witted staff, Trinculo and Stephano. The latter two are supposed to be comic conspirators, along with gullible Caliban. In the play, their plan to murder Prospero runs in parallel with the aristocrats’ plan to kill the king – simply not possible to reveal in dance, so don’t even try to keep up. The first half of the ballet is overfull of characters we have yet to care about.

Act II becomes a sequence of pretexts for set piece dances. The first, an illusory banquet for the royal party, reminds them (and us) in a charade of how Prospero was usurped by his brother as Duke of Milan and set adrift with his baby daughter. The fate of his wife (Delia Matthews in a cameo role) remains a mystery, never mentioned by Shakespeare. Returning to the present, Prospero has a solo of anguished reminiscence in which the puppet baby becomes a rag doll, Miranda’s plaything. Mackay’s stern father now appears more human as he passes his nubile daughter over to Ferdinand for a lyrical, loving duet. The references to Ashton’s pas de deux for Titania and Oberon in The Dream are evident, as are Bintley’s tributes to Ashton’s fairies in his choreography for nymphs and sprites.

A masque to celebrate the young couple’s engagement brings on the corps de ballet in a number of guises. Although the entertainment is supposedly for Miranda and Ferdinand, seated at the back with Prospero, the dances are directed at the audience, complete with tableaux at the end for applause. Soloists and principals display their talents as mythical beings blessing the future marriage. The choreography is delightful, the music’s rhythms ingenious, but there is a sense of everybody in the company being given something to do.

In a tale that otherwise has only one leading female role, much is made of three goddesses, elegantly danced by Céline Gittens, Yvette Knight and Delia Matthews. After their formal appearances in the masque, they and some hounds from hell persecute the three silly conspirators. Prospero then forgoes his magic aides in order to confront his treacherous brother and the King of Naples, who believes that his son has drowned in the storm.

This is the climax of the play, in which Prospero abandons all thought of revenge and forgives his penitent enemies. Without the power of Shakespeare’s language, the big scene misfires. The royal party has been spell-bound by Ariel, their reactions frozen as Prospero breaks his magic staff and reveals who he really is. The audience responds to the long silent pause for effect by applauding as though the ballet had ended.

When music restores the nobles to their senses, the king (Michael O’Hare) begs forgiveness and is overjoyed to discover that Ferdinand is alive and happily engaged. Prospero embraces Antonio, his brother, and retrieves his ducal coronet. They set off for Milan in the ship that has been revealed in a coup de théatre, miraculously unharmed, like its crew, at the back of the set. But what of Ariel and Caliban?

Bintley has not accounted for Prospero’s relationship with them in any depth. Ariel gets plenty of action in impressive costumes but little is shown of his urgent desire for freedom. He seems an obedient servant, enjoying himself, unlike Caliban, who hates his servitude. Is he an ill-treated slave or an ungrateful monster? Both are often interpreted as dual aspects of Prospero – spirit and body, higher and lower man, in need of acknowledgement and proportion. In the last moments of the ballet, Prospero hands Caliban the ducal coronet, leaving him ruler of the abandoned island: an ambivalent farewell gift? The synopsis states that, as in the play, Ariel is set free. What we see is him is cast down, alone.

Bintley has treated Shakespeare’s drama as a masque, full of spectacle, music and dancing, with elusive characters that are more allegorical than realistic. It doesn’t work as a narrative ballet because the sub-plots are too complicated and the main characters’ motives unclear without a printed synopsis. The love story between Miranda and Ferdinand is uninvolving because it’s so swift (though Jenna Roberts is captivating in her frank innocence). The staging and performances are pleasing, tantalising in the promise of richer interpretations. Bintley is not alone in finding that The Tempest proves intractable as a ballet: plenty of choreographers have had a go without resounding success – Glen Tetley, Nureyev, Alexei Ratmansky and Crystal Pite, among others. It’s best left alone. 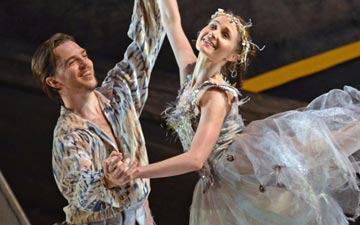