The Tempest premieres at the Birmingham Hippodrome on the 1 October 2016 and goes on to tour London, Sunderland and Plymouth. Full details

David Bintley on brewing a storm
for thirty years

This autumn, Birmingham Royal Ballet celebrates the 400th anniversary of Shakespeare’s death with an interchangeable touring programme, featuring a triple bill of works inspired by Shakespeare (Wink by Jessica Lang, José Limon’s The Moor’s Pavane and Frederick Ashton’s The Dream); and a new full-length interpretation of The Tempest by the company’s director, David Bintley CBE, which will have its world premiere at the Birmingham Hippodrome on 1 October.    Anticipating that event, Graham Watts chatted to Bintley about realising his long ambition to turn The Tempest into a ballet.

GW: This is a project that has been a long time in gestation.   When did you start planning it?

Wow! What held you up?

When did you discover that Sally [Beamish] was the right composer?

It was a bombshell.  Some time in 2012, Sally was Radio 3’s “Composer of the Week” and I loved a fantastic piece that she made for a friend of mine, John Harle (the saxophonist).   I listened to as much of her music as I could and, within a week, I knew I wanted to work with her and I knew that it was going to be The Tempest.   And, it seemed obvious to aim towards the 400th anniversary of Shakespeare’s death in 2016.  I put the idea to her soon after (I think in our second conversation) and she was really up for the challenge.

What happened next? Did she go away and prepare a score independently? Or, did you work together?

We had a year of doing very little together while I finished developing the scenario and then we began to talk in broad terms about the music.   After that, it took about two years’ to develop the score.

The scenario has to come first?

For me, the scenario needs to be pretty tight before the music is developed.  I need to identify the various musical numbers and the lengths that I think they should be.

So, Sally composed to order; to meet your tight specification?

Yes, but there’s always a certain amount of give-and-take.  I tend to allot what I think is the right timespan for each given dance; so, I’m going to give a longer time, say, to a duet or to a large corps dance.  Everything needs to be balanced within the overall shape and framework but giving priority to the most important numbers; so that I don’t get a scene d’action that is 5 minutes’ long with just a minute for a pas de deux!

Every time we came to one of those important numbers, Sally and I had a long discussion, breaking everything down and analysing what each piece has to say.  It gave me a chance to indicate – not exactly a time signature, but – a sort of mood: is it fast, slow or medium-placed?

The relationship between choreographer and composer is often fraught with difficulties.  What’s the secret to getting it right?

Every composer works in a different way and so there’s no tried and tested formula.   The completely overwhelming – and unnerving – thing with Sally is that she writes directly into full score.  It’s finished.  She won’t mind me saying that when I got the first five minutes of the first section that we worked on, she had made every mistake in the book, in terms of what one needs as a choreographer.  And, she had also written it into full score!  My first thoughts were to wonder what I would do if I didn’t like a particular bar, because it sometimes comes down to that level of detail.

Sally reassured me that she works very quickly and could make whatever changes I needed as we went along.   I don’t think that I quite believed her at the time but we carried on in that vein and I’ve got to say that from that point onwards everything she wrote, except for a few minor details and a few bigger ideas, was wonderful and excellent.  The process was challenging, but it all worked.

So, your 30 year wait for the right composer paid off?

For this particular piece, yes.  The strange thing is that, for me, this kind of wait is not unusual.  Beauty and the Beast was another idea that lay dormant for over 20 years and only came to fruition when I heard Glen Buhr’s music and it was absolutely right and called the piece to mind immediately.

I have been doing this for a long time.  I started off very young and it’s not always worked.  With the first version of Cyrano, I was not experienced enough or tough enough to grasp the nettle of what was needed.  The music just didn’t work and all we had was some great costumes and a good idea.  So, that’s when I turned to Carl [Davis] and thank goodness I saved those costumes!

Is it fair to say that you take a long time to prepare each new work?

Yes, especially with the score.   You have to prepare.  In my experience it takes two years to write a new full-length score, from scratch, with a full orchestra.   That’s just how it is.

Going all the way back to 1983, what was it that attracted you about The Tempest to want to turn it into a ballet?

We’re back to music, because the initial impetus came from Sibelius.  In 1982, I did the Swan of Tuonela, which was all choreographed to Sibelius.   One of the pieces was from the incidental music that he wrote for The Tempest and there is a lot of that music (I think about 40 minutes).  I thought, “Wow, I wonder if there is a ballet in that”.   So, I read the play, which I hadn’t been familiar with at the time.  I loved it but realised that the Sibelius – although it had led me to the play – was absolutely not the right music.   That’s when the 30 year wait began.

Other choreographic interpretations seem to be largely evocations of The Tempest.  The essence of the story and some of the characters are there but they’re not linear representations of the story.  I get the sense that you are trying to get back to Shakespeare with this production.  Is that right?

I’m surprised that there are not more danced interpretations of The Tempest.  It lends itself tremendously to dance.  Many of the recent choreographies based on the play have been Shakespeare, but not.  They’re wonderfully inventive pieces but not a straight telling of The Tempest, which I’m attempting, insofar as it is possible in dance.

It was a thrill to actually start making steps because I got so utterly sick of reading about nothing but The Tempest for the past four years, particularly, in relation to the philosophical depths that some authors and directors now take the play, although they are not actually there in Shakespeare’s text.   I won’t say that they are not explored or hinted at because I’m aware of all the different takes on The Tempest and every character in it.  But, as a choreographer, I don’t see that as being my job, which I see as to make a lyrical presentation that tells the story in terms of dance, shape and outline.   I’m not simplifying it.  I feel that I’m going back to Shakespeare before the post-colonial attitude to Caliban was even thought of.  Does that make sense?

Explain it a bit more.

It is very difficult for any director that approaches Shakespeare nowadays because there is this push to reveal things that nobody else has revealed before.  I have seen several theatrical versions of The Tempest in recent years.  Almost all have done exactly this: one was set in an Amazon Warehouse; one had a set of containers washed up on the South Coast; another production had marvellous comic actors and was played completely for laughs.

The version I liked best was Dominic Dromgoole’s recent production at the Sam Wannamaker which I thought was a wonderfully literal attempt to get back to how the play was first shown, forgetting all of all the extra political accretions that have accumulated over the years of directors trying to reveal new things.  This production concentrated on the poetry of Shakespeare and the fantasy of the piece; it made no attempt to explain why Ariel is an airy spirit; nor did it try to make Caliban the most important character because it somehow resonates with post-colonialism and contemporary race issues.  My motive has also been to get back to Shakespeare and the poetry.

I was just thinking of the Derek Jarman film while you were talking.  Was that an influence?

That’s interesting because I watched it again, just a couple of weeks’ ago.  It’s a super film.  I remember seeing it many years’ ago and looking back on it recently, I really enjoyed it all over again.  I thought that it is something that matures.  By contrast, I thought that the Julie Taymor film was a little bit “run-of-the-mill”.  Helen Mirren is a very fine actress but, for me, it upsets the play’s balance to have Prospera, not Prospero.  There is something very special about that one single, little girl (Miranda) surrounded by nothing but men; with no maternal influence at all.

Have you stripped any of the characters away?

I have taken one character away – Gonzalo.  Because his role, it seems to me, is all to do with that whole idea of civilisation and the primal kind of thing.  It is absolutely necessary in the play but I don’t think that it is needed in the ballet.  I have to be a little bit more clear-cut about allegiances – the baddies and goodies, if you know what I mean.

How about special effects?  Can we look out for a tumultuous storm?

I’m trying to integrate the storm into the production so that its effect is created by the dancers rather than by the stage hands.  Because we can’t do that great exposition by Prospero at the beginning of the play, setting the scene, we do a kind of back-story, further into the ballet.   We have a puppet for the child Miranda; we see the usurpation of Prospero’s Dukedom; and we see them being put on the boat.  And, that’s about it.  I didn’t want to have a lot of special effects because I don’t trust them!   And, I’d rather imply it through the choreography.

Prospero does magic, but it’s not tricks.  It is the psychological force that he exerts upon the people around him that indicates he has this power.  There are great set pieces, of course, like the banquet that disappears and Ariel turning into a Harpie so it will be theatrical but I’ve tried to make each event something that is not what other people do offstage but, instead, it’s in the choreography and the music.

How many casts will you have for the BRB shows?

I’ve got three casts of some characters (Ariel, Caliban, Ferdinand and Miranda) and the rest is two.  It’s really heavy with guys.  We have 21 men on stage, from a pool of 24 male dancers, so when the cast changes, everybody changes!

It’s a co-production with Houston Ballet.  When will you go and set it on their dancers?

They are due to do it six months after our premiere, so it’s scheduled for around April 2017. 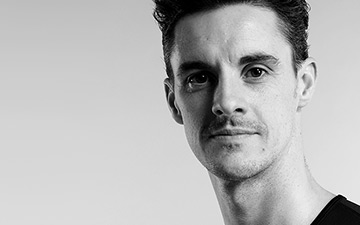 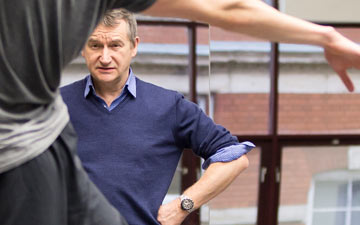 David Bintley – Director, Birmingham Royal Ballet – in his own words 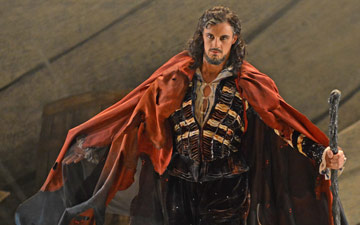