pamtanowitzdance.org
Pam Tanowitz @ The Royal Ballet: Pictures, Review of Everyone Keeps Me

Pam Tanowitz, well known in New York, just created her first work outside the States – for the Royal Ballet. It’s been a critical success and Jann Parry (who gave the work 5 stars) finds out what makes her tick and why so many directors are seeking Tanowitz out…

‘It’s taken me 25 years to become an overnight success’, says Pam Tanowitz, wrily. She had just completed her new work for the Royal Ballet, Everyone Keeps Me, her fourth commission from different companies this year. Her 2018 dance theatre creation to T.S. Eliot’s Four Quartets was performed by her own company in the Barbican Theatre in May, to critical acclaim, as it had been in the United States.

Did Kevin O’Hare, artistic director of the Royal Ballet, contact her before or after the London success of Four Quartets?  ‘Before – he got in early’, she says. ‘It’s the first time I’ve worked outside the States. He asked me for a new piece to go with the Royal Ballet’s tribute to Merce Cunningham, probably a trio like the other two’ (Cunningham’s Cross Currents and Frederick Ashton’s Monotones II). In the end, she had nine Royal Ballet dancers: ‘Three of them were meant to be covers, but they were so amazing that I put them in the piece. I never asked their rank because that didn’t interest me.’

Everyone Keeps Me was performed four times over two nights in the Linbury Theatre, as part of the Merce Cunningham Centenary celebrations. It made a beguiling conclusion to the triple bill, with references to both Cunningham and Ashton, while offering her own fresh ideas.

The music, Ted Hearne’s string quartet, Exposure, was played by members of the Royal Opera House orchestra. She uses live music whenever she can. ‘Whenever the budget allows it – I love being able to have live breathing dancers with live breathing musicians.’

Tanowitz is emphatic that she is a modern dance choreographer, even though she has previously worked with dancers from New York City Ballet, Miami City Ballet and Dance Theatre of Harlem. ‘Something I’ve learnt from working with ballet companies is that they have a very specific environment, a culture in which I’m a guest. I come in as an outsider, but I’m here to collaborate with them – I’m not imposing myself. Their history, their training will come through, while I ask them to use their bodies differently. I ask them to look at each other as people, instead of projecting to the audience.’

She draws on Cunningham technique as the basis for her choreography: ‘Clean lines, fast footwork, the flexible use of the torso – but I also love Twyla Tharp, Paul Taylor, Mark Morris. They all provide tools for the material you already have, all those moves you can assemble like swatches of fabric. And the dancers give me choices I can play with, and then push them a little bit off, to stretch what dance can do.’

Tanowitz started her career by studying dance at Ohio State University before becoming a graduate student at Sarah Lawrence College in New York. There her tutor was Viola Farber, the performer and choreographer who had been an early member of Merce Cunningham’s company before starting her own. ‘Viola encouraged creativity and imagination. She retaught me to think of dance in a different way. I’ve always performed my own stuff – I didn’t see any point in auditioning for anyone else because I wanted to create, not perform their choreography.’

Maybe that’s why it took so long for Tanowitz’s talent to be recognised, she thinks.  “Where did she come from?” people would ask because I’d never been in a company.’ It took many years for her work to be reviewed and acclaimed. ‘In some ways, it was an advantage’, she reckons. ‘I had such a low profile in New York that I could fail small and fail big without having to worry about ticket sales. That way, I could see what to work on for my next piece. I’ve had to make my own opportunities for so much of my career that it’s great they’re now calling me. I’m 49, so I’m ready.’

There’s an impressive list of her commissions and awards in the programme booklet for the Linbury Theatre programme. Her ‘overnight’ renown came partly as a result of a rave review of Four Quartets by Alastair Macaulay in The New York Times in July 2018, calling it probably ‘the greatest creation of dance theatre so far this century’. ‘It helped with people noticing me’, she acknowledges, ‘but I have to keep an even keel with reviews. There’ll be new people coming along to be flavour of the month’. She adds without bitterness: ‘This is an art form of humiliation, based on rejection.’

While making her way as a choreographer, Tanowitz did a variety of jobs to earn money. ‘One of my first jobs was to pour coffee for New York City Ballet donors during the intermissions, so I got to watch a lot of Balanchine for free. I worked in the admin. office at City Centre for 12 years, so I saw tons of work by Alvin Ailey, Paul Taylor, American Ballet Theatre, all the companies that performed there. I’d go all the time to the Performing Arts Library in New York to watch recordings of performances and read up about them. It was all research of what other choreographers had done – you need to know as much as you can.’

Choreographer Pam Tanowitz on her new work 'Everyone keeps me'

💃 'It's always going to be about the people in the room'

Choreographer Pam Tanowitz discusses her new ballet 'Everyone keeps me' which is part of The Royal Ballet's new triple bill, opening next week 🌟

She formed her own company, Pam Tanowitz Dance, in 2000. ‘It’s project based, not full time. I hire the same dancers because I want stability to explore dance making but the burden of running a company can be too much, unless you have your own building, like Mark Morris does. There has to be a way of building a company without all the costly infrastructure – a lot of people are trying to find a way in difficult times.’

The one thing she won’t do is set out to please an audience. ‘How can you make a piece of art that everyone likes? You have to be true to yourself. Audiences will come with you if you up the ante a little bit, even if they don’t get it at first. You have to trust them – they’re not stupid’.

She made a work for New York City Ballet in spring this year to music by Bartok that challenged audiences (and no doubt coffee-drinking donors). Bartok’s String Quartet no 5 is not an easy listen and she was asking female dancers to use pointe work in unusual ways. Reviews were mixed, but she has been commissioned to make another work for NYCB in spring 2020. ‘I’m going to use music by Ed Hearne but it’s a different piece from the one for Everyone Keeps Me. Maybe I’ll try out more ideas for pointe work  – we’ll see.’

The dancers in Everyone Keeps Me wore soft ballet shoes, though she rehearsed them in bare feet initially. ‘It was important for them to learn my movement barefoot so they could connect to the floor. Cunningham always wanted bare feet. I had them wear soft shoes so that my piece fitted in the middle between his Cross Currents and Ashton’s pointe work for the woman in Monotones. Sometimes we rehearsed in silence before including the music. I liked to see how they responded to the music and shaped the choreography accordingly. I left in mishaps that occurred during the process. That way, the piece belongs to them.’

It must surely be seen again after its brief exposure on the Linbury stage. Everyone Keeps Me is a keeper, perhaps a forerunner of another commission for the Royal Ballet – if Pam Tanowitz can find a place in her busy schedule. 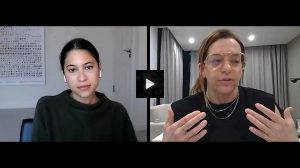 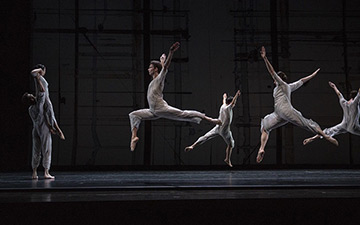 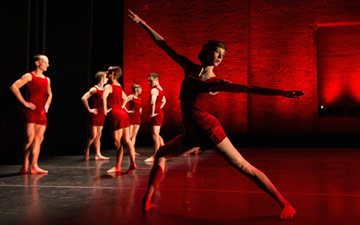