The French have an uncanny ability, and desire, to make dreams come to life, particularly in the realm of the circus arts. Yoann Bourgeois and his micro-troupe of talented artists took audiences on a dreamy ride last week during his sold-out Next Wave residency at BAM Fisher.

Bourgeois, like many of his peers in the acrobatic, circus and dance arts, has a thing for gravity, a desire to play with it, defy it, challenge it and utilize it. His training includes working with Alexandre Del Perugia (a former co-director of Centre National des Arts du Cirque and frequent movement tutor to film stars), Kitsou Dubois (another gravity-defying choreographer) and he was a member of the Maguy Marin company.

In Minuit, the stage is set with a few apparatus: a staircase, a trampoline, some metal tubes/pipes hanging from the ceiling, a few chairs and a mysterious, rather tall sculpture-like fixture with weights at its base. A musician, Laure Brisa, sits perched atop a platform above the stairs stage left, with her beautiful harp and her various items of musical kit. The action begins with Brise, gently plucking the strings. She moves on from plucking to using different bows, and records the different sections to create an overlapping and rather haunting soundscape. Frequently, the music is as beautiful as it is chilling, reminiscent of a rheumatic musical automaton.

Bourgeois walks up to a microphone and tries to speak, the microphone – articulated with multiple hinges – collapses with barely so much as a whisper. Bourgeois’ attempts to speak, using the microphone, become a running joke throughout the hour long work, and each time the microphone is placed in increasingly challenging positions. He finally triumphs on what appears to be the most difficult version of the stunt, the mic on a large square wooden platform, sitting atop a large rubber yoga ball.

In addition to Brise, Bourgeois’ collaborators are Marie Fonte and Jörg Müller, who subsequently take the stage. Fonte is strapped into a harness and floats, hovering just above the floor of the stage, staring blankly out into the audience. After she alights, Müller – touted by some as the inventor of “pendulum juggling” – begins his extraordinary piece “Mobile,” a now seminal work of contemporary juggling.

A graduate of the National des Arts du Cirque, Müller’s first performances of “Mobile” began in the mid-1990s and comes in many iterations, including a version with flames. On stage at BAM, Müller first sends the pipes swinging around Fonte with some centrifugal force. Each of his index fingers is swathed in a metal sheath, and as he touches the tubes they make a gentle, whisper of a sound. Their bodies begin “inside” the circle of pipes and weave outside, Müller runs after them and eventually sits inside them, playing them more pronouncedly. The careful calibration of the momentum he gives them, the wires they dangle from, the beauty of the pipes weaving in and out of each other is an astonishing manipulation of physics – this is juggling as you have never seen it, as lateral and horizontal as it is spherical. Müller can even send the pipes weaving – much like one would braid the hair, the pipes move over, under and around each other – while simultaneously sending them around in a circle. The brave souls in the front row gasped as Müller sent the pipes swinging away from him with unprecedented force. The pipes always move exactly where he wants them, and it becomes a ballet of sorts, a ballet of physics. Anyone who really wants to try to do it themselves, can consult Müller’s manual on his website. Attempt at your own risk.

“La Balance de Lévité/Levitating Scales,” is another vignette based on fine-tuned physical precision. Fonte slides into a seat at the apex of an extremely tall, two legged metal apparatus with weights at the base of each leg. With careful, quiet and slight movements of her body, Fonte sends herself swirling around in space, the instrument weighted perfectly to match her body and enable movement. The quiet pace and gentleness of it is parallels visions of astronauts in space, but Fonte’s balletic use of the “ride” transforms it into a solo of suspension, a floating dream realized.

The pièce de résistance was Bourgeois’ “Fugue/Trampoline.” Accompanied by Philip Glass’s moody “Metamorphosis Two” performed by Brisa on the harp, “Fugue/Trampoline” and its iterations, is perhaps what Bourgeois is most famous for. Using a nine-step staircase and a trampoline, Bourgeois resists and submits to gravity, creating a breathtaking, balletic spectacle. Beginning with a limp, careless-looking slump of his body onto the trampoline, Bourgeois’ body bounds back up to the wooden platform with the softest elegance. He repeats the exercise, embracing gravity with different strokes, hurtling, spinning or curling into a fall. When returning to the platform or a step, he always lands on his feet, more often than not regaining his vertical balance with a single foot, or just his toes. At BAM he wore an unzipped cardigan which spiraled around his body, tracing the centrifugal motion and amplifying the visual sense of flight.

“Fugue” builds from Bourgeois’ initial bounds between the trampoline and its platform to the challenge of the stairs. He walks up one step, falls of it, bounds back to the low step, and keeps climbing, and falling off and bouncing back to higher and higher steps. From one fall he can bound back to the third, fourth, fifth, even the top stair which is a few feet taller than he is. “Fugue” is as heartstopping as it is hypnotic.

A sense of risk and fatality looms over “Fugue” when seen live as compared with watching at home on YouTube, which can be mesmerizing and freeing, but above all safe. Live, the audience response is rapt: people gasp, clasp their chests, cover their eyes as if they are watching someone teetering on the ledge of a building, unsure if he’ll make it back to the step, gasping when he allows his body to fall from the highest stair, and miraculously perches atop it. The aesthetic is the opposite of – though has some technical overlap with – some aspects of parkour (which has French origins). There are flips and there is a version of wall running, but parkour’s risky endeavors are typically executed in a concrete jungle, no trampoline in sight, with a purposeful, daredevil manner and hard vitality. Bourgeois takes it in the other direction.

The nonchalance with which Bourgeois throws his body around has a melancholic, futile air. Although every other step, when he is vertical again, is a triumph, and his body relishes the moment, he quickly succumbs to the seduction of gravity, and unlike the parkour addicts, his body takes on an eerie softness. The trampoline allows Bourgeois to show the truth of the body under the governance of gravity, mirroring the reality of anybody falling off the side of any building – and we all know the end result of that. Bourgeois’ loose limbs haunt “Fugue” with a sense of corporeal frailty, creating a sense of cognitive dissonance which enables the work to achieve an uncanny, surreal dream state. Bourgeois’ weightlessness can make you weep. The work ends, in fact, with his body slumped facedown on the ground – the end of our falling dreams which we never see, because we usually wake up before we hit bottom.

Minuit is an episodic trip into an alternate reality which adroitly uses physics as its foundation. The very brief moments of Keaton-esque comedy were few and far between, lacking the rich humanity and humor which colored Camille Boitel’s no less precise and articulated spectacle L’Immediat. Minuit is not without a few laughs but the work is spacious, refined and at times almost sterile. But Minuit is more of a meditation on the elegance of physical reality and how it can be manipulated in the name of artifice. And what beautiful art it is. 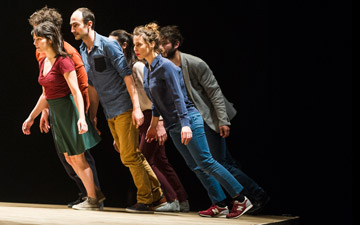 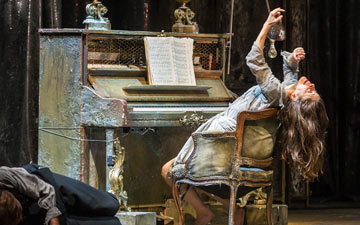 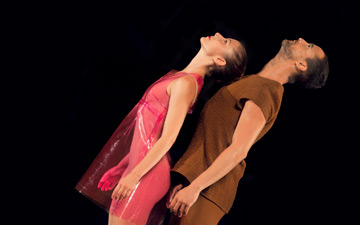