Smashed provided a savagely comic start to the 40th anniversary edition of the London International Mime Festival – mime meaning anything its participants want it to. Sean Gandini, who co-founded the company with Kati Yla-Hokkala in 1992, regularly collaborates with dance choreographers. For Smashed, he and Kati turned to the work of Pina Bausch when they were commissioned to create a short outdoor piece in 2010. Since then, a longer indoor version has been performed over 500 times all over the place (including the Linbury Studio Theatre in 2012).

The ‘special edition’ of Smashed included an expanded cast (22 performers instead of 9) and two extra numbers contributed by Dominique Mercy, co-director of Tanztheater Wuppertal since Bausch’s death in 2009. The 70-minute show starts and ends with a typically Bauschian parade of formally dressed performers smiling knowingly at the audience as they side-step to cheesy music. Instead of a hand-jive, they juggle apples in perfect unison: Bausch with added balls.

The advantage of apples is that they are pregnant with meaning, edible and smashable. Rhythmic juggling is impressively beautiful. It can be amiably conversational between two or more pairs of hands, flirtatious, witty or threatening.  Ensemble routines give way to solo turns, social encounters, alliances or hostile invasions of private space. The tone is set by the choice of music for each sequence, most of it popular songs from a past era, inter-mixed with Bach, Mozart and Vivaldi.

The extra numbers of ‘guest artists’, almost all men, create a big gender imbalance. They gang up on the women, pawing at them as they juggle over and under them. They prevent Yla-Hokkala from completing her multiple-apple routine by crowding around her, hanging onto her hands as they keep the apples flying.  She and Kim Huynh display sisterly solidarity to ‘Stand By Your Man’, but also submit to a masochistic crawl on all fours, apples in their mouths, while men roll apples along their backs. More women appear, to be arranged, legs crossed, on chairs while they and the cast lip-synch to a Charles Aznavour song. A Harry Belafonte calypso requires a mass of chairs to be rearranged (echoes of Bausch’s Café Muller) until the cast settle down to watch a man juggling frantically with a baton.

He is a pain, showing off while annoying those who join in, deliberately disrupting their co-ordination until their apples crash to the ground – all this to the Ink Spots singing ‘That Cat is High’.  He’s not sorry, but two other men are, having their bottoms slapped by two women, while juggling, to Brenda Lee’s apologetic 1960s song. Polite sado-masochism gives way to anarchy after a mezzo-soprano, Emma Carrington, arrives with a string quartet to sing a Vivaldi aria. High culture is contrasted with increasingly cruel, silly and hysterical behaviour by the cast en masse.

The audience laughs at the riotous behaviour as crockery and fruit crash all over the stage. These are the shards of a civilisation being ground underfoot as crowd power takes over, abandoning the expertise of juggling in favour of wanton destruction. Even more disturbing is the final parade, back to unison stepping to a Second World War song, ‘ I Always Wanted to Waltz in Berlin’. Pina Bausch was a child of WWII in Germany, and Gandini’s tribute to her in Smashed is a spine-chilling warning, not nearly as funny as it seemed at the start. 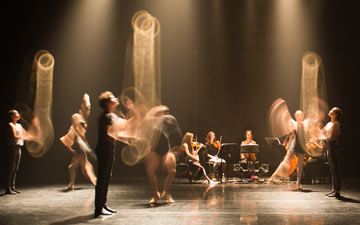 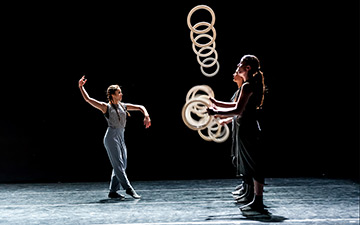 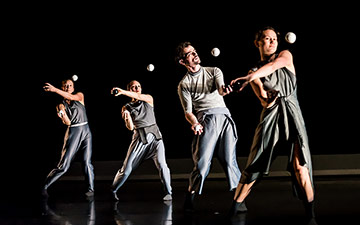