Les Enfants Terribles is the third in a trilogy of operas Philip Glass based on films of Jean Cocteau’s work. Glass had been obsessed by the films when he watched them in New York in the 1950s, before he went to Paris to study music under Nadia Boulanger. Decades later, he used the film scripts as the libretto for each opera.

Herein lies the first challenge for a director and audience.  The text of Les Enfants Terribles (sung in French and spoken in English) is spare. The characters are often not saying what they really mean. The music is not going to help, since it is not necessarily related to the words or actions. So dance comes in to supply additional layers of meaning. Glass composed the opera in 1996 with the American choreographer Susan Marshall, whose dancers served as doubles for the cast of four singers.

Javier de Frutos, director and choreographer for the Barbican production celebrating Glass’s 80th birthday, has further amplified the number of dancers: four from the Royal Ballet, the other four independent artists. The two protagonists, Lise and Paul (the deviant siblings of the title) have numerous alter egos, often doing different things at the same time. There is an overload of visual information to absorb, in addition to videos by Tal Rosner and English surtitles above the proscenium arch.

De Frutos’s justification for this amount of layering is to expose what might be going on in the characters’ hearts and minds. He makes explicit what Cocteau could only imply: the secret game that binds the brother and sister together is incest. In the opera libretto, the game is so down-played that it is mystifying: sister and brother bicker unpleasantly until one of them (usually Paul) cracks into a furious sulk. It is up to the dancers to reveal their secret language of lustful provocation, making clear the power-play between them.

De Frutos has contributed a prologue in silence in which Zenaida Yanowsky and Jonathan Goddard, as Lise and Paul, share a bath as youngsters. Their play is not as innocent as it seems. Their excited giggles are echoed by other dancers scampering in the snow outside, dressed as Parisian school-children. One throws a snowball with a stone in it at Paul, who is then bed-ridden, house bound with Lise and their dying mother. Jennifer Davis as Lise sings her irritation at being both their carers. No wonder she feels claustrophobic with four other Lises in the bathroom with her and Paul (the singer is Gyula Nagy).

Edward Watson as Paul and Gemma Nixon as Lise grope each other lubriciously as the singers argue and flounce.  The opera singers’ movements are choreographed, their dialogue sung with conviction. The tempi are conversational, sometimes hard to follow. Glass’s score for three pianos ripples repetitively, thickening into dissonance when tensions mount, but never evoking emotional states. The dancers follow their own rhythms, interacting with each other as they negotiate their way round bath and beds, or run up and down a series of staircases.

Jean-Marc Puissant’s set is constantly on the move, its changes of location illustrated by Rosner’s video projections.  Some are realistic, others surreal: a startling multiplicity of eyeballs at one point resembles tadpoles in frogspawn. Puissant’s versatile costumes suit singers and dancers alike, identifying characters and their avatars. He has designed a spectacular ball-gown for Yanowsky, when she, as Lise, eventually gets a job as a model in a fashion house and befriends another model, Agathe (sung by Emily Edmonds).

Mother has conveniently died, releasing Lise into the outside world. De Frutos supplies a perfunctory funeral for this non-event, complete with sobs and giggles. The siblings’ secret world is about to fracture as outsiders are introduced into their private domain. We have already met their only friend, the narrator, Gérard (Paul Curievici, an excellent actor as well as singer).  Now Lise brings Agathe home; singer Edmonds is shadowed by just one dancer, Clemmie Sveeas, because Agathe is a relatively uncomplicated character.

Lise then meets and marries a rich businessman, Michael. To surprisingly lyrical music, their romance is enacted wordlessly on two video projections, with Sveeas and Goddard as happy as can be. But Michael is wiped out in a car crash, leaving his house and fortune to Lise. Yanowsky comes to the fore as the grieving widow, while singing Lise plots to destroy Paul’s relationship with Agathe.

The story line becomes as labyrinthine as the ribbons of tape that criss-cross Paul’s bedroom. He has apparently constructed a bunker within the spacious new house. Nagy, as singer Paul, is an unattractive figure, lurking morosely on his bed in pyjamas, long hair lank on his shoulders. Watson as his principal avatar is lean and lithe, partnering Yanowsky as intimately as if they were two halves of a single being.

Plangent pianos keep stopping and re-starting repeated phrases as Paul pens a letter declaring his love for Agathe. Lise makes sure it isn’t delivered and sets up Agathe with Gérard.  Wickedly, de Frutos assembles a Last Supper with Christ-like Paul in his bathtub in the centre, flanked by 11 figures. The dramatic ending follows swiftly as all is revealed – and the three pianists lift their fingers off the keys. (On the first night they were Kate Shipway, James Hendry and Robert Clark, conducted by Timothy Burke.)

By the conclusion, the congestion of figures on stage has become totally bewildering, the plot preposterous. De Frutos and the performers have contributed so many alternative interpretations of what Cocteau may have intended that this first-time spectator’s reactions had fused, overcharged by Glass’s insistent score.

If you saw the ROH Insight programme about Les Enfants Terribles, either live or online, you would have seen how de Frutos set about combining dancers, singers and music in one of the final sequences. What each individual was doing was fascinating, as was the way their movements were dovetailed into the action around the beds and bath. Here was a cast of remarkable dancers and gifted singers (from the ROH Jette Parker Young Artist scheme) collaborating to realise de Frutos’s poetic vision of Cocteau’s fantasy. Glass kept his operatic version pared down. Too much information in this production made the experience unassimilable. 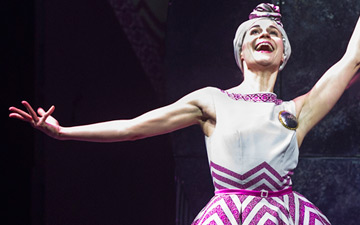 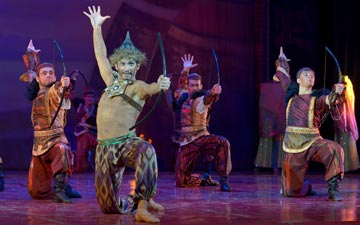