There’s often a push and pull at the heart of Eva Yerbabuena’s shows, between her intense, introspective style as a dancer and her desire to put on a spectacle of big ideas. Apariencias is another classic example – a 90-minute piece that at times seems almost baroque in its grand-scale intentions, but touches the sublime only when the decks are cleared and its star works with nothing more than the guitar-playing of her husband, Paco Jarana.

Admittedly, La Yerbabuena makes a striking entrance, in a fuchsia and black dress, with her hair covered by a latex bald cap. Spotlit, she and her bare-torsoed male dancers are consumed by a frenetic African-style drumbeat, like a high priestess and her acolytes, while the Guinea-Bissau singer Alana Sinkey adds silvery Portuguese vocals.

Very soon, however, we’re into a segment where another “bald” female dancer (Maise Pérez) in a full-length Mondrian-style dress is wandering about, there’s a male dancer having alternating images of refugees and piles of cash projected on to his white skirt before he assumes a crucifixion pose, and the flamenco singers are bellowing with religious fervour about the evils of money. It’s so Catholic you can almost smell the incense – it’s also bewildering.

The show is divided into six segments that feel like short poems, each looking to explore a different idea about identity and appearance. “What role do I play in my life?” asks one dancer, wearing masks on the back of his head, knee, hand and feet. “To join with the root is not to bury yourself,” says Yerbabuena at another point (there’s no translation offered for non-Spanish speakers, mind). Masks also feature in a stunning section where Yerbabuena whips up a storm whirling a huge golden shawl and making a space to emphasise her fierce and extraordinary footwork. Buoyed in this beautiful, physically demanding routine by Jarana’s accompaniment, she creates something truly hypnotic.

Her male dancers get their own time in the spotlight – and the imposing figure of Christian Lozano shines especially brightly, in one segment dancing a solo in what looks like a blue velvet dress and demonstrating the most captivatingly expressive arm movements.

But it’s Eva we’re dying to see and the climactic soleá – her speciality – is worth the wait. With Jarana, the two singers and a cajón in the shadows around her, she slips into another realm, her passion for the dance reaching into her very fingertips. She seems to be responding to an invisible presence, in one moment beseeching, in the next demanding and defiant. And her mastery is such that even as the music builds to a frenzy, she can hold all 5ft of herself erect and move with an imperious slow motion that holds you completely in her thrall. 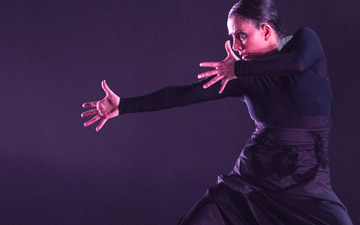