Six Performances That Stayed with Me in 2017

Why six? No reason. But here, in no particular order, are the performances I’m still dreaming about as the year draws to a close:

It was the sleeper of the spring, and I’m sad to report that not enough people got to see it. I hope it has a second life somewhere, because this may be the single most surprising, curious, original work I saw all year. Williams is a dancer, puppeteer, and choreographer. He has worked with Basil Twist for years, most recently as the sacrificial victim in Twist’s version of The Rite of Spring.

In Il Giardino d’Amore, he turned a pretty but anemic serenata by Alessandro Scarlatti, based on the story of Venus and Adonis, into an hour of mystery and enchantment. The dancing was lyrical, androgynous, archaic-looking. The musicality surprising. And the costumes, inspired by Roman and Greek art, strange and beautiful.

Here’s a piece I did on the show for the New York Times.

2. Layla and Majnun, by Mark Morris

Morris’s danced opera was most of all a musical experience. Here, the singers – two famous Azerbajani specialists in the semi-improvised musical form known as mugham – sat centerstage, surrounded by musicians from the Silk Road Ensemble, as the dancers moved all around them. Alim Qasimov and Fargana Qasimova, father and daughter, spun gorgeous, ecstatic arabesques of sound with their voices. It is a tale full of longing; two young people desire each but cannot be together, because their parents disapprove, as in Romeo and Juliet. Like the young lovers from Verona, they perish. Except that here, through death they achieve a kind of immortality and oneness with God, a Sufi idea. As the music winds down, the dancers carry off two candles, the last embers of the lovers’ passion.

I wrote about the production, and about the history of the story of Layla and Majnun, for the Times.

No other choreographer I know binds frustration to elation quite like Anne Teresa de Keersmaker. Keersmaeker is not an easy choreographer to embrace. Her recent work A Love Supreme, made in collaboration with the younger choreographer Salva Sanchis and performed at New York Live Arts in September, begins in silence. A man ambles casually from the wings and does, well, very little for about ten minutes. And then, just as you want to tear out your hair, or scream, or at the very least leave, John Coltrane’s music rushes in, like a wave of pure, unadulterated dopamine. For the next half hour, four men proceed to dance their way through Coltrane’s magnificent album, partly improvising while hewing closely to the structure and dynamics of the music. Each man “embodies” an instrument. A swish of the hand becomes the reverberation of the bass, a full body-ripple the swoop and swell of Coltrane’s sax. The marriage of movement and sound is complete – for the duration of the piece, music takes on the weight of muscle and sinew and bodies radiate melody, rhythm and counterpoint.

I reviewed A Love Supreme for DanceTabs.

Whipped Cream reminds us that art doesn’t need to be serious to be deep. This work is a confection constructed out of pure fantasy, but behind that fantasy, what skill and sense of style! And that goes not only for Ratmansky’s choreography but also for the designs, by the pop surrealist Mark Ryden. And for Richard Strauss’s much-maligned score, which this ballet vindicates in all its woozy Viennese opulence. The whole ballet is like a fever dream, in which cakes and flowers dance, a champagne bottle teams up with vodka and gin in order to conquer a hospital-full of needle-wielding nurses, and a princess made of praline takes the initiative in planting a kiss on her cavalier. Meanwhile, the dances unfurl, a cornucopia of steps, detailed, witty, lushly three-dimensional. I can’t wait to see it again.

My review for DanceTabs is here.

And here is a little radio feature for WNYC.

These were two separate performances of Cunningham’s 1975 work, both of which happened to fall in the same calendar year. Ballet de Lorraine performed the piece in February as part of an otherwise lackluster triple bill. Then, during the summer, the Cunningham Trust organized a workshop performance for young dancers at New York City Center. Both were riveting. The work is a seventeen-minute tour de force of movement, spatial organization, dizzying patterns, and energy. You feel, afterwards, as if you had seen a hundred dances packed into one. In each case, the dancers rose to the occasion. It was a welcome reminder of the riveting intelligence of Cunningham’s dances.

I wrote about the Trust’s workshop, led by Meg Harper and Jean Freebury, for The New Yorker.

And I also reviewed the Ballet de Lorraine performance for DanceTabs.

When I heard about Lincoln Center Festival’s all-star Jewels, featuring the Paris Opera, the Bolshoi, and New York City Ballet, I thought, “what a gimmick.” How wrong I was! It turned out to be an inspired idea, on so many levels. (It also turned out to be the Festival’s swan song, alas.) Each of the ballet’s three constituent parts (Emeralds, Rubies, and Diamonds) was performed by a different company. The contrast of styles revealed new aspects of the ballets I hadn’t noticed before. It was especially fascinating to see the Bolshoi and City Ballet alternate in Diamonds. A ballet faceoff! Each company has its own approach – each made the ballet feel new. Olga Smirnova’s interpretation of the central pas de deux, created for Suzanne Farrell, was magical, ethereal. Sara Mearn’s was fierce, needy. I would never be able to choose one over the other. Fascinating, too, to see Dorothée Gilbert’s début in Violette Verdy’s role in Emeralds. And kudos to the New York City Ballet orchestra, under Andrew Litton, which sounded better than I’ve ever heard it.

It was the event of the summer. May 2018 bring many more such treasures!

My feature on Jewels for the Times is here. And my review, for DanceTabs, is here. 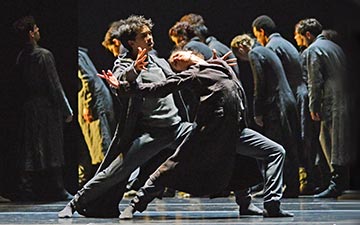