The San Francisco/Bay Area has its fair share of holiday dance traditions – numerous Nutcrackers (including SF Ballet and Oakland Ballet), ODC/Dance’s The Velveteen Rabbit, as well as revues and cabarets that return each December. Smuin Contemporary American Ballet’s long running The Christmas Ballet has been part of this picture for close to two decades, with its salute to the season. As has been the custom in the past few years, Smuin toured 2017’s edition to various Bay Area locations, and has now arrived at San Francisco’s Yerba Buena Center for the Arts for the last leg of its jolly run.

Organized into two halves (Classical Christmas and Cool Christmas), The Christmas Ballet offers a series of short, individual dances, varying in style and genre. Every year, the Smuin team, led by Artistic Director Celia Fushille, selects which vignettes from the show’s vast catalogue will be part of the festive program. Some favorites are always present, some disappear for a while, then pop up again after a hiatus and a few new dances usually join the line-up too. This year’s program boasted twenty-nine different dances, most of which were choreographed by Smuin’s founder, the late Michael Smuin.

Smuin’s Magnificat welcomed the company to the stage, framed on the sides by white draped bunting and at the back, by a star-lit cyclorama. Fitting with J.S. Bach’s rousing fanfare, Magnificat features buoyant, suspended grand allegro jumps, Mengjun Chen’s jeté entrelaces being particularly potent. Nicole Haskins riveted, once again, in Smuin’s Zither Carol with her formidable, living balances on pointe and her attention to transitional spaces – in just a few short years, it feels like Haskins has claimed Zither Carol as her variation. And of course, there was that familiar moment when the women of the company come on stage, holding hands for Smuin’s Veni, Veni Emmanuel. A reflective meditation, they slowly walk in courtly patterns; so simple and yet so powerful.

Choreographer-in-Residence Amy Seiwert had several dances in the program, one of which was a world premiere. Christmas Concerto, set to a score by Antonio Vivaldi, had a strong music/movement connection. One of the few full ensemble pieces, Seiwert met the staccato pulse of the music with delicate batterie and petit allegro, and the expansive phrases with vast shapes and postures. We Three Kings, choreographed for three couples by company artist Rex Wheeler, had some impressive unison partnering. And I was thrilled to see Smuin’s The Gloucestershire Wassail again, with its quiet arms, percussive footwork and social dance formations.

I didn’t time the dances, but I’m guessing each one was around two or three minutes. A short duration can present a compositional challenge, specifically when too much choreographic material is packed in. This was the case for some of the dances in Act I (and a few in Act II).

After a brief overture, Act II gets going in earnest with the full cast in Smuin’s Christmas in New Orleans. While suave and sexy, this vignette is kind of a slow start to the Cool Christmas collection, in which the stage and costumes shift from white to red. Erica Felsch and the men of the company gave a spirited rendition of Smuin’s Santa Baby, its Fosse-inspired jazz and fun oversized props. To my delight, this year’s second act was percussive dance heavy with three different rhythmic offerings. And the joy here is not only in the choreography, but the realization that so many in the company are incredibly talented and accomplished percussive dancers. They don’t just put on the shoes, they have the chops. Droopy Little Christmas Tree takes its structural foundation from the double step-rock-step of the waltz clog, while Bells of Dublin, performed by guest artist and former Smuin company member Shannon Hurlburt, astonishes with its lightning-fast footwork patterns. Hurlburt ends his solo in a dynamic toe stand, and the audience appropriately erupted in wild applause. Hurlburt also had a choreographic credit on the program with Rudolph the Red-Nosed Reindeer, a tap duet by Tessa Barbour and Valerie Harmon. Here was old-school tap vocabulary at its best – back walks, wings, cramp roll turns and triple stomp time steps with half breaks.

I’ve seen The Christmas Ballet five times over the years and it has always been and continues to be a lovely, celebratory afternoon or evening at the theatre. That said, I still struggle with the format. I like the variety of dances and how the company moves through them so quickly. If something’s not quite for you, there will be a new piece on the stage before long. At the same time, when there is a total blackout between almost every short scene, it creates a halted, stop and start feel. Some transitional connective tissue could be an interesting addition.

Smuin’s The Christmas Ballet continues its holiday run until December 24th at Yerba Buena Center for the Arts. 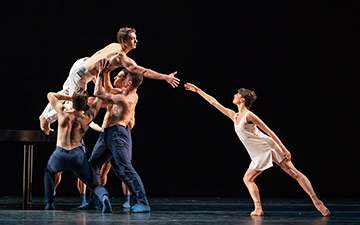 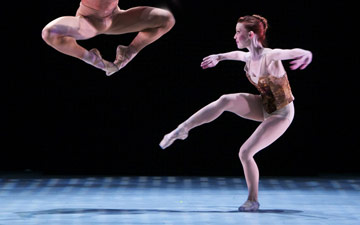