An unmistakable sense of occasion filled Lesher Center for the Arts on Friday evening, as Smuin Contemporary Ballet returned to Bay Area stages for its 2018/2019 season. Opening a new season always carries a measure of excitement, but this year the company is celebrating something extra special – their 25th anniversary. As the lights rose on Dance Series 01, a mixed repertory bill with a whopping six ballets, this commemorative season was off and running. And it was a winning first program, one with the range and breadth that Smuin is famous for. There were historic work and newer compositions; raw narrative depth and pure entertainment; classical ballet, contemporary choreography and old-school jazz influences. If Dance Series 01 is any indication of what lies ahead over the next ten months, Smuin’s twenty-fifth year is going to be a banner one.

Covering six ballets in just over two hours meant that the program progressed at a nice tempo. It also meant that none of the ballets was very long; if something wasn’t your speed, a new work wouldn’t be too far off. Fittingly, the night began with two contrasting dances by the company’s late founder, Michael Smuin, Schubert Scherzo (2007) and The Eternal Idol (1969). Scherzo was for the classicists in the room – a work for five couples that paired traditional ballet vocabulary to Schubert’s elegant Symphony in C Major. Scherzo didn’t seek to tell a story nor send any deep messages. It didn’t ask the viewer to contemplate their mortality nor consider human behaviour. It was simply an opportunity to enjoy beautiful choreography, danced beautifully and set to beautiful music. Frankly, I find that refreshing. From foundational positions of the body to courtly partnering to bravado jumping phrases, Scherzo highlighted the breadth of ballet syntax. At the same time, it explored how these balletic elements could converse with motifs in the score. A leap would be perfectly timed to correspond with the apex of a musical crescendo and, as chords resolved at cadence points, the hands would swish in a subtle ‘ta-da’ motion. Minimal frills kept the focus rightly on the movement and music. The stage was bare save for some draped silver bunting and the dancers wore simple costumes in crisp white.

If Scherzo was a homage to classicism, Smuin’s The Eternal Idol was all about aesthetics. The oldest piece on the program (and also the only one of the six that I had seen before), Idol takes its inspiration from the world of sculpture, more specifically from Rodin. Specific Rodin works are mirrored in the ballet. But there is more to this contemporary duet, more than choreographic renderings of particular sculptures. If you peel the layers, you can see that Idol is a lens into the artistic practice of sculpture itself. Impeccably danced at this performance by Erica Felsch and Peter Kurta, the duet explores the different ways two bodies can relate to each other in space. What visuals are possible when two figures are far apart or right next to each other? What three-dimensional shapes can be carved out when they are entwined? Idol also plays with different perspectives and facings. How does an arabesque change when it is viewed directly from the front versus crossed at an angle? And lastly, with that eye toward sculptural practice, Idol mined both straight lines and curves through arched arms, angular postures, circular spinning and legs in attitude.

The three works in Dance Series 01’s middle chapter have a few things in common. Each was created by a Smuin company artist – two by current dancers and one by a former company member. All three ballets premiered in 2016, as part of Smuin’s annual choreographic showcase and each has received a well-deserved promotion to the mainstage. And that’s where the similarities end. Structured for a lead couple and a corps of eight, Rex Wheeler’s Sinfonietta felt like it might take place in the early morning, during the transition from sleeping to waking. The lights warmed on Tess Lane and Mattia Pallozzi, and each began moving gently on their own, stirring themselves out of a still state with hesitant, slightly melancholic motions. As the duo continued to wake (and as the rest of the cast joined the scene), the mood shifted to joyful energy. Lifts soared through the air, feet sparkled with a spirited pluck and the solarplexus gently rose toward the sky. Until the closing blackout, Sinfonietta continued with that same sense of exuberance. The result: delightful movement, danced with brio. I enjoyed it… but Scherzo had already provided a similar experience, so I’m not sure that they belong on the same program.

Ben Needham-Wood’s Echo was totally different from every other Dance Series 01 piece. By far the most contemporary composition on the bill, maybe even inching towards the Dance Theater genre, Echo was inspired by the Echo and Narcissus myth, a cursed tale awash with dismissal and self-absorption in which Narcissus falls in love with his own reflection in the water. Valerie Harmon and Kurta took on the principal roles, while a corps of five, costumed in dark blue, presumably represented the water. I quite liked Echo’s innovative choreography. But as a narrative piece, I have questions. Had the program not revealed Echo’s inspiration and had I not been sitting with a Greek mythology enthusiast, I don’t think I would have made the narrative connection. An anxious, desperate and tortured atmosphere was indeed clear. But a particular story? I don’t know. Though again, what did impress was Needham-Wood’s choreography, especially his treatment of the hand. Throughout Echo, hands reached outward looking for answers or maybe even an escape. They dove towards the floor with fear and trembling. With aggressive intent, dancers were dragged by their hands across the stage. In other contrasting moments, the hands spoke of care and connection. The cast stood in a line and gently rested their palms on each other’s backs. They held hands in a circle, grasping one another for support. Needham-Wood took a deep dive into one choreographic element and it worked. It conveyed emotion after emotion and I found myself tracking the dancers’ hands to see what might happen next. And Harmon’s performance must be singled out. She was absolutely astonishing – her lengthy solo towards Echo’s end riveted with its technical skill and ferocious dynamics.

My favourite of these three middle works was Nicole Haskins’ Merely Players. Players had two analogous themes running through it: a zest for physicality and community. From start to finish, the piece expertly fused all kinds of movement together – ballet, social dancing, jazz, pedestrianism, I think I might have even seen some soft-shoe footwork. The cast of ten fed on and off the stage in a series of energetic phrases, phrases packed with movement after movement after movement. There was also a distinct social element at play like the ensemble could have been attending some type of gathering together. They were having such fun, reveling in the diverse choreography and in each other. The audience was uplifted too. As they filed into the atrium for the second intermission, you could see that folks had been buoyed up just by watching the piece. It brought to mind the many Jerome Robbins’ works where youthful camaraderie reigns supreme. Works like Ballet in Sneakers and Glass Pieces, with their untamed movement and themes of kinship.

Trey McIntyre’s Blue Until June took the sixth and final spot on the program, a sensational dance suite set to a selection of Etta James’ recordings. Originally created for Washington Ballet in 2000, Blue investigates romance. I use the word ‘investigate’ purposely because like any good investigative report, the dance makes a concerted effort to look at romance from every angle. And it is highly successful. With halting shifts and abrupt pivots in direction, speed and intensity, Haskins’ solo during ‘You Can’t Talk to a Fool’ spoke of frustration and uncertainty. Needham-Wood’s smooth swagger-y jazz in ‘One For My Baby’ hinted at charm and flirtation. Terez Dean and Kurta’s ‘Seven Day Fool’ duet oozed passionate electricity with magnetic, urgent partnering. Complacency, heartbreak and longing were palpable in several other vignettes as partners walked away from each other and into the arms of someone else. One quintet found the dancers trudging through the space like zombies. Perhaps a comment on how we often run on autopilot, even where romance is concerned.

But it was Blue’s ending, set to ‘At Last’, that floored me. With hopeful and loving glances, Dean and Needham-Wood met in a tender pas de deux. The scene screamed ‘happily ever after’; that is, until you noticed what else was happening on stage. Behind them, the remaining six dancers stood completely still, their gazes fixed on the happy couple. Expressions ranged from sadness to envy to disdain to disgust. I’m sure everyone in the audience had their own take on Blue’s final moment. Mine was this – fairytale endings can happen, but they are the exception, not the norm. Some might find that perspective cynical, but one person’s cynical is someone else’s comforting.

Dance Series 01 heads to San Francisco for a two-weekend engagement at the Palace of Fine Arts (Sept 28th – Oct 6th), and returns in the spring with performances in Mountain View and Carmel. 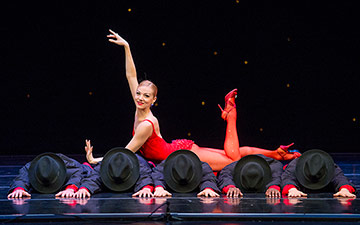