With its theme of masculinity, Panta Rei Dance Theatre’s Lullaby seems a timely choice for the Norwegian company’s Stateside debut. While the work premiered in 2015, its investigations around modern manhood is in tandem with some of the dialogue that has transpired in wake of today’s #Metoo movement.

The starting point for Lullaby and the final manifestation of the piece are, if not at odds, then an aesthetic muddle. Considering the piece is a collaboration between three choreographers – Anne Holck Ekenes, Pia Holden and Hélène Blackburn – perhaps this is not surprising.

Back in 2004, Norwegian record label Kirkelig Kulturverksted released an album titled, “Lullabies from the Axis of Evil.” The album compiled traditional lullabies from countries the Bush administration had denoted as part of the “axis,” as well as songs from Afghanistan, Cuba, Syria, Palestine and others. The contrast between these lullabies and aggressive military action seems to have bewitched the choreographers involved, who used this as inspiration to set a piece exploring different facets of masculinity today.

By using a commissioned score for cello and piano, by Sverre Indris Joner, Lullaby eliminates all connection to the traditional tunes, and with it, any of the standard connotations that a lullaby might have (soothing, warmth, comfort, etc.). Joner’s score, performed by cellist Emery Cardas and Joner on piano, is a mish-mash of tango-inflected minimalism, the cello chugging away at varying levels of intensity. One section sounded like a variation on the “Mission Impossible” theme, hovering in a state of vague anxiety. The musicality of Lullaby was more reminiscent of watching a silent film (without a live orchestra): crescendos and decrescendos may briefly punch up anxiety or pathos but the music and movement existed in parallel streams rather than any complex, interwoven relationship.

Not only was the music a disconnect from the initial inspiration, but add some random ejaculations in French spouted by the dancers, and one of them violently throwing chairs into a corner of the stage (forming a rather alarming and precarious mountain), and the confusion increases.

Taking leaps from an initial inspiration is fine, but erasing any recognizable trace of lullabies also eliminated any real tension the work might have had.

Energy seemed to be poured into fairly stereotypical definitions of manhood, particularly in the first half of the piece. Three very capable dancers – Gareth Mole, Johnny Autin and Matias Rønningen – hurl themselves at each other in different pas de trois tussles. Bodies spiral, swirl and hunch over like bulls with horns locked, the dancers grappling with each other (and their masculinity?!). The roughhousing is interspersed with moments of cave man triumphs. When Autin smacks his pecs, the machismo of soccer players and the simplistic brutality of hooligans and thugs comes to mind. Any brief cadences of momentum dissolve into monotony-there are no highs or lows. The relationships among the trio shift from sequence to sequence, who is fighting or protecting who, etc., but for the most part, from musicality to choreography and ‘plot,’ the entire pre-intermission segment is rather one-dimensional.

The second half sees the men in suits instead of cargo pants and t-shirts. They dance some formal steps, including allusions to a ballet class. Are these the men outside of their ‘native’ state, conforming to society? Violence and frustration surfaces here too, and among the highly gestural movement, dancers do things like punch themselves in the abdomen, and we are back to hostility. They move chairs around and count out loud, neither exercises really offering enlightening insight into the condition of men. If there was a diversity of emotional capacity we were supposed to witness, Lullaby fell short in showing it. Partnering was underutilized as a tool to communicate more complex emotional aspects of manhood. While I wouldn’t have wanted (nor expected) something as saccharine as Neumeier’s Old Friends, for a work purporting to be about the range of nuance in the “modern evolution of masculinity,” Lullaby only has one note. 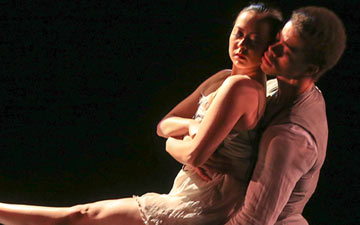 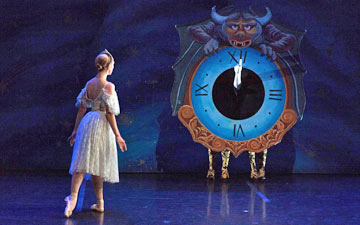 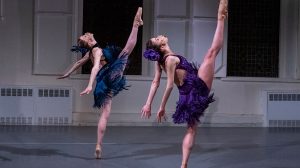