Coppélia is branded as a comedy, and on one of New York’s first truly summery days of 2018, with everyone eating gelato in the plaza at Lincoln Center, a cute comedy that ends in marriage seems an apropos way to celebrate the onset of the season.

City Ballet’s Coppélia does indeed deliver the light, breezy ballet many are familiar with. Due to the fate of the inventor, Dr. Coppélius (who is publicly humiliated and suffers a broken spirit), I’ve never considered the ballet a comedy, but I find myself in a minority. Anything with its roots in an ETA Hoffmann story has a darker side, and in the grand ballet tradition, much like most productions of Nutcracker, the staged Coppélia is (thankfully) little like Hoffmann’s “Sandman” story from which the micro-narrative of Coppélia was originally lifted.

Tiler Peck, with her quick feet and sassy musicality, is perfectly suited to the role of Swanhilda. Her choreography has copious amounts of pointework, quick steps, requires adroitness in petit allegro and excellent mime technique – all of which Peck has in abundance.

The music, by Léo Delibes, is some of the most danceable in the entire repertoire of ballet history (influencing the likes of Tchaikovsky among others), and Peck, being the musically driven dancer that she is, can’t ignore this. Her body positively sings as Swanhilda, and in her trademark manner, she finds ways to play within the music, phrasing her steps in a personal, playful way, flirting with the audience almost more than Frantz, her suitor.

Joaquin De Luz is a splendid Frantz, brimming with buoyancy, goodwill and abundant affection for Swanhilda. His smile almost never leaves his face, but doesn’t feel plastered on, and his chivalry as a dance partner is palpable. Like Swanhilda, Frantz jumps a lot, and De Luz, who gave us some gorgeous, crisp cabrioles, has a punchy delivery.

Balanchine made a big deal of using more of Delibes’ music than anyone else had at the time he restaged it in the mid-1970s. Coppélia was first choreographed and staged in France in 1870 by Arthur Saint-Léon, after he returned from his decade stint teaching ballet in Russia. 14 years later, Petipa staged it in Russia, and most companies do some amalgam of Petipa and Ivanov’s choreography (none of Saint-Léon’s original survives). Balanchine uses the Russian model, added his own touches, and collaborated with Alexandra Danilova – former lover and fellow Ballet Russes veteran – who was a renowned Swanhilda in her day.

It is true that Delibes’ incorporation of mazurkas and czardas set a long-term trend in ballet for folk divertissements. It is a shame in City Ballet’s version that these boisterous, addictively musical passages are partnered with costumes that drown the dancers. The men have sorcerer like sleeves that nearly touch the ground, long fringed culottes, and the women’s skirts seem longer than the usual folk dance costume. The male dancing is particularly athletic, and the enormous swags of fabric fly, catch on other dancers and their headdresses, and all in all, the corps (which featured many apprentices) looked a mess. How much was inaccurate musicality, lack of choreographic knowledge or costume entanglements was nigh impossible to discern.

On another regrettable costume note are Discord and War in the final act. In using Delibes’ full score, Balanchine was challenged with how to utilize music that was written to resemble some sort of vague pageant celebrating different aspects of the human experience — including time of day (dawn, prayer or sleep, etc.) and marriage and war. For war, the men are clothed in Viking helmets and Roman gladiator costumes, and the women look like romanticized Valkyries in long, asymmetrical skirts. This looked ill-rehearsed Friday night and shaky.

Robert La Fosse was a pitiful and cranky Dr. Coppélius. His best comic moment occurred trying to catch Frantz red-handed for breaking into his workshop. Frantz senses someone is behind him, turns around, and La Fosse strikes a pose, like one of his automatons. When Swanhilda reveals the trick she has played on him, that his creation did not in fact come to life, and the original doll is revealed – bent and lifeless, looking like a crash test dummy pulled from the wreckage – Dr. Coppélius is a broken man, sobbing helplessly at his automaton’s feet, his dream shattered and nothing but a life of loneliness cast before him as two young lovers run giggling out of his workshop. Some versions actually stage Swanhilda as having some remorse for her actions, but not here.

Coppélia’s storyline of an inventor who has crafted his ideal vision of a woman, who swoons for her as she comes to life, shares echoes with Pygmalion. Swanhilda tricks Dr. Coppélius into thinking a proverbial Aphrodite has granted his wish, that his magic potion to turn her into the real thing has worked. He is at first bewitched and almost in tears as her movement becomes more complex and responsive to him. Then he gropes her thighs, tries to kiss her and she swats him away. Pygmalion and Coppélia also share something with Balanchine’s concept of ballet: “ballet is woman,” especially if you take Pam Tanowitz’s view of it (“it’s a woman made by a man”). Although Balanchine’s aesthetic was starkly different from that of his forebears, he was continuing a long tradition in ballet that really took shape in the 19th century, when the form’s growing popularity was synonymous with women who appeared to be dreamy, ghostlike apparitions floating across the stage – a Romantic’s ideal of a female, as imagined and choreographed by men. Balanchine’s ballerina was different, but no less of an ideal.

In today’s world of for-hire girlfriends, copious female virtual intelligence assistants (Apple’s Siri, Microsoft’s Cortana, Amazon’s Alexa and Google’s nameless v.i. assistant all have female voices, in Japan there’s a hologram), films like “Her,” and the growing businesses in computerized (and motorized) artificial girlfriends, Coppélia’s Pygmalion-like storyline gives a sense of the uncanny that goes beyond the automaton-filled workshop – one that is all too real in the 21st century, that we have yet to shake off at least some definitions of woman as that of something shaped by or yielding to a man.

The nature of the storyline of Coppélia almost makes the idea of the uncanny its own character, and from a ballet perspective, the whole thing is quite meta. Never is this truer than in the exchanges between Swanhilda and Dr. Coppélius, when she pretends to be the doll he has created. He swoons for the puppet he crafted in his ideal likeness. 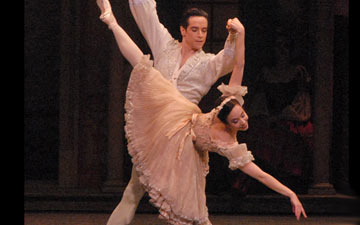