Imagine dancing on the stage of the Metropolitan Opera for the last time, gazing out into that vast hall – over 3,000 seats – with the knowledge you’ll likely never perform there again. That you will never take class or rehearse or share private jokes with this particular group of colleagues and friends with whom you’ve spent almost every waking hour since you were practically a kid. There is something piercingly sad about ballet farewells, even when, as in the case of two of the three dancers taking final bows at American Ballet Theatre this week, they are merely leaving for another company. When dancers join a troupe, straight out of school, they are full of hopes and aspirations, not all of which will be realized. Then comes the long, laborious battle for advancement, complete with disappointments, injuries, and small, hard-won victories. It’s not a life for the weak-willed.

The three dancers who took their leave this week – Sascha Radetsky, Yuriko Kajiya, and Jared Matthews – are all soloists. Each led a different cast of the company’s 1997 production of Coppélia. One (Kajiya) has been in the company for eleven years, one (Matthews) for twelve, the third (Radetsky) for nineteen. At practically any other American company, they would be principals. (Kajiya and Matthews are moving to Houston Ballet, where they will enter as first soloists. I doubt they’ll stay at that rank for long.) Radetsky, the oldest of the three, is retiring and moving on. First, he’ll play a role in the new ballet-themed television series Flesh and Bone, on the Starz network.

ABT is a particularly hard nut to crack, even within this most uncompromising of professions. Matthews and Radetsky have had to compete with some of the most theatrical, dazzling male dancers of recent memory: Ethan Stiefel, Julio Bocca, Ángel Corella, José Manuel Carreño, Marcelo Gomes, Herman Cornejo… The list goes on. Matthews has blossomed in just the last year or two, becoming both more refined and more incisive. I wasn’t able to catch his final Coppélia, but based on performances earlier in the season it’s clear that he’s in his prime. It’s smart of him to move to another company – and a good one – especially given that his life partner, Kajiya will be going with him. It’s heartening to see dancers take charge of their careers.

Houston is lucky to get them. Kajiya has always danced with polish, lightness, and sparkle. She is the kind of dancer who can slip into any role. She has performed several leading parts at ABT with distinction: Kitri in Don Q, Giselle, Olga in Onegin, to name just a few. But she’s not one to project a larger-than-life persona onstage, a liability in a company that offers the likes of Diana Vishneva, Alina Cojocaru, and Natalia Osipova. The spring season, with its big, three-act story ballets, is an especial challenge – there are all those seats to fill. But Kajiya’s début as Swanilda at the July 5 matinée revealed, once again, a dancer who can confidently carry a ballet, with modesty and charm. Her razor-sharp technique will shine all the more brightly in a less gargantuan frame. Her partner at the matinée was the young Joseph Gorak, débuting as Franz. (Gallantly, he let Kajiya take all the applause.) Gorak, a dancer of rare refinement, has revealed himself recently to be a convincing actor as well. He dances with a compelling eagerness. Gorak has just been promoted to soloist and seems destined for great things.

Radetsky’s farewell was the most poignant, in part because he has been such a stalwart presence in the company for so many years. How many aspiring ballerinas fell in love with him back when he played the handsome, sweet Charlie in the movie Center Stage? There was little bit of Charlie in all his roles, an awe-shucks quality that fitted well with his matinée idol good looks, whether he was playing the Champion Roper in Agnes de Mille’s Rodeo, one of the sailors in Jerome Robbins’ Fancy Free, or Hilarion in Giselle. (You wished Giselle would give him a second chance.) And who can forget the almost deranged energy with which he flexed and stomped next to Ethan Stiefel in Twyla Tharp’s In the Upper Room?

Radetsky’s very guy-next-door decentness and unwillingness to push himself forward may be part of what kept him from reaching the upper echelon of the company’s roster. Who knows. He left briefly for Dutch National Ballet, but returned, partly because he wanted to be closer to his wife, the ABT soloist Stella Abrera. Recently, he has taken up writing – he chronicled his retirement for Vogue – and has joined the cast of Flesh and Bone, where he will be featured in choreography by his former colleague and close friend, Ethan Stiefel.

Just as one would have expected, Radetsky’s final performance, as Franz in Coppélia (also his début in the role), was down-to-earth, in-the-moment, warm. He was a gallant and attentive partner to his Swanilda, Xiomara Reyes, who gave an authoritative, natural performance. With her diminutive size, toothy smile, and solid Cuban training, Reyes is well suited to the role. ABT’s Coppélia, staged by Frederic Franklin (based on memories of the Ballet Russe de Monte Carlo production, which he danced countless times with Alexandra Danilova) is straightforward and a little bland. There’s no hint of menace from Dr. Coppélius; the sets look as they were made out of pink gingerbread; the choreography for Délibes’s great mazurka is as plain as can be.

Within this pastel frame, Radetsky played a version of himself: a warm-hearted scamp with a twinkle in his eye, dancing everything full-out, including the mazurka in the first act. He looked slightly overwhelmed by the ovations at the end. It appeared that every dancer in New York – including Stiefel, Wendy Whelan, Joaquín de Luz, Maria Kowrosky, and even the former Joffrey star Gary Chryst, had come to cheer him on. The applause went on for a good long time and, from what I hear, continued at a restaurant across the plaza.

Who knows what was going through his mind? It must be difficult to turn one’s back on one life and begin another. But as Radetsky recently wrote in Vogue, he’ll always be a dancer, no matter what comes next: “It’s like the mafia,” he wrote there, “there’s really only one way out.” 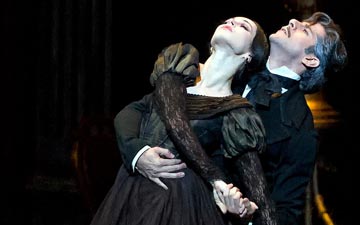